Eliminator Man vs. the State 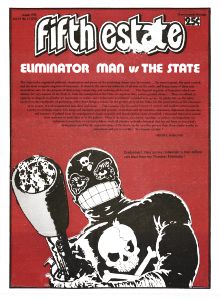 The State is the organized authority, domination and power of the possessing classes over the masses… the most flagrant, the most cynical, and the most complete negation of humanity. It shatters the universal solidarity of all men on the earth, and brings some of them into association only for the purpose of destroying, conquering, and enslaving all the rest…. This flagrant negation of humanity which constitutes the very essence of the State is, from the standpoint of the State, its supreme duty and its greatest virtue… Thus, to offend, to oppress, to despoil, to plunder, to assassinate or enslave one’s fellow man is ordinarily regarded as a crime. In public life, on the other hand from the standpoint of patriotism, when these things are done for the greater glory of the State, for the preservation or the extension of its power, it is all transformed into duty and virtue… This explains why the entire history of ancient and modern states is merely a series of revolting crimes; why kings and ministers, past and present, of all times and all countries—statesmen, diplomats, bureaucrats, and warriors—if judged from the standpoint of simple morality and human justice, have a hundred, a thousand times over earned their sentence to hard labor or to the gallows. There is no horror, no cruelty, sacrilege, or perjury, no imposture, no infamous transaction, no cynical robbery, no bold plunder or shabby betrayal that has not been or is not daily being perpetrated by the representatives of the states, under no other pretext than those elastic words, so convenient and yet so terrible: “for reasons of state.”

Caption: Credentials? Here are my credentials; a two-million volt blast from my Thanatos Eliminator!