Piss in the voting booth. 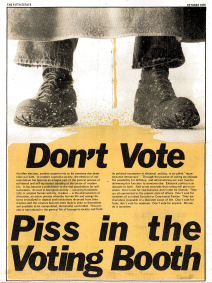 Don’t Vote—Piss in the Voting Booth
(back cover)

Another election, another opportunity to let someone else determine our lives. In modern capitalist society, the election of representatives has become an integral part of the general process of self-denial and self-repression standing at the center of modern life. It has become a prohibition to the real possibilities for self-realization. At root in bourgeois society—occurring fundamentally in creative human activity, in labor—is the phenomenon of alienation, an active process whereby human life and energy become crystallized in objects and institutions divorced from their creators and the creators become mere objects alien to themselves and available to be manipulated, dominated, controlled. This process is reproduced in the general life of bourgeois society and finds its political expression in electoral politics, in so-called “representative democracy”. Through the practice of voting we alienate the possibility for defining and administering our own lives by delivering this function to someone else. Electoral politics is an obstacle to both. And so we conclude that voting will get us nowhere. Don’t vote for reactionaries, don’t vote for liberals. They are all committed to the present state of affairs. Don’t vote for members of so-called Socialist or Communist Parties. They are charlatans incapable of a liberated vision of life. Don’t vote for fools, don’t vote for wisemen. Don’t vote for anyone. We can do it ourselves.