Tough times had befallen the Easy Space Theater, and to help them pull out of their financial woes, the Somebody Else Players called in the help of that perennial moneymaker, Jerry Loose, for a grand Begathon.

It opened with Loose dancing out on stage, cigarettes stuffed up his nose and dressed in a sleazy Las Vegas suit. This guy was disgusting. 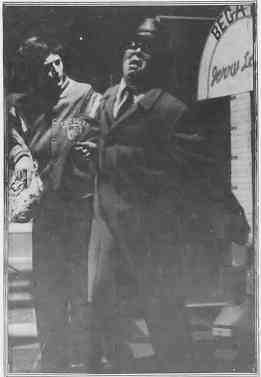 What followed was a series of hilarious skits ranging from scenes in a park to a trip out east, to the Finale, the Shit Lady. Each skit brought on more tears of joy than the one preceding, but several times when the audience was left feeling really up, long scene changes brought them painfully back to earth.

But the plays went on, and so did Jerry, with his hack jokes and threats when the cash flow backed up. Jerry, getting more violent with each passing skit, finally lost his cool when he was informed that someone had absconded with the Begathcn funds, including the grand he’d donated himself to get the ball rolling (knowing, of course, that he’d be reimbursed).

In a last-ditch effort to get back his earnings, Loose, a lapsed catholic with a grudge, dragged a nun from the audience and threatened to shoot her if no one came up with the money. As his finger squeezed the trigger (the crowd watching and laughing) a priest emerged from the audience and bargained Jerry down to $1,850 from $2,000 (after telling Loose at one point to “Shoot ‘er”). Loose then turned his pistol toward the audience, saying “That does it for the christians, now for you atheists!”

Photos: Above is a little stop-action from one of the park scenes in last December’s Easy Space performance, while on the left is a shot of an unknown leader visiting Detroit. When asking one of the leaders many welcomers who this strange man is, they replied by telling us that all questions would be answered come April Fools Day.