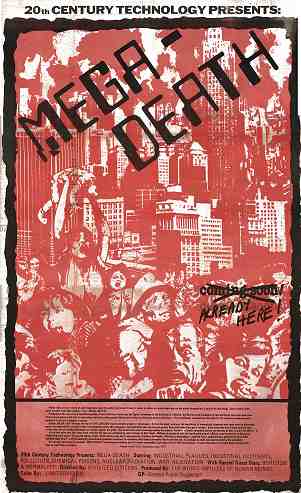 Rarely does a horror movie of such magnitude reach the public, but when it does, it seems to obtain an unshakable grip on the public imagination, if not on its very being. Such a movie is the latest product from 20th Century Tech.—MEGA-DEATH’

Produced at the cost of an unspecified number of lives (industry rumors put the figure somewhere in the hundreds of millions), the directors and producers of this full-length epic have used some of the most sophisticated and, in many cases, the most subtle special effects yet to keep our attention glued on the show. This is definitely a production that calls for the utmost in audience participation if it is at all to become a success.

Briefly, MEGA-DEATH traces the rise of CIVILIZATION from its bloody origins to the present. At first the beast, posing as the benefactor of humankind, is greeted with open arms by those who see in it an opportunity to exploit their circumstances; those who recognize a bad deal when they see one are quickly destroyed when they get in its way. Even those who don’t much care one way or the other are eventually eliminated as it rapidly engulfs the globe. But as the film’s time frame approaches the present, the beast is finally unmasked and we are allowed, at last, to see it for what it is.

It is at this point that the scenes from everyday life take on a vividness so real as almost to defy belief. Millions of people all over the world getting up at 7:00 am to go to work or to buy; grey, lifeless industrial regions juxtaposed against bright, lifeless (have a nice day!) communities of tedious familiarity. Pollution is everywhere: polluted water, polluted food, polluted air (even light polluted night skies!), and the seemingly domesticated populace continues to reproduce this hideous normality day in and day out. It’s enough to make one want to destroy the projectors.

But enough said about its contents. MEGA-DEATH is showing everywhere and it’s almost impossible to get away from it—but try we must. It seems these days if we want better movies we’ll have to make them ourselves.

Produced By: THE WORST IMPULSES OF HUMAN BEINGS