Welcome to our Spring 2000 issue. The last one we published was dated Summer 1999, so subscribers and libraries, please take note; you haven’t missed any intervening papers. This edition is numbered 354, the previous one, 353, so we are trudging along, even if not very quickly. 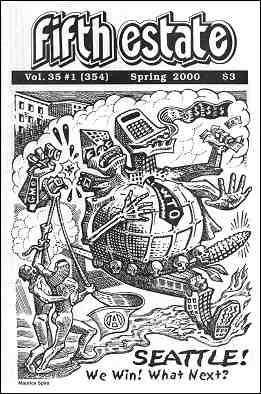 We’re grateful to have Maurice Spira’s inspiring and hilarious graphic grace our front page, and are pleased to be able to give extensive space to the discussion regarding tactics and strategies following the Seattle WTO demos. As David Solnit suggests in our page one article, we could very well be on the cusp of a new period of contestation.

By the way, the 34th anniversary of the paper slipped by last November, our first issue having hit the streets of the Motor City in Fall 1965.

Thanks to all of you for your patience in between issues and your support. We barely squeaked through financially this issue. We made extraordinary expenditures during the first half of last year on much needed new computer and other equipment, and then footed a hefty print bill for our full color last edition.

Now, we’re faced with having to purchase a new monitor because the one we got used on a “deal” lasted about six months before dying. Aren’t computers wonderful? So, all extra support is welcome!

The paper remains financially solvent, but only because of the continuing generosity of our Sustainers, those of you who include a little extra when renewing your subscriptions, and the flow of book orders, new subscriptions and prompt renewals.

There have been three successful anarchist community dinners held since December. The first brought an overflow crowd of 120 to the Xicano Development Center to hear Detroiters who had returned from the Battle in Seattle, and to view a video shot in the heat of the action against the WTO.

The second dinner featured a presentation by comrades from Chicago’s A-Zone, who described Anti-Racist Action efforts against local fascists, and the arrests they had sustained.

The Brown Berets, who operate the Center, which includes the offices of the IWW’s Industrial Worker newspaper, told about several community campaigns they were undertaking in defense of victims of police terror. Finally, we watched a bootleg copy of TV’s “Sixty Minutes II” which featured six anarchists from the Eugene, Oregon community discussing the WTO trashings. There was also a cameo appearance by Fifth Estate contributor, John Zerzan.

The third included a report about the recent government crackdown on the student occupation at Mexico City University. Excellent food was provided by the local Food Not Bombs group for each. We intend to continue the gatherings on a monthly basis and may show Ken Loach’s “Land and Freedom,” film about the Spanish Revolution.

Don’t Throw Them Out! Please don’t consign old Fifth Estates to the trash barrel or recycle pile if they’re in good condition, especially if you have bulk quantities.

We still get requests for decades old editions and would rather issues molder a while on our shelves than get thrown away.

We are in particular need of two recent editions: Spring 1996, #347, which features the “History of the Fifth Estate” on the cover, and Summer 1998, #351, with the headline, “Welcome to America” on the cover. Even single copies of these will be appreciated. We will cover postage upon request.

And, speaking of back issues: we need a volunteer to catalog our back issues, some of which date back to the 1960s. Currently, they sit in random stacks, being almost useless since they are in no particular order. If you’re interested, give us a call at the office.

Only in Detroit Department: Pope John Paul II, whose commitment to the most conservative wing of Catholicism is matched only by his arrogance, made a trip to India in November to urge evangelizing among the heathens (that is the established Hindu and Muslim religions).

This is no different than the attitude that accompanied the first European explorers and conquistadors who led the way to the genocide, colonization, and slavery sanctified by the Church.

Realizing that in an era when anti-Christian violence perpetrated by Hindu fundamentalists was at its highest in decades, the New Delhi government was understandably worried about the Pontiff’s safety. The Pope spoke at the city’s Nehru stadium surrounded by 3,500 Indian paramilitary troops, but rejected an offer to erect a bulletproof screen for him as he said mass.

In the Pope’s 21-year reign, he only once accepted such a measure; where? You guessed it—at a 1987 mass in Detroit. What was he worried about as he spoke in Hamtramck? Street gangs; getting pied?

Several companies broker subscriptions to this newspaper for libraries and institutions and rake off a small commission for their services.

Since this means subs at a higher rate than individuals pay and that the paper is available at the libraries for readers and researchers, it works out well for us.

Recently, we received a call from an employee of one of those firms who said, could we please send a sample copy to a prospective subscriber. Who, we asked?

A government agency, came the reply.

Silence, followed by a sigh, and an exasperated, OK.

Our sub rate to government agencies and corporations is $100, but that’s still too little to charge the secret police. Why wouldn’t they just subscribe under a phony name and send it to one of their funny little mail drops?

Everything changes; everything stays the same, as the old expression goes, and the truth of this saying can be seen in the current assault by the Detroit Newspapers on their unions.

In a telling piece of history from Carlotta R. Anderson’s excellent biography, All-American Anarchist: Joseph A. Labadie and the Labor Movement (Wayne State University, 1998, available from FE Books for $35), a paragraph from a section about the union struggles of the 1880s states:

“Labadie was another featured speaker [at a mass meeting of the Trades Council]. He urged the audience to join the typographical union’s boycott against the Detroit Free Press for its twelve-year refusal to employ union printers and pay union wages. ‘Just as long as it boycotts us, we will boycott them,’ he roared out. Fifteen hundred copies of a ‘Black List’ circular were distributed, listing Free Press advertisers who should also be boycotted.”

The good news is that the paper capitulated and recognized the unions in 1886 during a wave of labor militancy and agitation for the eight-hour day.

Below: “Workers of the World, Relax,” a digital reconfiguration by Stephen Goodfellow, of a section of the 1932 Diego Rivera mural, Detroit Industry, which occupies four walls in the Detroit Institute of Art. The original, depicting workers at the Ford Rouge Plant, appears below it. Although Rivera meant his work to be a paean to industry and labor, he couldn’t help but present it with its ambivalent characteristics—humans enslaved by machines, the domination of nature, workers subject to the whim of grim bosses.

Is there a bar code in our future? Probably. In fact, there may be one on the issue you are reading if you bought it at a retail outlet, placed there to track sales. Increasingly, stores and distributors demand placement of them on the cover. We’ve held out so far, but we may have no choice.

Even if you requested a free subscription, it this is the first issue of the paper you’ve received, you will not automatically be put on our subscribers’ list unless you fill out the blank further back in this issue and indicate you are a prisoner.

Also, due to a departure of a Fifth Estate staff member, we can no longer fill book requests for imprisoned subscribers. Another source is Books To Prisoners, 92 Pike St., Box A, Seattle WA 98101.