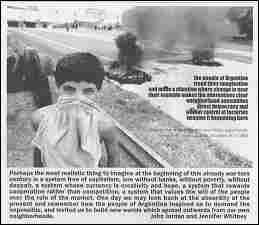 From the text of the Puppetista Street Theater pageant at the School of the Americas action, November 16-17, 2002.

the people of Argentina

and made a situation where change is near

their example makes the alternatives clear

Perhaps the most realistic thing to imagine at the beginning of this already war-torn century is a system free of capitalism, one without banks, without poverty, without despair, a system whose currency is creativity and hope, a system that rewards cooperation rather than competition, a system that values the will of the people over the rule of the market. One day we may look back at the absurdity of the present and remember how the people of Argentina inspired us to demand the impossible, and invited us to build new worlds which spread outwards from our own neighborhoods.