After the disaster that struck the Gulf Coast in the wake of Hurricane Katrina, during the total failure of the government response, the first health services available in New Orleans were set up by anarchists and local residents. 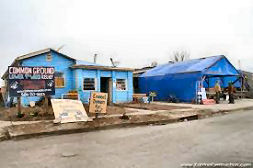 The hub of this mutual aid effort was the Common Ground clinic, operated from a mosque in the Algiers neighborhood by former Black Panther, Malik Rahim, local residents, out-of-town anarchists and other radical activists. While local, state and federal governments were in a state of chaos and incompetence, neighbors organized their own spontaneous mutual aid, helping to rescue people from flooded homes and procuring food and supplies. Even some bars in the French Quarter established themselves as DIY relief centers.

The anarchist response to the hurricanes has been an outpouring of mutual aid, solidarity, volunteers from all around the country, media, and much more. Within days of the hurricane, activists created an email list to coordinate relief efforts. Nationally, money was raised and supplies were acquired for relief caravans that streamed South to the afflicted areas.

Anarchists and medics left from Washington, D.C. and Asheville, N.C. to help start the Common Ground Clinic. Infoshop News covered the situation in New Orleans, the mutual aid efforts, and helped raise money for Common Ground and other anarchist relief projects. Providing food and medical care were the first priority. The Bay Area Radical Health Collective sent a vanload of medics, nurses, and doctors. Arizona and Hartford, Connecticut Food Not Bombs fed people along the Gulf Coast and in New Orleans. The Rainbow Family organized a café in Waveland, Miss. and two kitchens/clinics in New Orleans.

Several anarchists helped begin the Four Directions Relief Effort, a project that is organizing assistance for Gulf Coast native tribes who have been devastated by the hurricanes and years of capitalism, racism and government abuse.

This brief overview can’t capture the full scope of anarchist actions in response to the hurricane tragedy. Relief and clean-up efforts are ongoing. Volunteers and donations are still welcome and needed by these alternative projects; check out their web sites and become part of the effort to show that anarchism works in the real world in a manner superior to government: