When I learned of Octavia Butler’s death in late February 2006, I fought the feelings of loss. A longtime fan and student of her science fiction and fantasy, I never stopped sensing synchronicity and strangeness when I found that other radicals were reading her work. On the occasion of her passing, London’s Independent described her as “the central figure in the relatively close-knit community of black writers of the fantastic in America.” 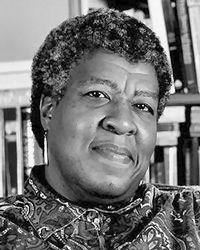 Her critical and troubling treatment of hierarchy and humanism or identity and ideology always impressed readers. At the same time there was always something unsettling and uncomfortable–perhaps even conservative or reactionary–about her work.

To honor her passing, I picked up her last book, a vampire novel called Fledgling, published by Seven Stories Press, better known for its lefty nonfiction titles. While devouring this parting narrative–her books are often intoxicating page-turners–I immediately saw connections to the first book of hers I read, Dawn.

Dawn’s most daring maneuver was not the unattractive aliens on the breathing bio-ship that rescued the xenophobic humans after a nuclear holocaust–nor even the seemingly benevolent freaks’ rejection of humanity’s apparently inherent hierarchies; rather, Butler busted boundaries with bizarre, kinky, and blissful] psychedelic interspecies sex. Even though the humans cannot hell but like it, do they really want it? As one might imagine, the issue of permission is problematic here; do the humans choose to breed with their apparently terrifying and tentacled saviors and captors? Is this patronizing servitude masked as emancipation?

This touchy theme emerges again in Fledgling. As the young vampire protagonist Shari collects her harem of symbionts, the reader wonders whether this relationship is actually symbiosis or slavery, consensual or contemptuous. Fledgling lacks aliens but remains freaky; at least the vampires look human. But this time, we add polyamorous, interracial, and intergenerational sex to the mix. The vampire collectives function as bloodlinked free love communes–of a sort.

But since the symbionts need the vampire kiss like a junky needs his needle, it’s difficult to define this as a liberated relationship.

Reviewing Fledgling in the Washington Post, Ron Charles comments, “How many of our happy relationships involve a degree of dominance or dependence that we can’t acknowledge? This is Butler’s typically insidious method: to create an alternative social world that seems, at first, alien and then to force us to consider the nature of our own lives with a new, anxious eye. It’s a pain in the neck, but impossible to resist.”

While some might see this as a flaw in Butler’s ostensible critique of hierarchy, we can also interpret this as her most complex and worthy challenge to all anti-authoritarians. Just declaring oneself an enemy of domination and hierarchy does not guarantee cooperation and mutual aid. While focused on institutional ills of wealth, war, and waste, dissidents often claim an ethical high ground. But at the social and interpersonal level, in daily life, can we be so boastful about our radical practice? Are our ostensibly radical groups contaminated by our conditioning, permanently predisposed to interpersonal inequity in “power-over” relationships?

Throughout her novels, Butler constructs characters that encourage us to tackle a thicket of contradictions concerning race, gender, and communal relationships and refuses to provide perfect answers to difficult questions.

In the near-future North American dystopias depicted in Parable of the Sower and Parable of the Talents, Butler shows a social, ecological, and economic breakdown that resembles what we’re experiencing today. With the first tale set in California, a small utopian cell carves out its version of a better society amid a horrible scenario that resembles the southern California, right-wing, fundamentalist, capitalist panic amid extreme poverty described by Starhawk in The Fifth Sacred Thing.

But are the alternatives proposed by Lauren Olamina and the Earthseed collectives really radical? In Scraps of the Untainted Sky: Science Fiction, Utopia, Dystopia, Tom Moylan gives Butler a sympathetic reading but also teases out the limits in her vision. Moylan contends, “Butler’s continuing portrayal of Earthseed more closely resembles separatist millenarian communities that opt out of secular political struggles to make themselves ready for their ‘ultimate’ destiny by immersing themselves in the immediate practices of everyday life.”

This appraisal, of course, resembles the stern but familiar assessment that today’s intentional communities cannot be politically relevant because they have simply dropped out, choosing enclaves to protect countercultural privilege instead of barricades to challenge cultural power.

Moylan continues, “Although this position takes Earthseed’s mission out of the arena of direct engagement–with the Christian Right and with the liberal opposition–it still reaffirms a radical vision that in the tradition of separatist communities represents a signpost to a different way of life. But because of the abstract nature of this apocalyptic position, the political vision of Earthseed–within and without the text–loses its immediate connection with processes of engaged militancy.”

Today’s communards have likely lost count of the number of times their critics have dismissed any claims to an embryonic success at crafting the new world as mere “New Age discourse nuanced with an ethos of survivalism,” the same evaluation levied on Earthseed by Moylan.

To further muddle matters, Butler’s hopeful hereafter is not the Christian heaven, but the spaceship that will take the people to the stars. Now, Butler places herself squarely in the esoteric movement of Afro-futurism. Before we dismiss it entirely as crazed conspiracies, techno-fantasies, and Farakkhan-like UFOlogy, look at where this critique comes from.

The Afrofuturism.net website poses questions like, “Have futurism and science fiction become the most effective way to talk about black experiences? How do these themes refer to the history of the African diaspora, yet imagine possible futures, futures that enable a broad range of cultural expression and an ever-widening definition of ‘blackness’?”

Within the context of diasporic thinking, the futurist position makes more sense. For those so alienated by racism, an alien or outer space society seems strangely comforting compared to the harsh bigotry of humans addicted to racist dualities. Butler’s affinity for the alien, the outer, and the other is also a harsh, transhuman diagnosis of how racial and species purity perpetuates itself. Is it altogether unfair to criticize the white America Butler worked and wrote in as largely dominated by an unruly caste of greedy, violent breeders?

For a class categorically denied a future, claiming the future can be a conscious, radical act. In Against Race: Imagining Political Culture beyond the Color Line, Paul Gilroy explains:

“Barred from ordinary humanity and offered the equally unsatisfactory roles of semi-deity, janitor, or pet, artists seek, like Sun Ra, another mode of recognition in the most alien identity they can imagine. The momentum they acquire in moving from the infra-human to the superhuman finally carries them beyond the human altogether. You will believe a man can fly. That critique is still lived and enjoyed as both counterculture and counterpower, formulated as the junction point–the crossroads–of diaspora dwelling and diaspora estrangement.”

Moreover, when looking at Afro-futurism’s contribution to popular music, film, and literature, it’s important to see the common themes and theories as suggestions and speculations, projections and prophecies. In some cases, the futurists approach their fantasies quite literally and religiously, but we shouldn’t assume this nor dismiss them entirely on the grounds that their art is too fantastic.

Nonetheless, the profound relevance of Gil Scott Heron’s “Whitey on the Moon”–a scathing poetic indictment of sending a white man to the sky–could mean just as much to this discussion as trying to send a black woman to Mars. While Heron and Butler would likely disagree about building the starship so soon, they’d likely share an active, articulate, and unapologetic antiracism.

Escapist dystopias can be as enlightening and engaging as they are infuriating and depressing. In her books, Butler brings us the best and worst of other worlds and ours. With her career cut short, the last promise Butler leaves us with is that of small collectives–that are always of mixed ages, races, and species–carving out small niches for survival and contending with future horrors and future hopes.