Twenty Years of the Black Flag in Turkey

The first anarchists on the land which is today Turkey were probably Armenians. Active during the fin-de-siecle of the great Ottoman Empire, they included prominent figures such as Alexander Atabekian, who published pamphlets, participated in Armenian revolutionary organizations and most likely traveled to Istanbul and Izmir to promote anarchism in Armenian circles. The Armenian anarchists mixed anarchism and nationalism, although this exact relationship – and their broader relations with various nationalist and modernist activities – still needs to be looked at more closely. (Although there may be more detailed sources about Atabekian’s anarchist activities, a general picture can be found at http://www.anarkismo.net/newswire.php?story_id=3771)

However, the early Turkish revolutionary idealist and nationalist movements (the “Young Turks”) did not show an anarchist influence, despite some similarities. One of the few exceptions were some activists in the Committee of Union and Progress (CUP), who were influenced by the French anarchist Jean Grave. However, their central committee was openly critical of anarchism.

As far as we know, the first anarchist book published in Turkish was the 1935 translation of Peter Kropotkin’s Ethics. But besides this single work, it wasn’t until the 1960s that anarchist books were published again in Turkey. It was a politically active and exciting era for the world, and Turkey was no exception. These books suggest that, in the enthusiastic atmosphere of the left wing revival, Turkish revolutionaries and readers examined (and possibly used) anarchist strategies and tactics. But prominent figures didn’t define themselves as anarchist, and there was not a single self-identified anarchist group among the numerous Marxist-Leninist-Maoist etc. factions.

The military coup d’etat of 1980, led by General Kenan Evren, dominated life in Turkey. Hundreds of thousands were arrested, and many of them were tortured and executed. This massive defeat for the Left opened the doors for liberalism, globalization, capitalism and Islamism. (It was at this time that putschist generals decided that Islamism should be promoted among lower and middle classes to prevent a new left wing movement.) After 1983, president Turgut Ozal began a new phase of government which sought to be in harmony with the Thatcher-Reagan regimes. 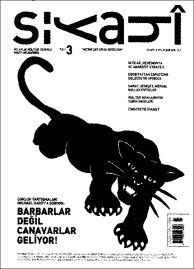 Anarchists did not appear on the political and cultural scene of Turkey until 1986. Because of this, modern Turkish anarchism was born into a boring and, compared to the 1970s, apolitical environment. But the country was still full of communist intellectuals discussing how to respond to the political situation, and only slowly did new theories begin to enter the scene. In 1986, Turkey ‘welcomed’ Kara, the first magazine published by people who called themselves anarchists and who openly defended anarchism. As they were mostly ex-marxists, this became the starting point for contemporary Turkish anarchism. The first anarchist book published in this new wave of anarchism was Ida Mett’s Kronstadt 1921, suggesting that the anti-Bolshevik arguments were of more interest than the ideas of anarchism itself. For these early anarchists, their debates with marxism were quite important. Since the publication of Kara many anarchist publications and groups have appeared in Turkey, which opened the way for a younger generation of anarchists.

In the 1990s, there was a huge explosion in anarchist publishing. These works included texts from the classical tradition (including Proudhon, Bakunin, Nechaev, Kropotkin, Goldman, de Cleyre, Tolstoy, Malatesta and Rocker), histories of the movement (by Avrich, Marshall, Woodcock, George Crowder and Paul Thomas, as well as works on the Spanish Revolution), and contemporary anarchist theory (Perlman, Bey, Zerzan, Bookchin, Ward, Purkis and Bowen, and post-anarchists May and Newman). This publishing wave has also included works not available in English, such as Hans Jurgen Degen’s Anarchismus heute and Rolf Cantzen’s Cantzen’s Weniger Staat – Mehr Gesellschaft, Freiheit/Okologie/Anarchismus.

In Turkey today, people know that anarchism is not a word for chaos, but that it refers to a political philosophy with a revolutionary past and even an active present! In 1990, it would not be uncommon to talk with political activists who had never heard about anarchism as a political movement. Today, if you met someone like that, you don’t try to tell what anarchism is–they are either lying or not really interested in politics.

During these last 20 years of the black flag in Turkey, anarchist influences on the queer and anti-militarist movements have been quite significant. These movements may not be anarchist in name, but they are both influenced by it and utilize similar organizing structures. Other groups like the Turkish surveillance camera players (‘Nobese’) and Turkish Food Not Bombs are also either anarchists or are very close to anarchism.

Universities and academic research are still closed to anarchism, and it is very difficult to write an anarchist-based thesis or to do research on anarchism, especially when compared to marxism. However, it looks like this will change soon, as more and more students and young professors are interested in anarchism. There are also more intellectuals, writers and political theorists who are aware of anarchist literature and politics.

Anarchist collectives and publishing groups have also spread from the large urban areas (like Istanbul, Ankara and Izmir) into many of the smaller cities. People seem to be getting used to seeing anarchist iconography such as black flags, Circle As and other anarchist graffiti. Anarchist t-shirts are a common sight. We even have ex-anarchists today — a new phenomena for Turkey! Before, it was always ex-marxists who became either anarchists or something else, while today you find the reverse. This may be a great achievement for anarchism in Turkey. :)

Strangely, Turkish anarchists have had problems with participating in the ‘anti-globalization movement’, as well as with working with grassroots groups. There were different reactions to what happened after Seattle in 1999. One magazine criticized the Zapatistas for being militaristic (even while at the same time applauding the Unabomber!). Another group initially joined the protests in Europe and participated in black bloc actions, but soon decided that it was only rich Western boys playing politics. Instead they started publishing things about middle eastern anarchism, the hidden racism in Western anarchist circles, etc.

One of the problems is that Turkish anarchism(s), while growing much larger after the 1990s, failed to create a different political culture than the older Marxist one. There were and are exceptions, but anarchists have tended to behave either too subculturally or too orthodox. Whenever they wanted to be more political, the closest exit was orthodox Marxist understandings, and part of borrowing their ‘know-how’meant underestimating grassroots politics. (Strangely, some Trotskyist groups seem more open to grassroots politics and being involved in the Movement of Movements.)

It is also important to keep in mind the tensions within Turkish society itself. Historically, socialists have not accepted the secular capitalist /Muslim religious divide as the main political division of Turkey. From a socialist or communist point of view, the main division, as you can guess, is class. Instead, it is secular Kemalists (populist nationalists) and liberal capitalists who usually promote secular / Muslim divides as the main problem in Turkey. By doing so, the seculars/liberals/Kemalists portray themselves as the most important progressive (even leftist) forces in the country, and so gain more power to do whatever they desire to oppose the Islamists.

Nowadays, fantasies of the ‘clash of civilizations’ are popular and people are choosing either the East or the West. But Turkey has always been in the middle, or on both sides, and there have always been long debates about which side priority should be given to. There is tension between pro-West and pro-East people; between pro-West people and anti-imperialists; between pro-US people and pro-Turkey people (who see the US as a threat and an enemy); between pro-EU people and pro-Turkey/pro-East/ anti-EU people (nowadays some Social Democrats have turned anti-EU while some Islamists are pro-EU!); and of course there is growing Turkish-Kurdish tension. There is also intra-Muslim tensions between Alevi (a heterodox Islamic sect) and Sunnis (the majority orthodox sect). And of course there is Muslim-Christian tension in the eyes of Sunni Islamists, as Turkey is in the Muslim part of the world and Christians are generally seen as ‘somewhere else.’

So even while anarchism is a vibrant movement in Turkey, it is not a ‘must consider’ actor on the national level.

And because of the ‘clash of civilizations’ fantasies, there is a general weakening across the spectrum of leftist movements which are not nationalist of some sort. And although there are anti-West anarchists, we still don’t have nationalist-anarchist movements, even while there are many nationalist-marxist ones. At least Turkish anarchists have not committed every sin!