The past few years have seen an explosion in politically conscious hip-hop, with many artists like Rebel Diaz and Final Outlaw gaining widespread recognition for their affiliation with Occupy Wall Street and other social justice causes. 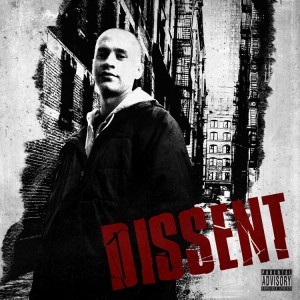 Add to this list another up and coming emcee, Johnny Spanish, whose free mix tape Dissent can be found online. Originally from Louisville, Kentucky, but currently living in Brooklyn, Spanish says Dissent “[was] heavily influenced by my anarchist beliefs and was my first real foray into explaining my philosophy.”

Featuring polished production by Ghost Beats, strong hooks showcasing Spanish’s hybrid style of singing and rapping, and some intelligent and incisive lyrics, Dissent sounds on the surface like it has a lot for the politically-minded hip hop head to be down with.

The tracks “Control,” and “Never Be Still” are particularly strong, with “Control” featuring the most powerful hooks of any track on this album, and solid verses offering a tongue-in-cheek critique of the American dream. The hooks of “Never Be Still,” don’t get me quite the same way but the verses are superb, illustrating visions of a fallen world, and a possible post-apocalyptic future.

Dissent has a lot to offer, but after close listening, I can’t give it my endorsement because of the lyrics to “Hate Me,” the third track on this tape. On the surface it presents a pretty standard criticism of the proverbial game that is hip-hop, but Spanish falls into one of the classic lyrical traps that turns me off from a lot of otherwise good hip-hop–resorting to gay bashing, and using homophobic language to describe those he is critical of.

While it is perfectly legit to question the Internet hype machine that is so integral to how new acts establish themselves, when Spanish tries to set himself above such things with the words “But I’ve been doing this for way too long / To be caring ’bout some motherfucking gay dudes blog,” the use of a homophobic slur kills his credibility with me. This isn’t the only instance either.

At two other points in “Hate Me,” the term “faggot” is used in a derogatory way. “For all the records your faggot little clicks’ got they hands on” and “Computer nerds got big off of some dot com boom / Little faggots gone get logged off soon.”

These sorts of expressions are an all too common part of hip hop lyrics, and it is a shame to see an emcee who allegedly holds anarchist beliefs propagating the same prejudices as his mainstream counterparts. There is no place in anarchism for homophobia, friends.

Dissent has some great moments, but the homophobic slurs hold me back from liking this. It is clear that Spanish is a gifted emcee with a bright future–I just hope that he can progress creatively beyond hate-filled lyrics, and take his game to a higher level.

The only divisions in hip hop should be the dial between the bass and the treble.