“They’re in there for us; we’re out here for them!”
—IWW slogan

The fight for our imprisoned comrades can take many forms of solidarity. The protest at Carswell prison in Fort Worth on June 5 was a rowdy and exciting example of what support can look like. 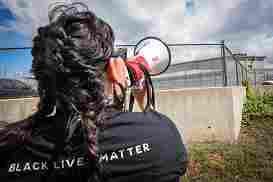 It was loud, it was public, and it was powerful for both the people inside and outside the prison. But sometimes our support necessarily takes a much more personal, but equally powerful form.

Visits from friends, family, and comrades are repeatedly identified by prisoners as one of the most important life lines that exist for them. Without visits, the crushing isolation of life inside a prison becomes unbearable. Maintaining connections with people on the outside helps people inside fend off the isolation that prison so forcefully engenders. And, it helps us on the outside stay connected to people who remain an integral part of our struggles and our communities. Real human connection is the thing prison tries the hardest to crush.

However, visits can often be prohibitively expensive for people who have imprisoned friends, loved ones, and comrades. Travel costs might include not only an expensive plane ticket, but also lodging, a rental car, and meals. These quickly add up to hundreds of dollars.

Project FANG was established in 2016 by the NYC Anarchist Black Cross as a much-needed attempt to fill a gap in the ongoing support work for earth and animal liberation prisoners in the United States. By providing visitation funds, FANG maintains the vital and imperative connections between inside and out.

Julie, a friend of Marius Mason serving 22 years for eco-sabotage, says, “The U.S. government is holding Marius Mason in a high security prison far away from his closest friends and family, making it very difficult and expensive to visit. This isolation has been painful for him and everyone close to him. The work FANG is doing to subsidize visits to prisoners is extremely important in fighting this oppressive and unnecessary system, and there is no end in sight for the incarcerated.”

Funds are available through project FANG to prisoners who meet two basic eligibility requirements: 1) that they were arrested for earth/animal liberation activities and 2) that they have adhered to the imperative of non-cooperation with the state. Currently, project FANG provides funds for about a dozen eco/animal liberation prisoners on a quarterly basis including Marius Mason, Rebecca Rubin, Justin Solondz, Tyler Lang, Brian Vaillancourt, Joseph Buddenberg, and Nicole Kissane.

Each eligible prisoner could receive funds for a visit four times a year. However, this depends on the ability to keep replenishing the funds. While FANG currently receives a very generous recurring donation from its primary funder, that money is increasingly being more quickly depleted. This is good! It means that people are using the fund and incarcerated comrades are receiving much needed visits.

But FANG organizers say it also means that they need to expand their fundraising efforts if the project is going to continue providing this support. Also, they want to expand project FANG at some point in the future with the eventual goal of offering funds to anarchist prisoners.

“Right now,” says one of the organizers, “our primary funder has requested that the funds focus on eco/animal prisoners. While we are not at the point quite yet, where we can expand to supporting a wider range of prisoners, donations we receive in the coming months will move us closer to that goal.”

Pepper Kincade is an anarchist from Charleston, South Carolina who is focused on providing support to those imprisoned for the struggles of earth and animal liberation.

How to Help Project FANG

Information about project FANG is at nycabc.wordpress.com/fang.