The Art of Richard Levins Morales

Telling our stories and holding our ground 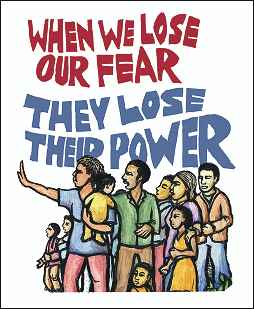 The art of Ricardo Levins Morales is rooted in the soil of the struggles that shape our lives. Inspiring, empowering and validating, his images both document and embody collective visions of unity in the face of power.

As a result of working with the Northland Poster Collective in South Minneapolis for over thirty years, Levins Morales has developed core insights about how art can be a powerful part of strategy in movements.

His art is a powerful element in the narrative of liberation, imagined in tandem with those in the struggle. At its core is always a vision of hope.

He describes his art as a form of medicine and his role as much organizer and story-teller as artist.

His conception of the role of art in organizing is that, “The soil is more important than the seeds. The cultural environment in which any organizing campaign takes place is going to determine the outcome.”

This environment is shaped by the beliefs, ideas, values, and narratives in which peoples’ movements plant our seeds as projects, initiatives, campaigns and organizations. For this reason, he advocates that social movements include cultural work that helps shape narratives to enrich that soil.

“If you have seeds in toxic soil that won’t grow the only way is to add fertilizer in the form of funding. This is why it can be hard to sustain projects without going to the one percent for money,” Levins Morales says. He argues that by controlling the story and ensuring it is told by and in the voice of those directly involved in struggle, the barriers to success can be lowered.

In New Orleans after Hurricane Katrina in 2005, he worked closely with The New Orleans Workers’ Center for Racial Justice against a backdrop of neo-liberal political economy that pitted communities of color against one another for jobs and scarce affordable housing.

In the wake of the storm and the years of corporate re-development that followed, a group of black and immigrant workers came together from public housing developments, FEMA trailer parks, day labor corners, and labor camps across Louisiana to build a new freedom movement—multi-racial, committed to racial, gender, and immigrant justice, and dedicated to building power at the intersection of race and the economy.

This new group needed a unifying message and images to unite communities around shared interests and against the power structure displacing them, imposing privatized schools, raising rents and deportation round-ups. With Levins Morales’ help, they chose the theme of, “The Right to Remain with Dignity,” using the slogan and his art all over the city.

The unifying message helped re-frame the issue so that people who were set up to be in conflict became allies and established a unified front to fight the city power structures and neo-liberal re-development, advocating both for returning residents and the workers who re-built the city after the storm and forcing the Sheriff’s Department to stop working with ICE against undocumented workers.

In 2017, when the Minneapolis Police Department (MPD) celebrated its 150± anniversary, police abolitionists in the city seized the opportunity to shift the discussion of police violence in Minneapolis from advocacy of procedural reforms to meaningful structural change.

They sought to define a practical path for dismantling the Minneapolis Police Department (MPD), the transference of its social service functions to community-based agencies and organizations, the replacement of its emergency intervention functions with models not based on military methods, and the redirection of resources to support community resilience and people-directed development.

In addition to an extensive report, the project encompassed a great deal of artistic and cultural work, including pop-up history displays, teach-ins, films, murals, performance, essay contests, and other projects to inspire a rethinking of popular assumptions about the permanence and inevitability of the police.

Levins Morales was part of the project from the beginning. He says the project is unique and hopefully transformative because it is based on a narrative strategy about shifting consciousness rather than sitting down and talking with the mayor and the police.

Levins Morales returns again and again to the themes of narrative and culture, of a need to be mindful of the soil in which our movements grow. He knows the revolution is about the long-haul and that revolutionary struggle requires a revolutionary culture to thrive.

This culture is built in large part by telling our stories and claiming our ground.