The Authoritarian State Remains the Same

The Cuban state has usually been able to keep a tight lid on protests. Generally, it only allows demonstrations that have been organized by government ministries. However, during the fall and winter of 2020-21 the dissident San Isidro Movement in Havana began publicly defying the rules by demonstrating for freedom of expression for artists. The government responded with intimidation and even arrests.

Another group, comprised of 300 Cubans of several professions and political persuasions in Cuba and abroad, recently signed an open letter to U.S. President Biden, asking him to end the economic blockade of Cuba. The letter acknowledges the United States is not solely responsible for the problems facing the country, and that the Cuban state is far from democratic. But it is only admitted privately by some of the signatories that Cuban government restrictions on freedom also prevent solving the island’s economic problems.

In February, in response to these expressions of dissent, the regime announced the expansion of regulations and security measures to prohibit protests in the Havana neighborhoods where Cuba’s powerful elite usually live and work, including state ministries and other government buildings, as well as areas where tourists shop.

Official history dates the birth of the Cuban Revolution from the triumphal entry of the guerrillas into Havana on January 1, 1959. But it was not until April 16, 1961 that Fidel Castro declared the nation was undertaking what he characterized as a socialist revolution, initiating the eradication of the exploitation of some people by others.

The daily life of Cuban workers has belied the proclaimed emancipatory objective of the revolution. It served as an ideological justification for the seizure and retention of power. Castro’s socialism was actually a simple Caribbean expression of Eastern European style state capitalism.

In reality, the regime has never tried to fulfill the promise of eradicating capitalist exploitation or suppressing class differences.

It expropriated and nationalized the means of production and consumption, making the State and its bureaucracy managers, keeping everyone else as employees and servants. Workers have been denied the right to organize in autonomous unions, to defend their class interests. Anarchists and others who tried to defend self-management of work places have been repressed.

Starting in 1964, the Soviet Union assisted the Cuban state through trade concessions, including purchasing sugar at a price higher than the world market. In 1989, the Soviet Union collapsed and its economic support ended. To cope with the economic difficulties this caused, at the beginning of the 1990s what was known as the Special Period was initiated.

The government invited foreign investment in tourism, free-trade zones, and joint-venture projects that produce goods and services most Cubans could not buy. They were barred from markets, hotels, hospitals and recreation centers that were only open to diplomats, tourists and Cubans who were able to obtain dollars through jobs catering to foreign visitors or from families abroad.

At the same time, the supply of basic ration products from the state-run supermarkets was diminished. The majority of the population continued to live under austere conditions, and for some, poverty was intensified. Many had to commit illegal acts to survive, such as workplace theft and engaging in prostitution (the jineteras) with tourists.

All this enabled the regime and the party to increase their authority over Cuban society. By legalizing some forms of private employment, the government was able to set the rules and demand tax payments. It intensified competitiveness while suppressing cooperative endeavors and solidarity. It also stymied attempts at making the society freer and more egalitarian.

The reforms begun in the 1990s, and increased since Fidel left leadership of the State to his brother Raul in 2006, have been concentrated in the economic sphere. The only changes made have been those needed to maintain the traditional relationship between the elite and society.

When Chávez became president of Venezuela at the turn of the 21st century, that country began providing economic assistance to the Cuban state. The Cuban authorities resumed primary reliance on centralized supervision and nationalized enterprises. Nevertheless, many Cubans remained economically deprived.

In 2006, Fidel’s brother Raul took over the presidency and restrictions on private enterprise began to be loosened again. From 2007 on, Cubans were allowed to stay in any hotel in their country, rent a vehicle or a tourist motorcycle and spend their vacation in a tourist establishment on the island (depending on their resources). The laws for selling real estate and cars were also loosened.

In 2011, 181 previously illegal private occupations were legalized. These included such jobs as self-employed taxi drivers and shoeshine services. Two years later, 201 more occupations were made legal. In addition, Cubans were allowed to legally leave the country for two years without losing the right of residence. The reforms of immigration laws in 2016 and 2018 enabled Cubans who had left the country illegally before 2013 to visit the island.

In 2019, Raul Castro retired from the presidency, and Miguel Mario Díaz-Canel Bermudez replaced him. During the subsequent year, several reforms were announced to address economic and health problems afflicting the country.

As part of the celebration of the 62nd anniversary of the so-called revolution, Díaz-Canel announced new economic regulations decided upon by the Communist Party, to take effect on January 1, 2021. These included fixing monetary exchange rates between the dollar and peso. The government will also permit more categories of self-employment to help people survive in the midst of the serious crisis. Nevertheless, a list of 124 forbidden occupations remains.

Díaz-Canel assured the population that permission to participate in the private sector will be on the basis of guaranteeing all Cubans equal opportunities, rights and social justice, by promoting interest and motivation for work. It remains a government managed process, not one involving equality and opportunities for self-managed choices.

State capitalism is giving way more and more to private capitalism. The much-vaunted reforms will result in reductions in government subsidies, such as income and rent assistance, free health care for people with low incomes and other support for poor people. This change from relying primarily on state capitalism to empowering private enterprise is justified as making the Cuban economy more efficient.

The reforms came in time for people to celebrate the New Year and the 62nd anniversary of the Revolution according to each one’s wallet (some in palaces, others in huts) as in any capitalist country.

Over the years, the Cuban rulers have continually rejected and repressed proposals and attempts from inside and outside revolutionary circles to democratize and influence the so-called Revolution towards truly emancipatory objectives. They have acted against such attempts with equal or greater zeal than they have against the right-wingers exiled in Miami, who would like to reinstall bourgeois democracy on the island.

Nothing indicates that a more democratic or liberatory outcome is on the horizon for Cuba very soon. Given this reality, during the regime’s time in power the majority of Cubans have sought ways to survive in a country where everything depends on the State. Dissenters have met with repression and large numbers of people have left the island. In these circumstances, it has not been possible to develop broad opposition capable of expressing real alternatives to the regime. Only a fragmented and polarized political spectrum currently exists. 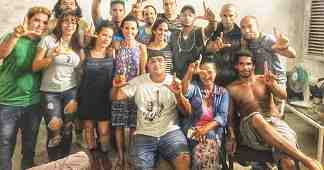 There are social explosions and there is much frustration and discontent, but different groups are responding to their own narrow issues with limited demands. As a result, emancipatory perspectives for the society as a whole have remained undeveloped.

Neither the San Isidro Movement nor the other initiatives question the government’s holding onto capitalism in one form or another. Hence, no matter how much media noise is made about such initiatives, it is not from them that emancipatory or even democratizing perspectives will emerge for the Cuban people.

Although ideologists of the status quo often say that capitalism supports democracy, in fact, there have been and are many examples of capitalism supporting dictatorships of all kinds. In the Cuban situation, the ongoing drift towards private capitalism is compatible with maintenance of the dictatorship of one-party government with the extension of the business economy to all sectors of economic activity (except the 124 prohibited ones). It is to be a gradual process managed by the same elite that has controlled the government and the party during the 62 years of the so-called Revolution.

Being aware of this does not prevent us from continuing to desire and advocate for a society where all public affairs are resolved through the self-organization of those of us who live, work, create and love, in Cuba and worldwide. As anarchists we look forward to the end of wage labor, imposed authority, the cult of personality, direct structural and symbolic violence, hyper-competitiveness, bureaucracy, decisions in the hands of an elite, concentration of wealth and unequal appropriation of knowledge.

This is what Cuban anarchists want and what all the world’s anarchists fight for.

[Translation from Spanish by FE staff.]