On the Poverty of Student Life

The Little Pamphlet that Started a Revolution

a review of
On the Poverty of Student Life, Considered in its Economic, Political, Psychological, Sexual, and Particularly Intellectual Aspects, And a Modest Proposal for its Remedy: Members of the Situationist International and Students from Strasbourg. Edited by Mehdi El Hajoui and Anna O’Meara. Common Notions, 2022 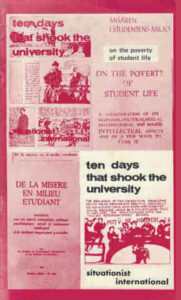 The Situationist International (SI) was founded in 1957 by a half-dozen European avant-garde artists. Recent historical events, chiefly workers uprisings in East Germany, Poland and Hungary, convinced them that a social revolution was possible. There had to be a way out of the polarization of Europe into a capitalist West and an allegedly Communist East.

So, the Situationists dedicated themselves to fomenting this revolution, which wouldn’t simply change the political order, but the way social life was organized, as well. They published a journal, created films and paintings, and organized exhibitions. They were, by and large, ignored.

Almost ten years later, in 1966, the SI suddenly became famous, both in Europe and the United States. What did the trick? The so-called Strasbourg Scandal, which, in a single phrase, summarizes both the contents of a remarkable pamphlet entitled On the Poverty of Student Life, Considered in its Economic, Political, Psychological, Sexual, and Particularly Intellectual Aspects, And a Modest Proposal for its Remedy and the circumstances of and responses to its publication in November 1966.

The scandal started when a handful of Situationist-influenced radical students at Strasbourg University got themselves elected to the student union. This gave them access to a fairly large amount of money. The students contacted the SI, which was based in Paris, and offered to help defray the group’s publishing costs.

The Situationists had a better idea: use that money to fund the publication of a new text, one relevant to the students’ own situation. Written by the Situationist Mustapha Khayati, that new text was On the Poverty of Student Life. Tens of thousands of beautiful copies were printed and distributed for free. When news broke that the funds for this scathing pamphlet had been diverted from the student union, a huge scandal ensued.

There’s a new book out on the subject. The core of it is its second section. In it, the editors, Mehdi El Hajoui and Anna O’Meara, reprint the French original and Ten Days that Shook the University, the pamphlet’s first translation into English, undertaken by two British Situationists, Donald Nicholson-Smith and T.J. Clark (1967). Section Two also offers a brand-new note on this translation by Nicholson-Smith (2021) and a reproduction of an early handwritten draft of the pamphlet’s first part.

Missing from this section are a large number of relevant documents. At the very least, an English translation of the pamphlet that is faithful to its original wording should have been provided. The 1967 translation, as Nicholson-Smith notes in a text written especially for this edition, is more an adaptation than a translation: “a close representation of the original must be sought elsewhere.”

Two are currently available: one by Lorraine Perlman’s Black and Red Books, and the other by Ken Knabb, editor and publisher of the Situationist International Anthology, first printed in 1981.

The first section of the book published by Common Notions, offers a series of brand-new texts that attempt to situate the pamphlet in its historical context: Anna O’Meara’s “Zengakuren: How a Japanese Student Union Influenced the SI,” explains why post-1970 reprints and translations of On the Poverty removed all references to the Zengakuren (undated); Mehdi El Hajoui’s interview with Khayati, who is very clear on the fact that “if one were to write a new version of On the Poverty of Student Life today, it definitely would not take students as its target” because “other actors […] have claimed their rightful place as potential objects of contempt: the universe of the so-called ‘counterculture, ‘of the ‘alternative,’ has become, after a lengthy detour, one of the dominant ideologies of our time” (interview conducted in 2021); and Allan Antliff’s alltoo-short “On the Poverty of Student Life: The Black & Red Edition,” which focuses on the efforts in the 1960s and ’70s by Fredy and Lorraine Perlman first in Kalamazoo; later in Detroit, to publicize and further the revolutionary project of the SI, including publishing the first American edition of Guy Debord’s Society of the Spectacle. All three of the texts in this first section of the new book are valuable contributions to current scholarship on the SI.

The third and final section, which takes up fully one-half (!) of the new book’s pages, is devoted to cataloging the hundred or so reprints of the pamphlet that have been published in over twenty languages since 1966. This part is, I’m sorry to say, a waste of valuable space.

Though the editors’ notes speak of a wide range of vivid colors that were employed on the covers of these reprints (blue, light blue, grey-blue, dark blue, green, light green, olive-green, yellow-green, yellow, salmon, mustard, orange, pink, pink-orange, red, maroon, fuchsia, beige, and mauve), and though Khayati himself says that, in 1963 and 1964, one of the things about the issues of Internationale situationniste that “really stood out to us” was “its stunning aluminum foil wrappers,” the reader of this book only sees reproductions in black and white and various shades of grey.

Note as well that the book’s cover is a single color, a sickly green, with the type appearing as knocked-out white, and that barely legible reproductions appear in several places. And, yet the back cover refers to the “beautiful reproductions” contained therein!

No doubt these reductions in quality were necessary due to limited funds being available. The PDF circulated by Common Notions employs all of these colors, which makes all the difference in the world. All told, it would have been better if this section had been limited to text only, thus freeing up room for all the texts that might have been included, but were not.

And so, what we have here is a stunted growth, one that unsuccessfully tries to be three things at once, when being just one would have been sufficient to make a truly excellent book.

Bill Brown lives in New York City. He has been the publisher of the Situationist-inspired fanzine Not Bored! since 1983.

A 2000 translation by Lorraine Perlman of On The Poverty of Student Life is available from Black and Red. In keeping with their anti-market ethos, its price is $1. It is on their website blackandred.org or can be ordered from us at FifthEstate.org. Use the Donate button. Add $2 for postage. Yes, crazy. The postage is twice the cost of the pamphlet.

There is also a translation by Berkeley-based writer, Ken Knabb. His situationist archive is now at the Beinecke Library at Yale University. The collection consists of thousands of situationist-related documents accumulated over a fifty-year period (books, journals, pamphlets, posters, leaflets, articles, correspondence, notes, drafts, audio and video recordings, etc.) Its contents are at bopsecrets.org/recent/yale-inventory.htm