Special to the Fifth Estate

Sixteen persons were arrested in a bust which resulted from a police complaint that a Panther loudspeaker was insulting the pigs. A number of guns were seized (and have not been released), including two double barreled shotguns, a.45 automatic, a .22 caliber rifle, an M-14, and assorted ammo.

As hundreds of enraged brothers milled in the street through the late afternoon, smashing windows and honky businessmen, only the efforts of Kathleen Cleaver, Bobby Seale and other Panthers prevented the community from exploding.

Monday afternoon the Panthers were broadcasting info about the May Day Free Huey rally from a soundtruck on Fillmore.

As Kathleen Cleaver remarked to this writer afterwards, “The record stores all up and down the Fillmore all use sound-trucks. There is amplified sound in the street every day.”

The difference—according to Sergeant Schaumieffel of the S.F.P.D. mod squad, is that the Panthers were crying “Off the pigs.”

Schaumleffel, scowling, drove to Northern station where he found no record of a permit issued to the Panthers for a loudspeaker.

The police department later told this writer that “There was no permit issued to anybody from the Black Panther Party—”At least,” the S.F.P.D. hastily added, “not in the name of the Black Panthers anyway.”

“They might have a permit in another name, we don’t know.”

But after a cursory check of the files revealed no permit the S.F.P.D. gave Herr Schaumleffel complete freedom to “use his own judgment in the matter,” as he later told the press.

In Schaumleffel’s eyes, “good judgment” in quieting a loudspeaker required 12 men with 150 stand-by reinforcements submachine-guns, M-16s, and a supply of tear gas bombs.

The contingent pulled up to Panther headquarters. Blacks up and down the street halted in their tracks—Bad Action here. Cleveland Brooks was standing outside with the mike. Twelve Panthers were inside the building taking care of business, including Don Cox and sister Belinda Brooks.

Up and down the Fillmore for blocks, almost every store window bears a poster of Huey, Eldridge, or Rap. These posters seemed to come alive Monday afternoon, as if Newton, Cleaver, and Brown were coolly observing how their brothers on the street would maintain.

Cox told the pigs they had no business in the building without a search warrant. They had none. Cox closed the door, leaving the fuzz outside.

The pigs put their steel-cleated boots to the door, kicking out the jambs.

Wood shattered, and from each side of the shattered passageway, heels ground to the floor, stood their turf with the wide-open eyes of double-barreled shotguns leering coldly at a dozen pigs who held M-16s leveled at their waists.

The Black Revolution came within hot-breath distance of pumping it out with White Imperialism, Dodge City style, man for man and gun for gun.

But at this point, sister Belinda related to this writer, Cox yelled for the Panthers to take cover.

The pigs high-tailed it behind their squad cars. The pigs had come to arrest one person, Cleveland Brooks (note: not to “investigate further” but to arrest).

But from behind their cars they called for all the Panthers to come out with their hands up and their clothes off! (We assume the officer had a permit to use a loudspeaker on the Fillmore that day.)

But—as Cox related at the May Day rally the following Thursday—”Panthers don’t take orders from pigs.” The Black Panthers stood firm. Cox hurriedly called national headquarters, and was told by the officer of the day to avoid a shoot-out.

Panther attorney Charles Garry was to charge later that the whole incident was staged to “poison the atmosphere at the Huey Newton hearing Thursday.”

The pigs then shot, not one, but eight tear gas canisters into the office. The Panthers kept cool, and put down their weapons.

“Several sisters were choked up,” Belinda told this writer, “and the brothers were trying to help them, and the pigs fired several shots at Don. Don had to drop this sister who was fainting.”

The Panthers were taken to the Northern station, where most were released after an hour and a half. Assault charges were filed against Don Cox.

“We came back to the street,” Belinda said, “and hundreds of brothers were about to go crazy. There were Panthers on the street telling people to go home Kathleen Cleaver was there, and so was Bobby Seale. We helped them.”

Mayor Alioto charged in the straight press Tuesday that “the young men who did react so quickly and so well were probably mistaken for Panthers.” He went on to say he was adding 150 pigs to the street the following week.

“Pig Alioto wasn’t there, he’s lying.” said Belinda in response to the Mayor’s allegation that the Panthers incited to riot, rather than help cool the street. Even the straight press contradicted the Mayor.

The San Francisco Chronicle reported that “Black Panthers were seen trying to persuade the angry Blacks to calm down and in one or more incidents rescued whites who were being beaten.”

Panther attorney Charles Garry commented Tuesday that “the Black Panthers are entitled to have guns in their homes and offices, by law, for the protection of themselves and their children. They do not carry weapons on the street and if they do, it is grounds for expulsion.”

Referring to their efforts to prevent an insurrection Monday—as well as to other Panther social programs (like giving free breakfast to hungry kids of every color in the morning)—Gary said that “the mayor disregards the fact that the work the Panthers are doing today prevents the kind of violence he is talking about.”

Bobby Seale commented to this writer that “instead of giving the Black Panthers credit for having cleaned house—we expelled at least 100 members in the last 45 days—he’s using us for his political gain.”

Seale was referring to those now known as Panther Renegades, who were expelled for being Too Fuckin Bad: for offing people, staging unauthorized holdups, etc.

“I’m going to talk like Eldridge used to run it,” Seale went on, “Mayor Alioto is a crook, a liar, a Mafioso who is bootlickin’ for the Irish and the Anglo-Saxons—that’s Eldridge, I dig that.”

The nation is moving quickly toward Reagan tactics. This is being written hours after the May Day Free Huey rally, in which thousands of Black Panthers, White Panthers, and Renegades of every color marched around the Federal building while Huey’s hearing was in process inside, chanting “Free Huey, Off the Pig, Free Huey, Smash the State.”

As we turned the corner in our march around the block-square edifice, the headlines in the paper rack next to a couple TACs warned: SMITH ACT MAY BE USED ON PANTHERS.

The Smith Act. Shades of the McCarthy era…shades of…

…of the Nixon era!

Next time, it may be different: they can’t frighten us with their Bad Mouthing anymore.

They can’t put all of us in their jails anymore. Black Panthers, White Panthers, Renegades of every color, all getting ready to put it on the line. 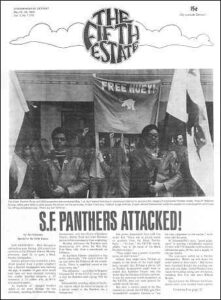 The Black Panther Party and 350 supporters demonstrated May 1 at the Federal Building in downtown Detroit to demand the release of imprisoned Panther leader, Huey P. Newton. Similar rallies were held in cities across the nation on the same day. In San Francisco, Federal Judge Alfonso Zirpoli denied Newton bail while he appeals his manslaughter conviction for offing an Oakland cop. Photo by Carl Schurer.