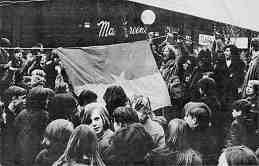 “We are all outlaws in the eyes of America.”
—Jefferson Airplane

“The chickens are going to come home to roost.”
—Malcolm X

Years of police harassment of young people at Northland Shopping Center finally came home on Saturday, December 20, as hundreds of Detroit and suburban youths clashed with police for several hours in the center.

This was the third successive Saturday that the police have used violence against the young people who are refusing to bend to the anti-youth suburban pigs. They come to the northwest shopping center to meet friends, shop, and congregate.

In response to police attempts to stop these activities by means of harassment and bullshit arrests, the youths have decided to fight back and are learning that oppression is not limited by class, but is used against anyone who dares step out of line.

The spontaneous action that occurred was defined by a series of lightning events that left 15 people arrested under charges ranging from loitering to inciting to riot.

Several hundred people were gathered on the North Mall of the center on Saturday afternoon milling around, talking with friends, feeling a strength in their numbers and generally waiting to see what was going to happen. Plain clothes pigs circulated in heavy numbers in the crowd and shot pictures of the group from roof tops.

The Northland Keystone Kops, who were the original ones to harass the kids at Northland, became the victims of snowballs as they rushed around the area attempting to douse the fires that were started in trash barrels.

The mood of the crowd was a cheerful spirited unity. One freek was distributing ripped out pages of Abbie Hoffman’s book Revolution for the Hell of It and this seemed to typify the spirit of most.

The local pigs began to shift nervously as a smoke grenade exploded in the doorway of Hudson’s. This created a small panic as many believed that the pigs had gone in for a tear gas thing.

No violence had broken out, but events began to quicken as an impromptu rally on the mall began to build. A Viet Cong flag and a banner saying “Avenge Fred Hampton,” the murdered leader of the Illinois Black Panther Party, were raised between Hudson’s and Kresge’s.

The crowd began chanting various slogans and one brother gave a speech. The speech talked about the rally as a response by the kids to the entire Amerikan system that is oppressing them. The speaker further drew a connection between mental alienation of suburban youth and the struggles of Amerika’s black colony and the Vietnamese people.

He went on to say that their struggles should be models for our own activities.

Suddenly, a suburban shopper became a local Captain America. After viewing the rally for several minutes, he lunged into the middle of the crowd and grabbed the Viet Cong banner. Then the trouble began to break out. As several people tried to stop his attack and retrieve the flag they found themselves punching it out with the zealous patriot and his wiry middle-aged buddy.

Plainclothes pigs leaped at this excuse that they had been waiting for and moved in to make arrests. The pigs began grabbing anyone close by and dragging them away. Several members of the crowd wrestled with the pigs and managed to escape.

The flag-grabber, Alexander Agbay, a former Business Administration instructor at Wayne State University was not arrested. This flag grabbing pig with his vigilante mentality, incited the defensive actions by the youths as he played the part of provocateur.

These events heightened the degree of militancy and the tension and anger began to rise. Someone smashed in Hudson’s windows as the pigs produced their tactical reserve.

A hundred members of the Oakland County Tactical Mobile Unit, made up of police from over eight suburban communities including Royal Oak, Ferndale, Troy, Southfield, Berkely, Birmingham, Beverly Hills and Bloomfield Hills, converged on the scene.

They had been waiting underground all day hoping for a chance to show off their new equipment, demonstrate their well practiced riot tactics and push around some kids. They set up double rank skirmish lines at each end of the North Mall, cleared the mall and cordoned off the entire area.

The shopping center began to look like no man’s land under occupation by military forces. Merry Christmas from Northland and J.L. Hudson’s.

Groups of bewildered shoppers and young people confronted the police lines as they would periodically push the crowds back. The plainclothes pigs played a major role as they went circulating through the crowd and making arrests.

One cop was defending the police position to a group of youths that had gathered and were talking. He stated, “This is America. You are free to be here and to assemble because we fought in wars to defend you.”

While he was rapping this lie other pigs were dragging young people away on charges of unlawfully loitering, disorderly persons and inciting to riot and a Police Captain was announcing over a bull horn that the crowd constituted “an unlawful assembly” and ordered them to disperse.

As one skirmish line advanced without provocation, some kids panicked and began to run, stumbling over each other. A more level headed member of the group, seeing the danger in this, shouted, “Walk, don’t run, walk.” Two plainclothes pigs immediately grabbed him and hustled him off to jail. His name is Kenny Darr and he was charged with inciting to riot and his bond was set for $1,000.

Fourteen of the 15 arrested were arraigned before Judge James Clarkson in Southfield Municipal Court later Saturday night. The judge stated when questioned about a particular bond that “the eyes of the community are upon to tonight and I must respond.” Those eyes that the judge was referring to are those of the J.L. Hudson Company and the other members of the Southfield business community who are upset about the recent disturbances that are causing monetary damage during the Great Capitalist Christmas Ruse.

Four juveniles were released to the custody of their parents, and one local resident, Mark Perry, who lives above the Fifth Estate, was ticketed for being a disorderly person when he was caught putting a “Free John Sinclair” sticker on a Southfield pig car.

The police forces that assembled to repress young people at Northland have obviously been a radicalizing force to a greater extent than has been the material conditions of their actual lives. The police tactics employed and their mentality have given many suburban kids their first dose of the Garrison State in action.

They have been made aware that they are not really free—that freedom in Amerika is a token word that has meaning only as long as they continue to live their lives by the rules of the pig culture. The youths were further given a graphic illustration that police forces in this country are employed solely for the purpose of protection of ruling class property rights.

The J.L. Hudson Company runs Northland, J.L. Hudson’s runs Southfield and the pigs that responded to the non-money spending youth gathering at Northland by busting and harassing them are also owned by J.L. Hudson’s.

The terms of life in suburban Detroit, laid down by the anti-youth Northland business interests are now clear. What is also clear is that young people are rejecting those terms and are willing to struggle for their own definitions.

A lot of money and help is going to be needed to get the arrested brothers and sister out of the bullshit charges they are facing. If you want to assist in their defense or IF YOU WERE A WITNESS TO ANY OF THE EVENTS OR ARRESTS call 548-5278 or 5410583