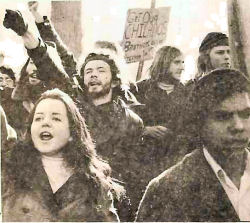 The second issue of the Youth News Service was sent out on February 25. The news packet was sent to some 43 high school and youth collectives who are putting out underground newspapers or are thinking of starting them.

The Fifth Estate is turning over a back office to the Youth News Coalition to use as a general Office.

On March 17, there will be a benefit at the Grande Ballroom to help pay for the Gestetner printing equipment that was bought for the Youth News Coalition. More information is contained on the back page of this issue, and people should check it out and be there.

There is a meeting of the YNC on Saturday, March 6, at the Fifth Estate office at noon. All people putting out papers or wanting to find out information about it should try to be there. Plans will be made for a benefit at the Forest Theater Coffee House to raise bread for supplies.

On Friday, February 19, the commune on Academy Street was busted. Some of the people who work at Center House live there. A guy who had been hanging around the commune for several months turned out to be a narc who brought the cops to the house that night. His description is as follows:

Flash! March 1st: 75% of the Mumford High School student body held a sit-in in support of more student rights and competent teachers. 100 students are planning to hold the school overnight or until the schoolboard meets the 11 demands. Check out the next issue for more details.

Many women’s liberation groups are forming in high schools across the city.

A group of women at Clarenceville High School in Livonia are in the process of forming a Women’s Liberation group—thus far they have held two informal meetings to plan future activities.

The Women’s Liberation group at North Farmington High School holds meetings once a week to discuss the national, social and political aspects of the movement.

Denby’s policy forbids the forming of any “radical” organization. But a teach-in was held recently with speakers from Michigan’s Women’s Liberation Coalition, Open City and the Fifth Estate.

The pigs deliberately committed a hit and run accident and then arrested the victim!

The victim was George Adams, a Young Pride. He and a couple of friends saw a community person being arrested and walked nearby to check things out, There was a woman with the man being taken in, and the boys advised her to get badge numbers. George was standing near the right front side of the car. The cop hit him and spun him around and George smashed against the car again. He was knocked unconscious and the cop sped away. George was arrested at the hospital later while receiving aid for his injury.

“Are you fed up with blacks uprising at Ferndale Hi?” That’s the first line of a racist, inflammatory leaflet put out by the Force for the Preservation of White Supremacy. They began to circulate it after there had been several demonstrations at the school in support of Mrs. Gloria Pitts, a black history teacher who got fired because of her radical views.

The leaflet concluded with the statement that on February 19 at FHS “We will commence to kick ‘niggers’ asses 4th hour.” On that day there was a confrontation in front of the school, but the white racists didn’t get all the support they expected. There were some fights and the “Force” came out on the losing end. The whole set was videotaped by the school administration. About 11 students got suspended immediately. During the next week more students, both black and white, got suspended as they were identified from the videotape.

The week following the confrontation, the school suspended the lunch program in order to minimize the opportunities for the open clashes between groups of students. But, according to one Ferndale student, tension is still high and when the regular schedule is resumed, there will probably be more incidents.

Support for the return of Mrs. Pitts continues to grow. Her dismissal remains as an obstacle to harmony at Ferndale.

In a high school situation, when all sorts of bogus pressures are coming down on you from everywhere, it’s a good feeling to find that the words of the women’s movement are hitting the high schools and hitting them rather hard.

If you are a young woman, in the 3 or 4 years you’re in high school you are continually being pressured to be a feminine, super cunt with a laquering of politeness and a fear of being yourself (sometimes called self-denial or femininity). If you are a young man, you are told to prove yourself, to be super stud, to cultivate your ego, to run your life and help run everyone elses. With all these pressures, young women are beginning to think very seriously about the Liberation movement. Because peoples’ consciousness is being raised of their repressive nature, all high schools are breeding revolutionaries.

There are still the pressures among both sexes to attach yourself to someone so you can say you’re their boyfriend or girlfriend These pressures are very hard to get rid of because from earliest childhood we have all been told that to prove that you’re a complete woman or man, you have to have another woman or man as your personal property. We have also been taught not to have lasting, sincere relationships with members of your own sex.

Another thing I’ve found is that there are many so-called revolutionary (really pseudo-revolutionary) men who are against the war or for cultural revolution but who are not dealing at all with their sexism. Some will even deny vehemently that they are sexist, while intently watching your breasts instead of looking you in the eye.

Since women are the most important thing in Women’s Liberation, it’s not that urgent to tell Johnny he’s a sexist but to realize that his girlfriend Jane is your sister and you owe it to her to awaken her to the fact that Johnny is a sexist and she doesn’t have to take that kind of shit anymore!

All power to the sisters who love each other and fight the real oppressor!

The sisters recently got over 500 signatures on a petition demanding all sorts of rights for women and are now awaiting approval from the student council and the principal, on their demands.

On Wednesday, February 17, The United Front, the Brown Berets and STP sponsored a demonstration in downtown Kalamazoo in protest over conditions at the County Jail as well as the U.S. invasion of Laos. Even though the sponsors stressed that the demonstration should be peaceful, a few rocks were thrown, a flag was burned and a cop was hurt by a piece of concrete.

The police moved in and, according to one observer, “failed to make any announcement to the crowd that they should move. Instead, they broke off into fives and sixes and chased individual participants, in particular the Brown Berets.” Many people were beaten with nightsticks. The whole scene was reminiscent of the 1968 Chicago convention.

At least six people were arrested immediately on charges of resisting an officer or loitering. But the next day, Circuit Court Judge Raymond Fox announced that he was redirecting the citizens grand jury, which had been drawn to investigate drug trafficking in Kalamazoo County, to now investigate the events of the demonstration and bring indictments against “those persons against whom evidence can be presented.”

Many people in Kalamazoo feel that the grand jury will become a witchhunt for people who the police and Judge Fox feel are “dangerous.” In other words, they feel that political repression is going to get much heavier. There’ll be more on this in the next issue of the Fifth Estate.