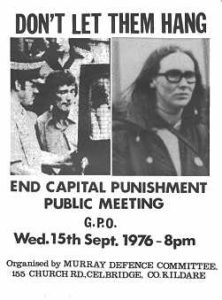 As Noel and Marie Murray approached their Dublin home after a morning stroll they were confronted by a garda (an Irish cop), wielding a sub-machine gun.

“You’re dead, Murray,” he screamed. A few months later, a justice of the Special Criminal Court concluded a political show trial by confirming the garda’s sentence.

According to the court, the story of the Murrays started on September 11, 1975, when the Allied Irish Bank was robbed by armed raiders. As the raiders drove off in their car, an off-duty policeman spotted them and gave chase in his car. He was not fired upon and managed to follow the raiders to nearby St. Annes Park, where he was shot in the head.

It is not known exactly what happened in the park, but the forensic reports show that garda Reynolds was probably shot in the course of a scuffle at close quarters. The eye-witness accounts of the bank clerks and passers-by varied considerably and the only clue the gardai had was a contact lens case found in the bandits’ car.

The fact that the gardai had nothing to go on, however, did not deter them. They saw their chance to nail the Murrays. The couple were known as anarchists and Noel had previously jumped bail when charged with the possession of arms and explosives in connection with an attack on the Spanish Institute in Dublin.

The gardai were increasingly worried about the activities of the Dublin anarchists and suspected that a section of them were responsible for a series of bank raids and terrorist attacks on Spanish state offices in Ireland.

The police had successfully thwarted the establishment of a new anarchist newspaper and harassment is generally being administered across the entire spectrum of the Left.

In short, repression is increasingly the rule in Eire and it came as no surprise to Dubliners when the death of garda Reynolds was followed by a series of raids and round-ups. Two hundred raids were conducted by police on known activists and even friends and relatives were detained.

The “interrogations” of these people consisted of beatings, psychological intimidation, and “Longkesh” style techniques. One citizen who “helped the police with their enquiries” sustained several bruised ribs; another was hospitalized for two weeks. The following month, October 1975, twenty armed police surrounded the Murrays’ house and awaited their return.

At 10:30 the same morning, Ronan Stenson was dragged from his bed and manhandled into a police car where he was told he was being taken into the mountains to be shot. The sole reason for picking up Ronan seems to be his political work with the Prisoners Rights Organization.

Ronan was beaten with a hammer and whipped with a knotted nylon rope, as well as the “normal” -methods of fist beatings, humiliation and intimidation.

When some sort of statement had been beaten out of him, he was taken to Curragh Military Prison where an army doctor examined him and found extensive bruises on various parts of his body.

The psychological effect of the beatings on Ronan was such that he verged on a mental breakdown, and although he is charged with the Murrays, the authorities decided he was not in a fit state to participate in his trial.

Noel and Marie Murray were interrogated for 17 1/2 hours before they “broke.” In the course of the process, Marie was put in the cell next to Noel where she could hear him being beaten and having his head forced into the toilet. The police told her that he would be killed and she had every reason to believe them and signed a “confession” to save his life. It is reported, however, that the beating still continued.

The Murrays and Stenson were charged and sent before the Special Criminal Court, set up in 1939 to hear cases involving paramilitary organizations, specifically the IRA. It is the ultimate legal weapon of the State and operates without a jury, but instead-is presided over by a three-man panel of judges who are appointed for their political loyalties and must have seven years service in the legal profession or the Army.

Defendants in the Special court are required to prove their innocence to the court rather than the other way around and after a charge of IRA membership, conviction is a foregone conclusion.

Although the three defendants never had any connection with the illegal Irish underground organization, the Eire government decided to use this as a show case to demonstrate its toughening posture toward terrorism. The entire prosecution case rested on the “confessions” since other evidence and the statements of prosecution witnesses were vague and contradictory.

The Chief Justice, Pringle, stated that there was no evidence to suggest that the statements were anything but voluntary, even though the Murrays had since repudiated them. The Murrays refused to cooperate in this judicial farce and after the tribunal’s refusal to respond to their requests for a fair re-trial, ceased to cooperate with their counsel. So for a large part of the trial, they were unrepresented.

The trial went along its predestined course and after six weeks, Noel and Marie were found guilty and sentenced to be hanged. The two have appealed their conviction and sentence to the Irish Appeals Court, but predictably it was turned down. There is a further appeal planned to the Supreme Court on November 1st and the date of the execution has been deferred until after this last appeal.

The chances of winning a reversal are remote and the fate of the Murrays rests on political opposition to intended murder by the Irish state.

While defense efforts on behalf of Marie and Noel Murray are being organized around the world, time is rapidly running out with a November execution date planned for the anarchist couple charged with murder of an Irish policeman.

There have been numerous marches and demonstrations in the British Isles with Scottish, British and Irish trade union groups protesting the Murrays’ death sentences. Here in the U.S. efforts have begun slowly mostly concentrating on spreading information about the case. Contact: Free the Murrays Committee, c/o Solidarity Collective, RWC, U. 10, Room 1001, Bristol, R.I. 02809; IWW Defense Local 2, Box 306, Station E, Toronto 4, Ontario. We had an address for a San Francisco group too, but have lost it—could it please be sent to us again?

Locally, the Fifth Estate collective discussed what actions to take beyond publicity, but ran into a brick wall. Beside the fact that there are absolutely no Irish government or travel offices in the city, we felt that a small demonstration (we figured we’d get the most 20 people tops) would be absolutely ineffectual. Do people in other cities have any suggestions? How about a national day-of marches or other activities? Let us know—the Murrays are going to die at the hands of the State unless we can move effectually.