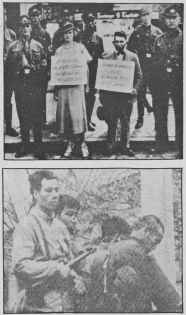 George Orwell’s 1984, in which he potently describes a totalitarian society of the future, has been used by both capitalists and communists in describing each other’s society. The saddest thing of all is that they’re both right.

The photos on this page show the military forces of Germany (1936) and China (1977) practicing the art of criticism/self-criticism in attempts to clear the nation state of unwanted elements.

The two Germans were accused of violating Nazi doctrine and were paraded through the streets of Hamburg with placards reading:

At this place I am the greatest of swine: I take jews and make them mine! and

As a Jewish boy I always take German girls up to my room!

Likewise, the Chinese, in the lower photograph, had also been accused of violating the latest doctrine from Peking.

Wearing placards that proclaim them as “criminal hooligans,” they were placed in trucks by members of the Peoples Liberation Army and criticised in front of crowds in Wuhan.

Writing in the Sept./Oct. 1976 issue of Minus 8 (8 years till 1984—now only 7), a monthly publication that comes out of Hong Kong, Sau Choi, an ex-Red Guard who fled China in 1973, tells of how two Chinese students were criticised during the Cultural Revolution:

“There were two students who were from intellectual families. Both liked Western classical literature. They often talked to each other. As their thinking was more open, they were criticised by their classmates. They became the target of attack in a social struggle, and were paraded along the streets with black placards hung around their necks. The crowd was gleeful when the two were made to demonstrate their intimacy.”

The only difference, or so the Chinese Communist Party would like us to believe, is that in China all this is done in the name of the working class and for socialism.

Only the names have been changed to protect the guilty.

Both photographs represent a social order in a state of decay, when the institutions that police society, keeping us passive observers of our own demise, begin to lose the toe-hold that keeps them in power and necessitate the inevitable use of force.

Using history to judge the movements of governments, it’s quite apparent that whether rulers call themselves Revolutionary Communists or Fascists, when their authority begins to lose its grip over our everyday life, the masks of democracy, freedom, liberalism, socialism and communism are all flung aside to reveal the true nature of the beast. From the U.S. to Portugal and China, the rules are the same; go directly to jail. Do not pass go and do not collect $200.