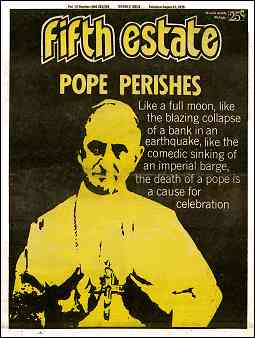 Like a full moon, like the blazing collapse of a bank in an earthquake, like the comedic sinking of an imperial barge, the death of a pope, and the giddy and liberatory revelation that we are now—if only momentarily—living during a time when there is no pope, is a cause for celebration. Firecrackers, stink-bombs, and rockets should be fired in every aisle and nave, on the steps of every church from Rome to St. Clair Shores! Celebrate! The pope is dead!

There is no pope!

The pope, as any devout catholic will agree, is not simply some shrivelled little rodent in a kimono, but a symbol: the symbol of his god, and the chief representative of that bloated and sybaritic camarilla which surrounds him. Since this god is himself only the reflection of human self-alienation, hence the symbol of repression, the death of a pope—the symbol of a symbol—is materially nearly meaningless. One slug easily replaces another, and business goes on as usual.

But if the pope may at least be a symbol, then his death is mythopoetically a peal of blasphemous thunder, the thievery of coyotes, the unleashing of the uncontrollables.

Spit the host upon the ground and stamp upon it! Piss in the holy water fonts! Oh adventurers, seeders of the profane, make mad love upon the altars! Celebrate! A pope has died! There is no pope!