Would America be better off without Chrysler?

It's a fair question

You’ve heard it from the pundits, the malcontents, the radicals, even the competition. 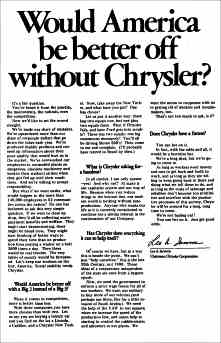 We’ve made our share of mistakes. We’ve squandered more than our share of corporate dollars that go down the tubes each year. We’ve produced shabby products and covered up information about their poor quality that would hurt us in the market. We’ve overworked our employees in outmoded plants on dangerous, obsolete machinery and broken their walkout strikes when they got fed up with their conditions. And we’re willing to accept responsibility.

But what if we went under, what would happen to the more than 140,000 employees in 52 communities across the nation? No one has bothered to ask this very simple question. If we were to close up shop, they’d all be collecting unemployment benefits and welfare. They might start demonstrating; there might be bread riots. They might start thinking of better ways to spend their time than on production lines putting a washer on a bolt 3600 times a day. Then there would be real trouble. The very fabric of society would be threatened. Let’s keep our workers on the line, America. Social stability needs Chrysler.

Would America be better off with a Big 2 instead of a Big 3?

When it comes to competition, more is better than less.

With three companies you have more choices than with two. Let us say you are buying a luxury car and you find on the lot a Lincoln, a Cadillac, and a Chrysler New Yorker. Now, take away the New Yorker, and what have you got? One less choice!

Let us put it another way: three less two equals one, but one plus two equals three. What if Chrysler fails, and later Ford gets into trouble? Three less two equals: one big communist monopoly! You’ll all be driving Slotne 600’s! Then come to me and complain. (I’ll probably have retired to Brazil by then.)

What is Chrysler asking for—a handout?

In all candor, I can only answer —yes! And why not? At stake is our capitalist system and our way of life. Because when you reduce things to the bottom line, our modern world is nothing without auto production. Anyone who wants our life as it is currently constituted to continue has a similar interest in the continuation of our Company.

Has Chrysler done everything it can to help itself?

Of course we have, but in a way this is beside the point. We can’t just “help ourselves;” this is the late 20th Century, not 1880. Those ideas of a corporation independent of the state are ones from a bygone epoch.

Now, we need the government to enforce a strict wage freeze for all of our workers. We want our military to buy more of our vehicles (and perhaps use them, like for a little invasion of Saudi Arabia). We need the help of the UAW to not squawk when we increase the speed of the production line, and union help in starting to control the rabble-rousers and saboteurs in our plants. We want the union to cooperate with us in getting rid of slackers and troublemakers, too.

That’s not too much to ask, is it?

Does Chrysler have a future?

You can bet on it.

In fact, with the odds and all, it would be a lucrative bet.

We’re a long shot, but we’re going to come in.

As long as workers need money and cars to get back and forth to work, and as long as they are willing to keep going back in there and doing what we tell them to do, and as long as the costs of sabotage and rebellion don’t become too prohibitive and interfere with the productive processes of this society, Chrysler will be around for a long, long time to come.

We’re not bailing out!

You can bet on it. Just get good odds.