Aversion and the Dynamo 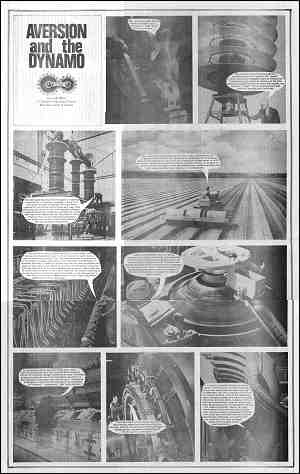 1. Description: machine parts in the foreground, nude man in the background facing away from the viewer; balloon above him says:

Well, everything gets done so quickly and easily, but… Somehow, I never quite feel at home here…

2. Description: a man in a business suit next to a large piece of equipment; balloon above him says:

Many claims of futurist technology are centered around the “ease” or the “speed” in which people and messages might be transported. In abandoning the system of capital, and the time pressures imposed by working within that system, the quest for “instant” communications and rapid travel will become nearly pointless.

3. Description: assemblage of large industrial equipment; a man is shown making adjustments and the balloon to his left says:

Why be concerned about the time spent in reaching a destination, or relaying a message, if there is no time clock to punch on Monday morning? More importantly, why bother with minutes when each stop along your journey favors you with hospitable people in villages of surprising, indigenous architecture, varied local foods and crafted costume? Why follow a travel schedule when you are welcomed everywhere and always feel at home? It is all the difference between adventure and tourism.

4. Description: a man driving a tractor in a very large cultivated field; the balloon above him says:

More and more tasks demanding of human energy and exertion are relegated to the machine. As vital labour is increasingly left to switches, buttons and flashing circuits, humanity is robbed of its own power to fulfill its primary needs. Humans will continue to atrophy in leisure, or to work at useless activity: running in neatly delineated circles, pumping and grunting with shiny equipment, and toasting in tanning booths.

5. Description: a woman tending a large machine; the balloon above her says:

The argument that the implementation of technology is the necessary and desirable route to the elimination of work rests on two fallacious assumptions: first, that because labour in this society is intolerable, all labour taking place in all societies is by definition intolerable; secondly, it takes for granted that the only way to alleviate the agony of this labour is to reduce its quantity. Assuming that it could actually be reduced at all through increased mechanization, using machines—to make machines which in turn make machines, the workers manufacturing such productive machines would have made no real improvement in their lives. A qualitative transformation not a simple quantitative readjustment, must take place.

6. Description: photo collage of machine parts; the balloon above says:

Crafts and aesthetics, instead of being integrated with lively practicalities and necessities, would become merely a decorative applique on the mundane fabric of automated life. Those few who become especially skilled in the arts would, once again be relegated to the—artist” position: practicing the specialized production of clever knick-knacks for the home of the person who excels in soldering circuit-boards.

7. Description: a woman examining objects in a large bin; balloon above her says:

For while automation may minimize labour hours, even the diminished work that it would demand would still be the miserable drudgery which takes place in all mass- production assembly work. As long as the opposition remains between unbearable work and “leisure,” the activity undertaken in that free time will assume the character of “hobbies,” “amusement,” and “entertainment.”

8. Description: a man tending a large machine; balloon below him says:

This would seem somewhat less exciting than a society where everyone is an artist, and everyone, whether throwing pots, building bridges, or taking harvest, expresses a creative love of life through his or her labour.

9. Description: pipes and other equipment looming over a woman who is in the lower part of the picture; balloon above her says:

It is not as if genuine community would need a “techno-police” to seize the project of a curious eleven-year-old experimenting in his basement. But with a change in the entirety of social relations, most of the technology taken for granted today will seem, at the least, ridiculous; and more likely, insidious. Technics has nearly always been a part of human existence. But at some point it expanded to become the measure of all life. Surely, in a new world we will rediscover that point, and develop tools and energy unimaginably different from those we invent and utilize in a capital-based society. Moreover, our technics will not comprise more than one single aspect of the totality of our creative activities.