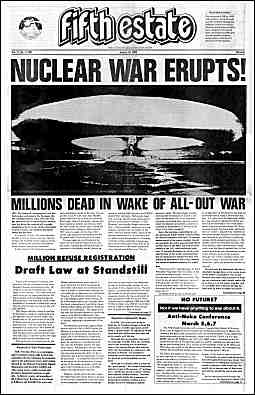 UPI—The dream of “containment” of a limited nuclear exchange to the European theater collapsed utterly today when the Reagan administration’s demonstration air-burst over the Baltic Sea touched off a rapidly-escalating series of events which culminated in all-out nuclear war between the Soviet Union and the West.

In a matter of hours, the most devastating war in human history was over, leaving at least one hundred million dead and effectively rendering the northern hemisphere of the planet a radioactive wasteland.

In the course of the three-hour exchange every population center in the U.S., Europe and the U.S.S.R. with more than 50,000 people was struck by at least one warhead. Most major cities (in particular national capitals), industrial centers and military facilities were struck by several, each raining the explosive force of several million tons of TNT onto its target. At this hour, fire storms rage across the hemisphere and five thousand years of civilization lie in ruins.

The war began as a confrontation between the U.S. and the Soviet Union over the latter’s increasingly bellicose threats to intervene in the bloody border dispute between its satellite East Germany and NATO-aligned West Germany. Refusing to heed U.S. warnings, Soviet troops continued to perform provocative “exercises”, in East Germany, spurring the Reagan administration’s “demonstration” explosion of a one megaton warhead over the waters of the Baltic. Nervous Soviet leaders, aware of the recently developed U.S. counterforce policy which posits the possibility of winning a limited nuclear exchange if Soviet weapons can be destroyed in their silos by an undetected first strike attack, placed the entire Soviet nuclear force on “fire on warning” status. This hair-trigger arrangement turned the decision to launch a possible counterattack over to an elaborate, computer-controlled early warning system which the Soviets had recently installed in response to accelerated U.S. efforts to develop a first strike capability.

Early this morning, responding to a radar warning of missile attack from the West, the Soviet computers, with only 17 minutes before arrival of the enemy missiles, launched essentially the entire ground-based Soviet nuclear force at the West. Stunned decision makers in the U.S., now confronted with only 17 minutes themselves in which to decide the fate of the world, concluded they had no choice but to launch lest their own missiles be destroyed in their silos, robbing the nation of adequate capacity for retaliation.

“The irony of it,” said Secretary of State Alexander Haig later from the safety of the airborne command center “Phoenix,” “is that we didn’t launch that first attack. This is not to say we weren’t going to, but as of that particular moment, no decision to launch had been made. The whole damn thing was set off by a goddamn Soviet computer error!”

Computer error or not, it would seem no exaggeration at this point to say that, as unprecedented as today’s destruction has been, it is really only the beginning. Already, huge clouds of radioactive fallout are carrying the devastation into those areas which somehow avoided direct hits. Soon, uncontaminated food and water will be all but non-existent, despoiled by radiation or the uncontrollable spread of contagious disease fostered by the millions of decaying corpses which escaped vaporization in the attacks. Since most medical facilities, like most doctors, were concentrated in large cities, even the idea of medical help for the injured and dying, who themselves number in the millions, is out of the question (though even if every medical facility had remained intact it would have made little difference, given the awesome numbers of injured).

Beyond even this devastation lies the incalculable damage done to the ozone layers of the planet’s atmosphere. The crucial function that these layers perform in filtering out ultra-violet light literally makes life as we know it on this planet possible, and” it is probable that sufficient damage has been done to them to render the planet