A happy new year thank-you to all of you who responded so quickly to our request in the last issue to please renew your subscriptions promptly. Thank you also for all the very generous donations and requests for papers to distribute to friends—we love to see those piles of papers disappear. Remember that we always need people and places to distribute the FE; we’ll send you papers on a consignment basis and you pay only for those you sell and keep half of the proceeds for yourself. If you wish to give the papers away free, send us the postage and we’ll send you a corresponding amount of FE’s. 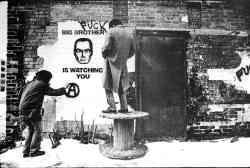 Do continue to renew your subscriptions quickly to save us the postage for sending you reminders; and if you’ve forgotten and find you’ve missed the next issue, please write us and give us your current address information (don’t forget your zip code please) and we’ll get you back on our list again.

A special thanks too for all the letters and notes from readers, especially those from other countries which help keep us in touch with all of you out there.

As it turns out, we were unable to meet our self-imposed end of the year deadline and are issuing this edition at the end of January. It is dated with last year’s volume number to keep things straight. It will only confuse archivists and librarians.

Our interim Newsletter has been receiving good reviews. If you’ve never seen it, it’s a bit of FE news, the latest arrivals in the book store and reprints of releases, leaflets, posters, etc. that people have sent us. If you want something included, be sure to send us a single copy which we will reproduce. The Newsletter goes out with book orders, some correspondence and is available at our office. If you want a copy, send a SASE with $.37 postage.

When a navy pilot from a Detroit suburb was shot down and killed during an air strike against Syrian positions in the mountains east of Beirut, his father gained national notoriety by lambasting critics of U.S. intervention in Lebanon in an interview on national television. Walter Lange, puffed up with pride and looking almost gleeful that his son’s death could buy him air time, scathed several politicians who had just finished criticizing the role of U.S. “peace-keeping” forces in Lebanon, rebuking “soft-bellied, liberal congressmen” for not giving the U.S. military “the tools they need to do the job.” Never elucidating what “tools” they could use not already available to them—nerve gas? atomic bombs?—he went on to call Reagan’s cannon fodder “the right stuff,” and “the best we have,” adding, “Ronald Reagan is our president and Ronald Reagan is our chief, my son’s chief…If he saw it was necessary, with the fine advice I know he gets, to order an air strike, then it was necessary.”

Apart from the fact that it has since become patently clear that Reagan’s advice was not so fine, it was a disgusting show, to say the least, to see a father get mileage out of his own son’s death to bandstand his own jingoist support for a military-political boondoggle which is becoming increasingly unpopular among Americans, including politicians and the military itself. (Americans seem to only support military adventures which can be won easily, like invasions of tiny islands and battles’ against “well trained” and under-armed carpenters and cement layers, but that is another story.) Nor did anyone bother to ask the opinions of the family members of the “undisclosed number of civilians killed when another pilot ditched his downed jet over a residential area of a Lebanese coastal town in the same operation.

We don’t happen to agree that pilots like Mark Lange are “the best we have.” After all, if they had been born and raised in the Soviet Union or Syria, they would likely be doing the same thing—flying these monstrous weapons at the beck and call of their respective states. Though it must take a perverse sort of daring, it takes no particular courage to follow orders and kill on command—especially when the targets are so conveniently removed that one doesn’t have to see the actual human costs of one’s damage, and especially in exchange for top salaries, prestige and “kicks.” Saying no to the state, as draft resisters have done in the face of persecution and personal suffering takes far more genuine courage and moral vigor in our estimation.

Mr. Lange has another unfortunate son whom he is prepared to sacrifice to the god of war. But he seems not only willing to toss Mark’s younger (and sadly willing) brother into the flames, but all of us. For when Reagan (or any other demented politician drunk with power and history) makes the decision (based on the finest of advice, of course) to order nuclear air strikes against “the enemy,” there will be enough of the “right stuff” around to unthinkingly do as they’re told, and enough imbeciles like Mr. Lange to applaud (though their cheerleading will be superfluous).

Though it didn’t get into the papers or on TV, we’re willing to bet that there are many people who didn’t appreciate having Lange’s warmongering shoved down their throats on the basis of someone else’s death—many people have lost loved ones to the war machine and don’t feel as he does. We only heard about those who agreed when the Free Press ran a story about the sympathetic mail Lange received. “There’s a lot of dormant patriotism out there which just Pssssh—suddenly exploded,” he was quoted as saying. Rather than an explosion of patriotism, it sounds more like hot air escaping from a windbag, Mr. Lange.

While people were going through garbage dumpsters looking for food and dying of the record cold temperatures in the city in December, it was announced that the $250,000 “People Protection Plan” (P3) of the Federal Emergency Management Agency had been completed for Detroit. This brilliant scheme would supposedly organize the evacuation of 3.5 million Detroit residents within 72 hours in the case of a nuclear war. People from the tri-county area would be evacuated to western and northern Michigan as well as to the thumb area of the state. The plan also includes provision for post-attack care—presumably organizing how to file all the change-of-address cards with the Post Office. Notwithstanding the fact that people would have to drive from one “risk area” (Detroit) through others such as Flint, Midland and Ann Arbor, on their way to shelter, and that the “host counties,” if evacuees were to make it, might not be so willing to provide for their urban guests, the plan is based on the assumption that there would be enough warning for the evacuation to be put into effect. In reality, however, we’d have about ten to thirty minutes to get from the city 300 miles to Mackinac, and driving is bound to be a bit difficult in the rush hour traffic of mass evacuation, not to mention the fires, the general ecological devastation and the collapse of the ozone layer caused by the bombings themselves. Take your sunglasses!

“The plan may seem like fantasyland,” says Audrey Seay, director of emergency medical services for the Wayne County Health Department, reassuringly adding, “but without the plan you don’t even have that.” There you have it: fantasy-land is better than nothing.

Now we hear that those charming fellows at the Pentagon are shifting their emphasis towards planning World War Four—how to threaten to “bounce the Russian’s rubble” around with a few more missiles to make them capitulate in the aftermath of World War Three! Fantasy is obviously big this year. But one thing is no fantasy: all this makes it clear that they really are planning to go ahead with it; they are not going to “let Lawrence live” after all.

All over the country cities and towns have refused to accept plans for civil defense in the case of nuclear attack. Why don’t the liberals in the Nuclear Freeze who are so chummy with politicians start a campaign to have Detroit renounce civil defense? We can do without the fantasies thank you…

Some people aren’t waiting for nuclear war. In 1983 the murder rate in the city jumped considerably, going well over six hundred. Say yes to Detroit or kill you…