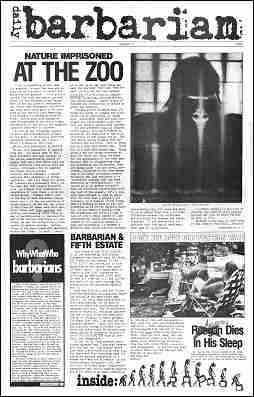 This issue of the Daily Barbarian is not only being distributed throughout the Detroit area for free, but thanks to the members of the Fifth Estate collective, it is also appearing as the center four pages of their paper. This means that along with the 3,000 copies we’re printing, an additional 3,000 will be sent all over the U.S. and different parts of the world through the subscription and bookstore sales of the FE.

Both the Barbarian and the FE are anti-authoritarian publications, sharing basically the same views and ideals. In fact, some people work on both publications, but we want to point out that both publications are separate entities. The FE collective makes no editorial decisions concerning the Barbarian, and the same goes for us in relation to their project. You might then ask, “Why publish two separate papers?” Apart from the two publications having different functions and priorities, we believe that there should be dozens of Barbarians and Fifth Estates, not only in Detroit, but everywhere.

In the ’60s, “underground” newspapers appeared and flourished because not only had the “legitimate” press lost what little credibility they had, but there was also a growing need for people to express themselves in a manner that was not allowable in the establishment newspapers. Now it’s the ’80s and those “legitimate” newspapers that people rebelled against are still here, with their traditional policy of lies and non-events they just put some new window-dressing on it—their traditional policy of inaccessibility and all of this with even less credibility than before. They’re still here, but the “alternative” press—we don’t mean those slick advertising circulars like the Detroit Metro Times—has almost disappeared. We believe the need is still there for the FEs and Barbarians of the world.