The Draft is Still an Issue

The following two letters were recently received from fugitive draft resister Paul Jacob and from his support committee, the Paul Jacob Action Group. Paul was indicted in September 1982 for failure to register for the draft and has been the subject of an unsuccessful nation-wide search by the FBI for refusing to submit to arrest. We are pleased to report that at this date Paul Jacob is still “at-large.”

The letter from the Action Group was a response to one from the Fifth Estate inquiring about their publication Scream! and ragging them about copyrighting their poster. Both the Group and Jacob are “free market” libertarian anarchists who favor the destruction of the state, but see capitalist property relations as essential to human freedom.

We can only hope that this absurd position will be abandoned once they examine the inextricable role the state and capital have played in one another’s development and realize that one cannot exist without the other. However, all disagreements aside, we wish Paul a long, safe life as a free man. Fuck the Draft!

Resisting registration is the single most important thing a draft-age man can do to stop the draft, and the foreign intervention and war the draft fosters. I’m proud to have done so. But as one of the sixteen indicted resisters I felt I must go a step further and also resist the government’s efforts to prosecute me.

I went underground because I believe I’ll certainly be sent to prison if I go to their court. True, today no one is in prison, but Russ Ford, Ed Hasbrouck, and Ben Sasway have spent some time there and Sasway and Gary Eklund are only free on appeal—they were sentenced to two and a half years and two years respectively.

Vocal political resisters, outside the major media centers, will be convicted and receive prison sentences—especially in the South (I’m from Arkansas), the rural West and Mid-West, or military-dominated areas such as San Diego. Granted, we may still win a few victories in the lower courts, but the government will appeal any setback to the Supreme court and there we’ll surely lose.

The Supreme court, as everyone should know, has ruled in favor of the Selective Service System and conscription over every objection (of which there are many). They have already guarded the program with “stays” of negative lower court rulings on the whole registration program (1980) and recently on student aid. With the present Supreme Court on the bench (terms are for life, of course), going to court is a predetermined failure and an expensive road to prison.

Understandably, the vision of civil disobedience accepted by many attempts to stop a law by overloading the judicial system with law-breakers, but after well over three years of registration and resistance to it, the government has only dared prosecute a select group of sixteen. Sixteen of us can’t shut down the legal system and—thus there’s no point going to court.

I feel resisting prosecution is even more important because the government’s prosecution program makes going to court so counterproductive. Strategically, Prosecutions have been a premeditated attempt to intimidate (scare) resisters and potential resisters into the belief that resistance may lead to prison. Disastrously, the government has been highly successful with their “show trials”—many young men I speak with are falsely convinced that a few resisters are now behind bars. I’ve found 18 year olds about to be paroled from the prison of public school are not going to follow the advice of some guy who just got locked in a real “iron-bar” prison.

My trial and certain conviction would only strengthen the perception of young men that people are now in prison for not registering; that they, personally, won’t be able to resist without serious penalties. Faced with even a potential prison term (which the relentless flow of warning letters never fail to mention), many register.

If our accepted strategy is non-registration, which it is, then these “many ” are the crucial difference between success or failure. It is imperative that we expose the enforcement of draft registration for the monstrous bluff that it is. We can only do this by staying out of the court and out of jail.

I’m underground because I want to be free to live my life in my own way. I resisted registration because I have better things to do than kill on command! I also have plans that don’t include sitting in a jail cell.

People in the press have asked resisters if they are prepared to go to prison—prison is unacceptable. Prison is a disgusting sewer that no decent person could ever deserve.

Draft resisters, though men of conscience, will be thrown in the same cells as real criminals. Beatings and homosexual rape are common in prison. During the trial of Enten Eller, a federal judge agreed with a probation officer that if sent to jail Eller would almost certainly be sexually assaulted.

How can a supposedly free country (ha!) take intelligent, peaceful individuals and lock them in cages to be beaten and degraded all for the “high crime” of refusing to sign their names on a postcard? And how can a person, aware of this reality, voluntarily place himself in a courtroom? I know I can’t.

Lastly, I’m avoiding going to court because I don’t want to sanction this legal system. Even if a resister doesn’t go underground he should at least not appear in court voluntarily. Don’t let people mistake the courtroom as a place we freely enter for a just decision of the issue.

I wish all resisters success on whatever path they choose to embark upon, but I strongly advise anyone seriously facing an indictment to go underground to avoid persecution. Going underground frees the peaceful non-registrant from the grip of an unjust legal system and the undue horror of a brutal prison system. And avoiding prosecution is a clear signal that the choice cannot be limited to registration or prosecution. The government cannot command our lives and liberties at their whim—I’m free.

We are glad to trade publications and enjoyed your two issues as well as the stuff on [draft resister] Dan Rutt. We have been hard to locate and certainly appreciate any material or contact with anti-draft, antiwar groups. You can also send anything for Paul Jacob to us at our new address: Scream! P.O. Box 75285, Washington D.C. 20013.

In regard to the “Paul Jacob Is Free” poster, we can assure you that no “cop thugs” will break down your doors on orders from us if you use it. Seriously, we don’t know why it had a copyright on it because we couldn’t enforce it if we wanted to and we would be excited if someone reprinted it and put it up. Getting the message out is the important thing. We suspect that those in charge of the poster put “copyright’ rather than “produced by” wanting to let people know who did it.

We look forward to Scream!ing your way in the future and thank you for your support of Paul Jacob and all draft resisters.

One clarification in Paul Jacob’s letter: Late last year Ed Hasbrouck had his probation revoked by his sentencing judge and is currently in Lewisburg Federal Prison Camp, according to the March 1984 issue of Resistance News.

Although news of resistance has diminished somewhat in recent months, even the Selective Service System (SSS) admits to 700,000 missing registrations, in addition to four million estimated by the government to have been rendered useless by the absence of a current address or other essential information.

Also, according to Resistance News, Italian anarchist draft resister Mauro Zanoni remains imprisoned in a military barracks after more than a year (see FE, Summer 1983). Three other Italian resisters, Ranato Pomari, Lorenzo Porta, and Francesco Grazioni, left their alternative “civilian service” assignments and went to work at the International Peace Camp in Comiso, Sicily. After two months they were arrested for desertion.

The National Resistance Committee is sponsoring a Conference on Registration and the Draft, July 14 and 15 in San Francisco. It will immediately precede the Democratic National Convention also being held there and will focus on strengthening support for non-registrants and broadening connections with Third World communities.

Information on the conference and sample copies of Resistance News may be obtained from the Regional Young Adult Project, 330 Ellis St., Rm. 518, San Francisco, CA 94102. Donations for postage would be helpful. 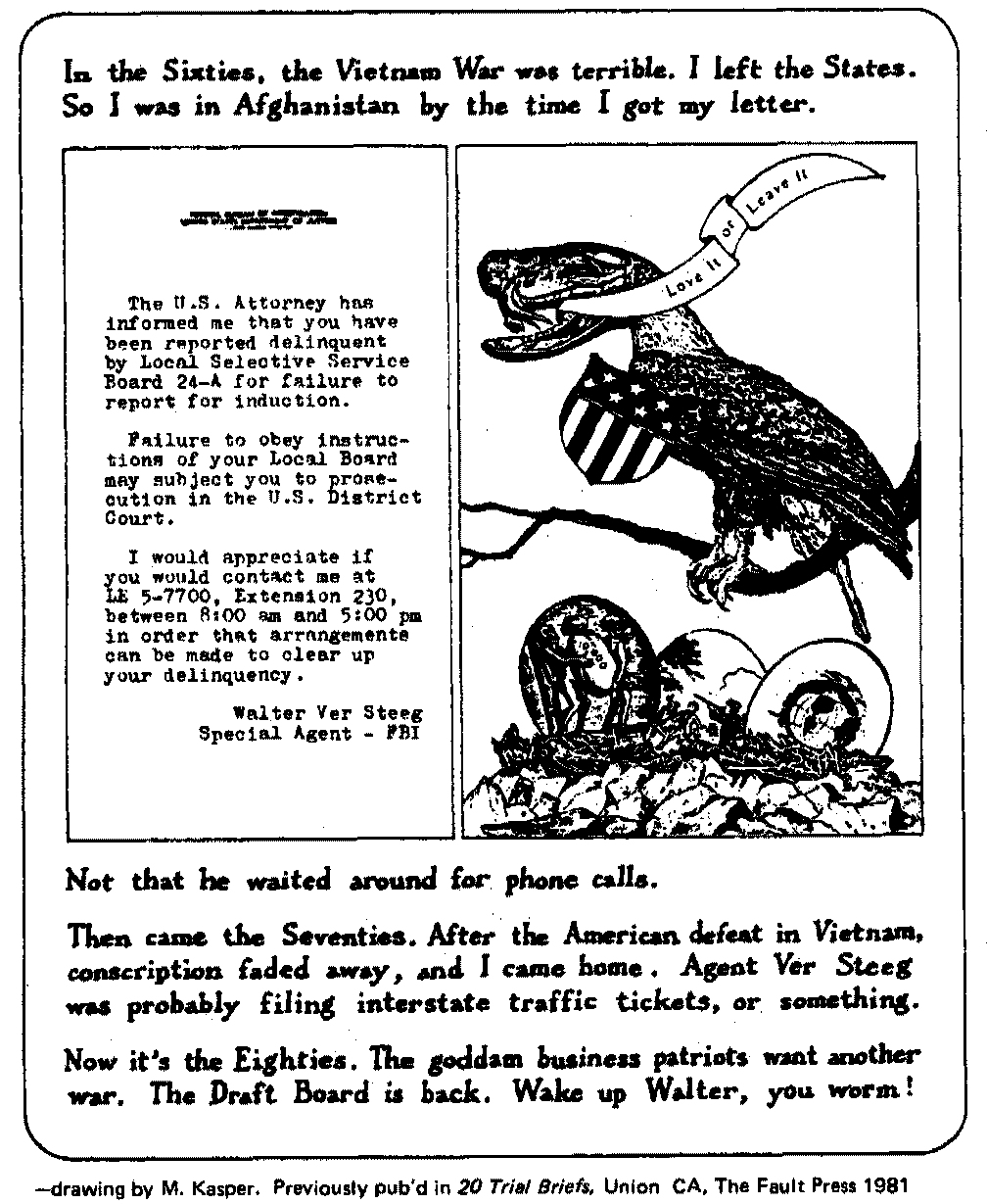 In the ‘Sixties, the Vietnam War was terrible. I left the States. So I was in Afghanistan by the time I got my letter.

“…the U.S. Attorney has informed me that you have been reported delinquent by Local Selective Service Board 24-A for failure to report for induction.

“Failure to obey instructions of your Local Board may subject you to prosecution in the U.S. District Court.

Not that he waited around for phone calls.

Then came the ‘Seventies. After the American defeat in Vietnam, conscription faded away, and I came home. Agent Ver Steeg was probably filing interstate traffic tickets, or something.

Now it’s the ‘Eighties. The goddam business patriots want another war. The Draft Board is back. Wake up Walter, you worm!