Who Threw the Bomb? 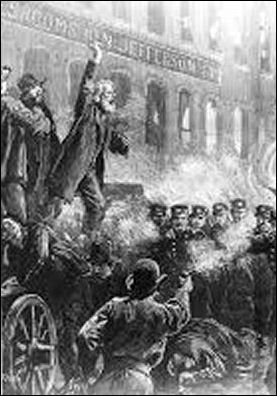 Like so many other historical instances of state persecution, such as the Sacco and Vanzetti and the Rosenberg cases, the 1886 Haymarket Affair continues to haunt the present with its injustices. It is almost universally accepted in the Haymarket case that the five anarchists condemned to death by the state of Illinois were victims of an incredible miscarriage of justice, a view held even at that time.

Evidence presented in 1893 to then Illinois Governor Peter Altgeld demonstrated to his satisfaction that the accused were not responsible for the bomb thrown into a squad of police who had come to break-up a protest meeting of workers near Haymarket Square in Chicago. One police officer was killed in the blast. [Web archive note: see correction at the end of this article] Gov. Altgeld pardoned the remaining jailed anarchists and exonerated those who had been executed.

For 100 years there has been much speculation as to who actually threw the bomb, with suggestions that it was either a police agent or an industrial spy being the most prevalent explanations in anarchist circles. During the year of the incident, Chicago was the scene of militant working class battles with a number of vicious employers. The day previous to the bombing, city police had shot into a crowd of striking McCormick Reaper workers, killing two and wounding several others. It was assumed by many that the bombing was part of the generalized attack on workers by the state and the corporations.

However, in a recent work by Paul Avrich (an historian sympathetic to anarchism) suspicion is once again turned to members of the anarchist movement. In his book, The Haymarket Tragedy, Avrich speculates that it may have been George Schwab, a shoemaker and labor militant from New York, who threw the lethal projectile. However, a November 12, 1985 New York Times article quotes Avrich as having come to a different conclusion of late concerning the identity of the bomb thrower based on “evidence” he has received from the granddaughter of another anarchist activist of the period. His speculation centers on George Meng, who had been a Chicago delegate to an anarchist conference in Pittsburgh in 1883. Avrich is quoted as saying “While we cannot say for certain, I believe he probably threw the bomb.”

The evidence for the contention that appears to have Avrich so excited came from a Berkeley, California psychologist who wrote the historian to say that her mother had told her that her grandfather, George Meng, had implied that he was the bomb thrower. In a telephone interview, the granddaughter stated that she was sure it was her grandfather because “he hobnobbed with the top people in the anarchist organization and never got credit for anything. I have the feeling that he said, ‘I’ll show ’em.’

That’s it? Psychological speculation based on hearsay from a hundred years ago which virtually amounts to a slander of anarchist principles–“Hobnobbed”, “Top people”, “Anarchist organization”, “Never got credit”?

We assumed that Avrich had been severely misquoted and called him in New York City to get his side of things. But, no, he told us the article fairly well reflected his feelings and that although there may be those within the contemporary anti-authoritarian movement who would object to his naming an anarchist as the bomber, he felt it necessary to let his historical research take him where it might without concern for ideology.

That is all fine, but to remove suspicion from the police or the numerous corporate provocateurs active at the time on such flimsy evidence does not seem to do ample justice to the memory of those murdered by the state. It’s not even that we would deem it reprehensible for a worker to defend himself and his fellows against another murderous police assault given the attacks of the previous day. In fact, it would be an act to defend. But to put forth a contention which ascribes the motivation for the bombing to crass psychological ones seems both unsupportable as history and a debasement of the high ideals which seem to have been the basis for anarchist activity in that period.

In our next issue we will have a full range of books on the Haymarket Affair including The Haymarket Tragedy by Paul Avrich.

1. See “A Bicentennial moment: Haymarket Square Riot” by Bob Nirkind” (FE #272, May, 1976) for the correct number of police killed and injured:
“As Captain Ward commanded the meeting to disperse, someone south of the speakers’ wagon pitched a bomb into the mass of police, killing seven and wounding another 66. The police immediately opened fire on the crowd killing several and wounding an additional 200.”

2. See Kenyon Zimmer, Haymarket and the Rise of Syndicalism (Chapter 21): “At around 10:30, as the event was winding down, police marched on the meeting and ordered it to disperse. In response, an unknown individual in the crowd–though in all likelihood someone affiliated with the IWPA–threw a homemade bomb into the police ranks. The explosion and subsequent panicked police gunfire resulted in the deaths of seven policemen and at least four workers, as well as dozens of injuries.”