Imagine the United States split regionally into conservative-fascist and leftist popular front-anarchist zones. Civil war rages at the shifting boundary lines with half the country under the domination of an insurgent military right-wing junta determined to destroy the elected government and all individuals and organizations of the left. Then imagine that simultaneously, behind the lines in the popular front zone (say, most of the East and West coasts), there are widespread decentralized efforts to transform the society through economic and social collectivization in producers’ cooperatives, free schools, free health centers, neighborhood councils, local popular assemblies-the assumption of community self-responsibility through direct action from the bottom up. 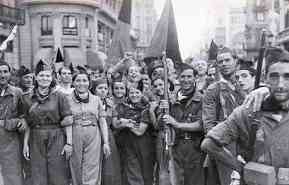 Imagine also that the organizations and individuals behind such efforts are constantly threatened with imprisonment or assassination by those in the official popular front government. Imagine all of this with an intensity at least four times greater than the enthusiasm, the polarization and the confrontations of the 1960’s. At this point, we can begin to appreciate the dimensions of the Spanish revolution of 50 years ago.

How and why did the civil war begin? How could people behind the lines have the energy and vision, in the midst of a civil war, to carry out the massive efforts of social transformation? From where did such organizations and individuals emerge, with the strength and purpose to attempt such efforts in the face of repression from the very government they were allied with in the civil war? What was the quality of freedom in the experiments of the new society themselves? And, despite the impressive release of liberatory instincts and practice, what were its limitations, its compromises, and the causes of its ultimate collapse three years later? Could there have been alternative approaches, more positive and lasting?

The Spanish revolution was the largest-scale and most intense testing place of the relevance and strength of anarchist ideas in the modern world. In the midst of the international context of mounting fascist strength and aggression in the late 1930’s, and faced with an attempted military coup d’etat supported by fascist Italy and Nazi Germany, the Spanish anarchist movement organized the most significant and immediate resistance.

For nearly the next three years anarchists took the greatest initiative in creating massive social experiments which put their libertarian vision into practice. During that time, tens of thousands of anarchists were slaughtered at the front lines fighting the fascists, while the official Loyalist government increasingly sabotaged efforts of revolutionary transformation behind the lines and persecuted its leading forces. Later, anarchists even participated in official government positions from the national cabinet level on down, and, organizationally, the anarchist movement began to develop hierarchical tendencies contradictory to its ideals. The Spanish revolution was the time of the greatest brilliance of anarchist accomplishments and also the time of greatest contradiction and self-critique.

Following the fall of the right-wing Primo de Rivera dictatorship in 1930 and the monarchy itself in 1931, the second republic assumed the political task of organizing the continuing early industrialization of Spanish society and preventing the class conflict inherent in this process from exploding into open warfare. Critically located within this context was the anarchist-organized Confederación Nacional del Trabajo, the CNT. By the mid-1930’s, its membership of 1.5 million impoverished peasants and urban workers represented a strong moral and actively political movement several generations old, deeply connecting the conscious 19th century anarchist ideological tradition with the underlying Spanish cultural instincts of spontaneity, anti-authoritarianism and collective solidarity.

Strongly influenced by a separate militant anarchist political grouping, the Federación Anarquista Ibérica (FAI) which had some 35,000 members by 1936, the CNT was a formidable political presence-far more significantly placed than anarchists in any other part of the world. Roughly equal in strength, the CNT and the reformist-led socialist trade union UGT contained the vast majority of working class families in Spain (total Spanish population was about 26 million in 1936).

Immediately Took to the Streets

With ideological and direct material support from European fascism, the Spanish nationalist forces (led by Francisco Franco and other top generals) attempted their coup d’etat against the recently-elected moderately leftist popular front government on July 17, 1936. CNT and FAI members immediately took to the streets with whatever ancient and inadequate weapons were available in town after town, city after city, attempting to surround military barracks, to prevent military occupation. Joined at the street level by thousands of other anti-fascists as well, this initiative was all the more crucial in the absence of the central government’s willingness to act. Like its several successors through early 1939-paralyzed between the desire to stay in power and its hostility to local empowerment-the Loyalist regime was effectively dormant in the next few decisive weeks.

Anarchists, socialists, POUMistas (Opposition Communists), and eventually the Communists (through the influence and prestige of Soviet aid and “advisors”) formed their own militia units to prevent further expansion of the zones where the fascist coup had succeeded. In the northeastern part of Loyalist Spain—Catalonia, Aragon and part of the Levant—the CNT was the overwhelming majority presence in the working class. To their great credit, the anarchists refused to impose an “anarchist society” on the remaining population in these areas, though they unquestionably had the strength to establish their own regime (as attempted soon after by the several statist ideologies). Instead, the great majority of anarchists either fought at the front or constructed the new society in the rear.

Within several weeks, most farmland in Catalonia and Aragon was collectivized. Similarly, in Barcelona, units of workers’ self-management operated the vast majority of factories, utilities and services. Yet the supply and coordination demands of a traditionally-fought civil war- and the international isolation of Loyalist Spain from effective support (except for Soviet aid, which attached its own imperialist conditions) caused many respected anarchists to take official government posts, to defend coalition with the anti-fascist popular front at whatever costs, and even to attempt a form of “democratic centralism” within the anarchist movement itself (for “greater decision-making efficiency”).

Most anarchists at the regional and local level tried to ignore such compromises and continued in their own efforts to develop revolutionary collective experiences at the core of their daily lives. Many, including large numbers of those most critical of collaboration, were killed off at the front or imprisoned or murdered by the Loyalist regime and Communist secret police. The armed anarchist and POUM confrontation with the Communists and other statists in the Barcelona street fighting of early May 1937 was the closest this contradiction came to a direct resolution. Yet the continued determination of anarchists in Aragon to reconstruct their farm collectives again and again after suppression by the Loyalist regime was also an amazing example of anarchist tenacity and courage in an incredibly hostile political context.

Ultimately, the negative side of the Spanish revolution—the internal contradictions, the triumph of the fascists—raises questions about the very model of armed social revolution inherited from the 18th and 19th centuries. How much and what type of change can be accomplished within one country alone-especially in the face of murderous weapons in the hands of counter-revolutionaries, authoritarianism and repression by leftist parties, and amidst a population generally (including many within the anarchist movement) where a clear anarchist consciousness does not yet prevail?

The Spanish revolution raises such issues and begins to suggest possible answers still of relevance today. Beyond this, from the hellish context of the late 1930s, the immense courage, dignity, constructive energy and non-hierarchical positive vision shown by the Spanish anarchist movement cannot be forgotten. From Spain, we can remind ourselves that anarchism is not simply a cultural current or a practice among small groups or individuals. Despite tremendous obstacles, it is a consciousness that can become a powerful and immensely creative large-scale social presence.