A Memoir of Fredy Perlman 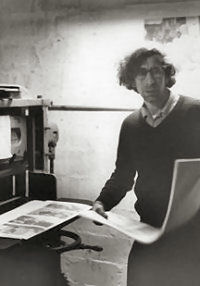 Fredy Perlman with the cover of Letters of Insurgents at Detroit’s Black and Red Print co-op, 1976

I cannot say with any certainty what kind of response this perceptive, if rather abbreviated memoir would elicit from a person who did not know Fredy Perlman or his writings. It was written, clearly, for those familiar at least with his work, and they without a doubt will enjoy this glimpse of the man whose voice played such a large role in reviving libertarian traditions and articulating the critical primitivism that has profoundly transformed anti-authoritarian ideas during the last decade.

This book is not, nor does it make any claim to be a comprehensive intellectual biography. That would take far more than its 150 or so pages. But it nevertheless succeeds not only in giving a thoughtful survey of Fredy’s “intellectual trajectory” (as the author, his companion of a quarter century, Lorraine Perlman, puts it in her introductory note); it also manages to capture, sometimes strikingly through characteristic moments and statements, the whole man.

One is struck alternately by the universal and unique aspects of Fredy’s life. A refugee in a century of refugees, he narrowly escaped disappearing down the same abyss of the Nazi Final Solution in which he lost many of his relatives. An immigrant in the Americas, he spent his childhood in Bolivia, speaking Czech, German and Spanish. (One of his most vivid childhood memories was that of being chased and frightened by a llama.) Later, he came with his parents to the United States, where he grew up in New York and Kentucky, a student of merit who once won a television set in an essay competition on the theme of freedom, and who as a youth found refuge in one of those representative circles that sought to resist the stultifying effects of the conformist culture of the 1950s in jazz, classical music, and intellectual conversation.

How an individual becomes a rebel and a dissident is a question that is indirectly raised but left unanswered by the book; those who have themselves been radicalized will see traces of their own lives in the relationship between Fredy and his brother, a talented and intelligent person who whole-heartedly embraced U.S. culture and went the road of middle class life. One may get the impression from the book that there never was any choice for Fredy, but that is simply not true. He lived the same struggles with his desires and his conscience, both as a young person and later, for example, during his brief academic career, as do we all. But Fredy did yearn for something other than what his brother and so many others have chosen, carrying within him a voracious hunger for authentic experience and understanding, and little ambition in the terms of this world.

From Rebel to Revolutionary

The nothingness of life in the 1950s seems to have done to Fredy what it did to so many others, and as a youth he set out from Kentucky in his car and drove straight to Los Angeles, where, archetypically, he went to sleep on the beach by the Pacific after spending his last few cents on coffee and cigarettes. In LA, he enrolled at UCLA and became involved in the Daily Bruin, the student paper, participating in a high-spirited struggle against the anti-communist witch-hunts on the campus that McCarthyites had dubbed “the little red school house.” When that fight was essentially lost, he found his way to New York City, to Columbia University and engagement with radical sociologist C. Wright Mills (who strongly influenced him), and to the young music student from Iowa, Lorraine Nybakken, who became his lifelong companion. After a period of vigorous intellectual activity and political involvement, they decided to abandon the U.S. with its growing war hysteria for life in Europe, where they spent nearly four years.

Many of Fredy’s pivotal intellectual and political interests were formed in this period, both in New York and in Yugoslavia: the desire to understand civilization systematically, to find a critical coherence; particularly, the analysis of empire that informed so much of his work, allowing him to revolutionize marxian thinking and to move beyond its assumptions of technological progress. His experiences and studies in Yugoslavia helped him later to describe the emergence of capitalist relations (no matter what their labels) and to appreciate and defend the values of those vernacular societies bulldozed by so-called progress and development.

But it was Paris ’68 that truly galvanized Fredy, as it did so many others. Whatever he was and thought before passing through that crucible, he would be forever changed. The revolutionary upheaval in France brought him into contact with dangerous new ideas and radical traditions he had not previously known. The watershed of 1968 led him eventually back to the U.S., to revolutionary publishing and to Detroit.

If 1968 and its aftermath led Fredy to investigate the mysterious process of alienation by which human beings reproduce their own misery, as well as the process by which they resist and thus renew what is human in themselves, the experience of organizing and working on the Detroit Printing Co-op project showed him in practical terms that people could cooperate and create communities, even under the myriad pressures of capitalist society. During that time as well, as Lorraine’s marvelous insight in retrospect observes, their motor trip to Alaska opened his eyes more than ever before to the terrible cleft between humanity and the natural world, and then inevitably to deeper, sometimes obscure, but always fruitful questions about the process of domestication of nature and human beings. One detects his later “primitivism” taking seed in this period, only to become manifest afterward, during the late 1970s and early 1980s, as our intense discussions and arguments—often around the kitchen table at Fredy and Lorraine’s house on Detroit’s southwest side—led us to a deeper conception of politics: a critique of civilization itself.

Fredy, always skeptical of programs and ideologies, of all “isms,” had shied away from party politics in the 1950s and 1960s and had wisely declined to become a pro-situ ideologue in the 1970s. Fredy reassessed politics, even revolutionary politics in his search for new paths to social transformation and human self-realization. Eventually, he immersed himself in the study of native peoples, looking for ways to subvert and retell History’s official, falsified story. This was the project in which he was so intensely engaged when his life was cut short by a body that could not match his spirit.

Lorraine Perlman has done a fine job of revealing many aspects of Fredy’s life that give a sense of the man and his ideas. She has also accurately (probably even a bit generously) captured the community life here in which Fredy and Lorraine participated so actively. Her direct and unadorned style lets Fredy’s life speak for itself; one cannot help but see it as exemplary.

I mean exemplary not in the sense of being entirely, and consistently correct or somehow saintly. Claims of sainthood and larger-than-life heroism are for the kinds of racketeers that Fredy and Lorraine critiqued in many of their Black & Red publications. Fredy was completely human: generous, supportive, loyal, with a streak of zaniness, but also capable of being unyielding in disagreements, occasionally suspicious of other people’s motives, even petty.

Fredy was exemplary, nevertheless, because his personal trajectory was representative of a time when rebels had to reexamine their forms of revolt and their lives as they found them being conquered and colonized by the very forces they had originally set out to oppose. Thus, his politics matured into a deepening refusal that overlapped with a corresponding affirmation of things that modern politics forgets: the toughness, self-reliance and creative resilience of traditional cultures, the manifold ways in which individuals manage to grow by breaking through the cracks in civilization’s concrete, the need to remember and the need to sing. As Gary Snyder has written in The Old Ways, “At very bottom is the question ‘how do you prepare your mind to become a singer.'” Fredy grappled with this question even as his physical heart was giving out.

My main criticism of the book is that there is too little of Lorraine in it. She argues that this is not a full-fledged biography but a memoir; and, one must concede, she has done the writing and thus is not obliged to tell more than she has. Fair enough; the story is still powerful. It overflows its subject, as it should, to his milieu, his time and to the large questions with which he struggled—the possibility of freedom, of reconstituting human community, of reconnecting with the rhythms of the natural world, of simply maintaining one’s integrity under capitalism. The book affirms the possibility that people can survive, change, even thrive.

We live in grim times, indeed. And the book did not let me forget this reality either. I was somehow reminded of how far things have gone since the appearance of the mechanized dead thing he called Leviathan, particularly in the final chapters. I think that Fredy chose to explore the possibility of singing in fact because so many forms of resistance appeared exhausted and problematic.

But his singing reminds us that anything—and perhaps everything—is still possible, that the Golden Age, as Rousseau once remarked, still lies within us. Thus I, too, will confess, along with Lorraine, that I feel privileged to have known him and to have shared a part of his journey.