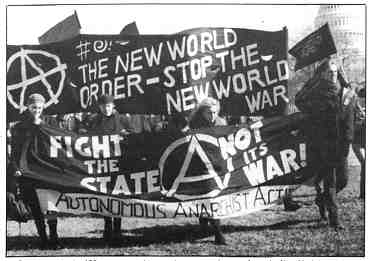 The following is a brief summary of the many anti-war actions which occurred in the Detroit area since just before the January 16 U.S. air assault on Iraq. The numbers involved here were considerably lower than anti-war actions in other large metropolitan areas such as San Francisco, Seattle, Portland, Minneapolis, Chicago and New York, where tens, and even hundreds, of thousands participated. Reasons for the small numbers in Detroit are linked to racial, geographical and political patterns of our city (a story best told another time), but we did what we could with the people we had to impede the war machine and express the depth of our rage against the government.

The reader may note that none of the events carry with them any sort of evaluation or criticism, but this should not be taken as a sign of blanket approval of actions which ran from the radically inspired to the dismally liberal—some having the character of both. We offer this merely as a chronicle of responses to a monstrously unnecessary war, but reflections on the nature of anti-war actions both here and around the world are welcome. We invite readers to write us with reports and criticisms of what occurred in their areas.

Jan. 14—400 people march at the Military Entrance Processing Station in what local media calls the “first anti-war demonstration in Detroit in 20 years.” Of course, there have been hundreds of anti-war and related demos in the last 20 years, but the sponge-soaked media squeezed those out of its memory.

The protest was put together by a loose group of anarchists & the other “usual suspects,” and was filled with anger, humor, street theatre, and confrontation with the cops. As the demo progressed into the night, people began marching in the street and the cops responded with riot gear and a paddy wagon, indiscriminately arresting 14 people and breaking up the picket line.

Jan. 15—Actions occur throughout metro Detroit and Ann Arbor. Wayne State students build a large anti-war Saudi Memorial which is demolished by the school, rebuilt the next day, and again destroyed.

Downtown, a coalition of African-American students lead a march of 400 who energetically parade through the area.

University of Michigan-Dearborn campus students hold a march and rally with 500 students. Vigils and rallies in Ann Arbor.

Jan. 16—2,500 students spontaneously march at the U-M Ann Arbor at midnight as the U.S. begins attack on Iraq.

Jan. 17—Detroit Mayor Coleman Young declares a State of Emergency and asks Michigan Governor John Engler to send in the National Guard to patrol the U.S./Canadian border against “terrorism.” Despite anti-Arab hysteria, the governor refuses.

Jan. 26—Another march in Washington with many Detroiters in attendance for a march totaling 250,000. Some join with 400 anarchists to form a loud, energetic contingent, throwing bricks through bank windows, and tearing down a fence outside the FBI.

Feb. 5—150 demonstrate at the Royal Oak recruiting center. Demo organized by D.O.V.E., students from suburban high schools who are confronted by marine recruits shouting, “Get the fuck out of my country.”

Feb. 6—Women in Unity Against the War, 200 women of varied ethnic origins, hold a silent protest in a downtown square. Dressed in black in the spirit of the Women in Black of Israel and Palestine, they state, “As mothers, sisters, and daughters, we wish to replace hierarchy with community” and “oppose an oil/war economy.”

Feb. 15—A Valentine’s Day sit-in and “Make Love Not War” action is held inside the Federal Building. Unamused, guards “escort” (drag) four people who refuse to leave from the building.

Feb. 21—International Student Day of Action Against the War/Malcolm X Day. 230 actions in 35 states, Canada and around the world. At Wayne State, students build another war memorial constructed of broken televisions, oil and gas cans, wooden cops, McDonald’s wrappers, money, pictures of Bush, tire rims, etc. Street theatre. Later, 300 people march through the Cultural Center for a rally at the university which ends with leftists brawling for control of the microphone (see article elsewhere in issue). At night 100 attend a Malcolm X commemoration.

Ann Arbor—200 students picket the Navy Recruitment Center and four people are arrested for setting up a literature table inside the Federal Bldg.

Feb. 24—200 people, mainly Arab-Americans march through a Chaldean district in a demo called by D.O.V.E. and an anti-war action network.

Feb. 25—300 people respond to the ground war by protesting at the Federal Building.

Feb. 27—10 students stage a “die-in” at Wayne State, then carry the wounded through the student center wrapped in a Mobil Oil banner. Patriotic onlookers kick participants, throw things and shout, “This isn’t how you support the troops.”

This chronology is far from exhaustive. Unreported here are numerous other events—town meetings, teach-ins, small gatherings, etc.—plus many we heard about after the completion of this page.

Also, there were benefits, rock concerts, poetry readings and other cultural activity where anti-war sentiment was expressed.

On the dark side, there were many assaults on Detroit’s Arab community, the largest outside of the Middle East. Always the object of racism, attacks on Arabs increased after the invasion of Kuwait: stores burned, people shot at, beaten, and threatened, some for only “looking Arab.”