The Marco Polo of Anarchism

Among Germinal Gracia’s many pseudonyms (Germen, Julio Fuentes, Quipo Amauta), Victor Garcia was the most common. Born in Barcelona, Spain on August 24, 1919, he spent his infancy and boyhood in Mequinenza, a village in Aragon, a fact that he always mentioned with pride. But it was in Barcelona, at the age of 14, that he started working in a textile plant and became a member of the anarcho-syndicalist union, the C.N.T. 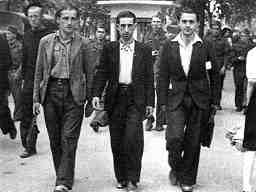 On the fateful day of July 19, 1936 the people of Barcelona defeated Franco’s fascist rebel army and started carrying out a true revolution, one for which the workers had been preparing and waiting for a long time. Drawn by the enthusiasm of these events, Germinal Gracia, at 16, volunteered for the Anarchist column “Los Aguiluchos de la F.A.I.” When his true age was discovered, he was sent back to Barcelona where he took part in “Libertarian Youth” actions against the already growing counter-revolutionary acts of the politicians and the cowardly attitude of some of the so-called “responsible militants” of the anarchist C.N.T.-F.A.I. committees.

In August 1936 a group called “Quijotes del Ideal” had been formed by three teenagers in a district of Barcelona. It later expanded to Germinal’s district and he joined in their activities. Its purpose was to maintain the integrity of anarchist principles and to fight for the Revolution, opposing the politicians’ slogan “First of all win the war.” Dramatic flyers were printed and distributed expressing an opinion common among most conscientious militants that the denial of the Revolution would mean losing the fight against fascism. These teenagers were present at the barricades when Barcelona became the Spanish Kronstadt on May 3, 1937, when the Communist Party launched an attack against the revolution.

In September 1937 the first issue of “El Quijote” appeared. The eight-page paper attacked the government’s and the political parties’ treachery, as well as the “officials” of the C.N.T. and its policies. Although it was heavily censored, its printers always managed to print a good number of copies before the censored articles were blocked out. Three issues of “El Quijote” were published before it was suppressed by the government, in concert with the C.N.T. “officials”.

H.E. Kaminski and Emma Goldman said: “It is not in Madrid or Barcelona where the revolution is made. The revolution is made in the small towns and villages,” a fact commonly known, that Germinal recognized. He and two other members of the Quijotes group went to work as farmers on a village collective in the province of Lerida. There they were able to live the brother-sisterly spirit of the Revolution. As one survivor said fifty years later, “Then we were really one big family!”

In April 1938, the Government’s “Army of Victory,” which replaced the original volunteer columns, was pushed back and defeated by the fascist offensive in Aragon. A new front had to be established in Catalonia. Germinal, with other members of the Quijotes enlisted in a Youth Battalion that joined the 26th Division, formerly the Durruti Column. After being wounded, he returned to Barcelona to recuperate and joined other Quijotes who were keeping the spirit of the group alive. 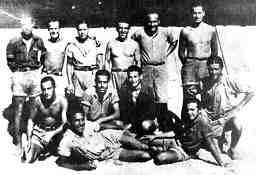 When Catalonia collapsed in the early days of February 1939, half a million refugees crossed the Pyrenees into France where they were interned in concentration camps.

The one in Argeles sur Mer was nothing but bare sand surrounded by wire and had no sanitary facilities or shelter. Makeshift huts that people made with their own blankets were their only protection. For the French, the first priority was to make the barbed-wire enclosures more secure. Under these conditions the group survived with a single blanket to cover the nine members, sleeping crisscross. Although the brotherhood became more and more solid, one member, Jose Gosalves, became ill with an intestinal infection. A single aspirin was the only medication given to him. He was finally taken to a hospital, where he died a few days later, June 2nd. He was 19 years old, the first tragic loss of the group.

Refugees from Argeles were later transferred to another seaside camp, Barcares sur Mer which became a sort of learning centre. Whoever had a book had a very precious treasure, and there was always a long waiting list to read it. Individuals of the group would take turns reading a book aloud to the others and comment on its contents.

The outbreak of World War II in September 1939 and the collapse of the French army in May 1940 created frequent crises for the Spanish refugees who were periodically rounded up and sent to work at fortifications on the Atlantic coast, to work in war factories in Germany or interned in death camps (where over seven thousand Spaniards died). Some managed to join the French underground; others re-crossed the Pyrenees to carry on the fight in Spain.

Germinal, who escaped from a train bound for Germany, survived those years and became active in organizing the underground Spanish Libertarian movement in France and was part of the first national committee of the Libertarian Youth in Exile.

People expected that the liberation of France and the end of the war (May, 1945), would also mean the end of Franco. Underground activities in Spain increased and Germinal returned there. Arrested in 1946, prison became for him “the other university” where he studied English and accounting.

When the United Nations recalled its representatives in Spain, Franco was, temporarily, less severe and Germinal was freed on bail after eighteen months. He then continued the antifascist struggle, helping to publish clandestine issues of “Ruta” and “Tierra y Libertad.”

1948 was a tragic year. The police arrested several comrades and obtained a contact address. An ambush resulted in a confrontation and deaths. On June 26 of that year, Raul Carballeira, another Quijote organizer who was considered a danger to the regime, was surrounded by police. A shoot-out ensued, and after he was wounded, Raul used the last bullet on himself.

General Franco’s government went to great lengths to destroy the underground C.N.T. The most sophisticated methods from Nazi Germany and Fascist Italy were applied. Infiltrations, killings and executions caused a reign of terror. In a period of only three months in 1948, 1,000 militants were arrested. This unrelenting repression against the Libertarian Movement continued until the dictator’s death in November 1975. Such a heavy toll obviously strained and weakened the movement.

At the end of 1948, Germinal returned to France, and from there he went to Venezuela. A new chapter of his life began, a chapter filled with literary achievements, study, travel, creativity. He was gifted with a remarkable memory that enabled him to accumulate a treasure of knowledge. Eager to learn, in 1954 he undertook a journey through the South American continent by car that took him from Venezuela to Colombia, Ecuador, Bolivia, Chile, Argentina, Uruguay and then to Brazil. His romantic quixotic curiosity caused him to immerse himself in the history and geography of this area. His book, America Hoy, published in 1956, describes the struggles and social conditions of these countries.

A year later, 1957, he set out alone to travel around the world. Among the books that appeared: Mexico, Panama y el Oceano Pacifico.

He was in correspondence with notable anarchists, Lu Chien Bo in China and Taiji Yamaga in Japan. During a three month stay in Japan, Yamaga was his host and guide, he gained insights used in the book Japon Hoy. Later came Escarceos Sobre China, El Sudeste Asiatico, Museihushugi, El Anarquismo Japones, and La Sabiduria Oriental.

He also spent time on a kibbutz in Israel. He was a prolific writer. His travel reports appeared in the Spanish press in exile, especially in C.N.T., whose editor, Jose Peirats, nicknamed him “the Marco Polo of Anarchism.”

Back in Venezuela he worked at any job he could. He saved up for about two years and set out with a new travel itinerary, always stopping in France to rejoin and revive old friendships in order to strengthen his own spirit. From 1962 to 1967 he published Ruta, of which sixty issues appeared. After a stay in France and North Africa, a second era of Ruta, based in Caracas, appeared. The project was like a family accomplishment in which his companion Mar y Sol and their children, Maya and Grecia, along with two other comrades helped in the printing process.

In Caracas he found work in the office of a major European airline. This gave him many opportunities to travel. With his early retirement he retained this privilege and spent his summers in the south of France doing research and writing, and his winters in Caracas where, to supplement his income, he worked as an accountant.

There are also numerous booklets, with at least thirty published titles. At the time of his death Germinal had nearly finished a book about the dictatorships in Latin America.

He visited and maintained contact with comrades in many countries, always eager to acquire more knowledge and affirm his commitments to his ideals.

For five centuries, conquistadors, adventurers and treasure hunters have sought El Dorado. We believe that Germinal found the true El Dorado, one very rich in human experiences, knowledge, friendship, esteem. This love for the Ideal of anarchism was engendered in his youth and he dedicated his whole life to it.

Now he, along with the other “Quijotes del Ideal,” is part of the history of the liberation struggle for a better society–an honour willingly bestowed and well deserved. What a gratifying feeling to have been part of it!

The generation of young people who participated in the Spanish revolution is now in their seventies and are gradually fading. They leave behind them more than half a century of struggles that carried their hopes for a better world and they trust that a new generation of Quixotes will carry on. We remain ever mindful that “Humankind must be free and the future belongs to the daring and dreamers.”

“Don’t let anyone be called an anarchist who doesn’t show it through acts of altruism, simplicity and anti-authoritarianism. It is not enough to call yourself an anarchist in order to be one. You must show it.”

For further reading on the Spanish Revolution:

Anarchists in the Spanish Revolution by Jose Peirats – $5

Lessons of the Spanish Revolution by Vernon Richards – $6

Vision on Fire: Emma Goldman on Spain by David Porter – $7.50