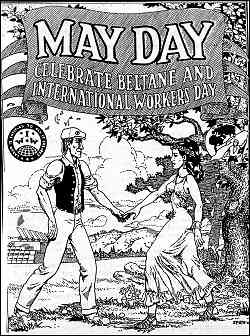 Beltane is the high festival of Spring. Its origins are ancient Celt. In the old times, people celebrated the end of Winter and the turning of the Wheel to the greening of the land with dancing, feasting and lovemaking. They wove the Maypole, decorated themselves with garlands of flowers, looking forward to a new season of growth and abundance. In America, May 1st officially became Law Day to separate it from international May Day celebrations associated with communist nations and radical labor movements. U.S. Labor Day was established almost half a year away and is the occasion for civic, not labor, festivities.

May Day as International Labor Day began in the U.S. to commemorate the May 1, 1886 nation-wide strikes for the then radical demand of an eight hour work day. In Chicago, the police opened fire on strikers, killing six. At a demonstration to protest the slayings, a bomb exploded in the midst of the police, killing eight of them.

In the hysteria that followed, eight anarchist labor organizers were indicted and convicted for conspiracy to murder. Albert Parsons, August Spies, George Engel and Adolph Fischer were hanged by the state of Illinois. In 1889, workers from various countries met in Paris and designated May 1st as an international day of support for labor and to commemorate the four martyrs.