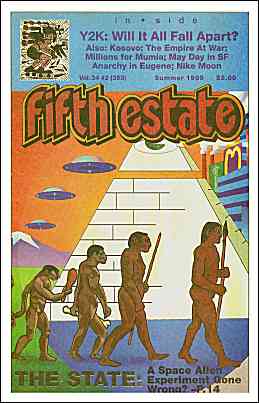 It’s a pleasure to launch our Summer 1999 edition with a rare splash of color on our front page and center section. The other art and photos also provide an excellent setting for a diverse set of articles.

There are probably more people contributing to this issue than we’ve had in a long while. We haven’t had a color front page in six years, but Stephen Good-fellow’s terrific art and the page one photos made it almost a necessity.

This is our second issue this year. Can we actually put out four issues before the millennium? We’re going to try! This Summer edition follows our Winter issue, so librarians and subscribers, please note that you have not missed a number. You last received Vol. 34, No. 1, and this is number two.

This edition, like most, would not have been possible without the generous contributions of our Sustainers, our subscribers who frequently add an extra donation to their renewals, and to those who purchase books through the paper. All of this has allowed for a financial viability which is rare in radical publishing. Thanks to all of you.

The good news for artist Tyree Guyton is that the story of his world-famous folk art on an East-side Detroit street is captured in a documentary that is traveling the country as part of the Ann Arbor Film Festival Tour. The bad news is that on May 12, the city made good on a longstanding threat and tore down the block-long Heidelberg Project art exhibit.

For 13 years, Guyton collected large quantities of “found” junk objects from the trash such as dolls, shoes, bicycles, vacuum cleaners, car hoods, and other material. He hung them on trees and vacant homes, and piled them in the lots of a poor neighborhood in an effort to “find beauty in the ugliness” of urban decay.

Often his surreal outdoor junk exhibits had messages about civil rights and black history. Visitors from as far away as Europe and Asia found the project stunning, but bureaucrats in Detroit’s city hall saw to it the art was cleared away by a small squadron of front loaders and dump trucks. This determined effort was something other neighborhoods plagued by authentic trash problems could envy.

An angry Guyton vows to continue doing his art, even if it consists only of painting his trademark pink and green polka dots on buildings around the city. One hysterical city councilwoman upon hearing of the artist’s intentions declared, “This man is a menace to society.”

Detroit Anti-Racist Action (ARA) is conducting a boycott of a local record store, Rock of Ages, for distributing racist and neo-nazi music and paraphernalia. ARA has held four picket lines at the suburban Garden City store recently, but owner Robert Farsakian, has been unwilling to remove the fascist material, claiming First Amendment rights.

The protests have been successful so far in turning away customers, including even some of the owner’s friends. Like other campaigns, this one will take a while before it succeeds. Anyone interested in future actions, urging music distributors to withdraw their product from the store, or sending letters of disgust, contact Detroit ARA. 1131 W. Warren, Suite 215, Detroit MI 48201; detroitara@hotmail.com.

Now, after selling the firm for close to $1 billion, he’s spending his retirement financing a right-wing Roman Catholic agenda that is heavily slanted against abortion rights.

Monaghan’s latest adventure is the Ave Maria School of Law, which will train students for what Monaghan calls “the 2,000-year-old tradition of Catholic scholarship” and the “enduring truths found in nature.”

Monaghan also funds a right-wing Catholic newspaper, “Credo” (Latin for “I believe”). A recent issue attacked an exhibit of Barbie dolls at the Catholic University of Detroit-Mercy in which students and faculty remade the dolls to represent “real women.” Especially offensive to “Credo” was “Cardinal Barbie” because she was dressed in a priest’s black cassock and wore an oversized crucifix around her neck.

In a printed message, Cardinal Barbie complains of the “crass and uncompromising patriarchy within the hierarchy of the Roman Catholic Church.” Cardinal Barbie says the cross symbolizes “the extra burden women must carry.”

Many auto industry observers in Detroit have started describing William Clay Ford Jr., the new, 41-year-old chairman of the Ford Motor Co., as an “environmentalist.”

The use of that word for a person whose company does much every day to destroy the earth is truly Orwellian, but it reflects an industry trend in which company chiefs try to portray themselves as deeply concerned about the environment while fighting the toughening of clean-air rules and planning even bigger sports utility vehicles. Ford is a rich kid personified. The great-grandson of the original Henry Ford, he is one of those plutocrats who was born on gthird base and believes he hit a triple.

As a way of demonstrating its respect for the biosphere, Ford Motor announced production of the world’s largest sports utility vehicle, the Excursion. This 19-foot, 3.5-ton behemoth will be two feet longer than such industrial-sized gas guzzlers as the oversized Expedition and Navigator, and get 10 miles to the gallon.

In a repeat of the London Women in Black story reported by Cynthia Cockburn on Page 7 of this issue, a number of us from this newspaper had a similar experience attending a leftist sponsored anti-NATO demo.

The April 10 protest, at the Detroit-Windsor Tunnel was called by the International Action Center, a national front group of the Workers World Party.

When we arrived, we were dismayed to find picketers displaying a profusion of Serb flags, religious iconography, target t-shirts and signs supporting Serbian domination of Kosovo. One of our group began shouting, “Down with NATO; down with Milosevic.” which seemed to disturb the Serbs present, but they didn’t do anything.

However, this sent a couple of Workers World hacks into a frenzy, who shouted at us that we were “apologists for NATO,” and told us to leave if we didn’t like their single slogan protest. We defended our right to say what we liked and to march in a public demonstration, but the head aparatchik turned up his bullhorn full blast causing feedback, and rammed it into the face of one of our friends.

That was enough; we left these authoritarian marxist-leninists to the apologists for ethnic cleansing.

In contrast to what Cynthia Cockburn writes in her article, that the London leftists may have simply been trying to present a complex issue in simple terms, crass opportunism seems a more probable answer.

The raison d’etre for all leftist cults is to recruit members even if it means, as in this case, lining up physically with those who deny the pogromist nature of their twisted nationalism.