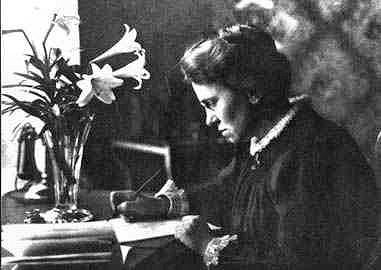 “If I can’t dance, I don’t want to be in your revolution,” said Emma Goldman (1869-1940), feminist heroine, anarchist activist, editor, writer, teacher, jailbird, and general troublemaker. Or did she?

In fact, though the sentiment is indeed Emma Goldman’s, one she frequently pronounced and acted upon, she wrote none of the above, notwithstanding that each of these versions and more has been attributed to her on buttons, posters, banners, T-shirts, bumper stickers, and in books and articles, for nearly twenty years.

Here, rather, is what she did say, in her 1931 autobiography Living My Life:

“At the dances I was one of the most untiring and gayest. One evening a cousin of Sasha [Alexander Berkman], a young boy, took me aside. With a grave face, as if he were about to announce the death of a dear comrade, he whispered to me that it did not behoove an agitator to dance. Certainly not with such reckless abandon, anyway. It was undignified for one who was on the way to become a force in the anarchist movement. My frivolity would only hurt the Cause.

“I grew furious at the impudent interference of the boy. I told him to mind his own business, I was tired of having the Cause constantly thrown into my face. I did not believe that a Cause which stood for a beautiful ideal, for anarchism, for release and freedom from conventions and prejudice, should demand the denial of life and joy. I insisted that our Cause could not expect me to become a nun and that the movement should not be turned into a cloister. If it meant that, I did not want it.

As I may, inadvertently and indirectly, bear some responsibility for the extrapolation from authentic text to familiar paraphrase, I would like to confess and set the record straight. Here is what happened. Sometime early in 1973, I received a phone call from one Jack Frager, an old-time anarchist who worked in the anarchist center at 339 Lafayette Street in Lower Manhattan—a building where to this day various radical groups, including anarchists and the War Resisters League, have their offices. Like many dedicated radicals of the era before desktop publishing, he was a printer; now he had the original idea to raise funds for the Cause by printing up a batch of Emma Goldman T-shirts to hawk in Central Park at the huge upcoming festival celebrating the end of the Vietnam War.

Having heard me lecture to the anarchists on Emma’s feminism (after decades of obscurity during which all of her works were out of print, Emma was suddenly returning to the public eye as a hero of women’s liberation), Jack was phoning to solicit my help.

I had recently published two books on Emma: a biography and a collection of her essays, both of which contained photos of her. He wondered if I might lend him a glossy photo from which to print, and also asked me to suggest a phrase or slogan from Emma’s writings suitable for emblazoning on T-shirts.

Delighted by the opportunity to publicize Emma’s feminist side, particularly among followers sometimes reluctant to share her with any movement not strictly anarchist, I offered him a glossy shot of a stalwart, hatless Emma in a pince-nez and referred him to several prose passages, particularly the dancing episode, which seemed to me to embody her most lively feminist spirit. Did I propose Emma’s statement about “freedom, the right to self-expression, everybody’s right to beautiful radiant things”? Perhaps.

In gratitude, Jack promised me all the T-shirts I wanted, at cost. Several days later, when I picked up my shirts along with my precious glossy, I was surprised to find a succinct abridgement of Emma’s dance story spread boldly across the shirt—the first (and most common) version of the now-famous slogan: “If I can’t dance, I don’t want to be in your revolution.”

I searched Emma’s texts for the statement; it was nowhere to be found. But Jack was so pleased, the festival was so soon, Emma looked so lively printed in red and black on a variety of rich background colors, that I hadn’t the heart to register an objection in the name of scholarship. After all, the apocrypha appeared on a mere gross or two of T-shirts, which surely could not require the same standards of accuracy as, say, book blurbs extracted from book reviews—and the sentiment expressed was pure Emma indeed.

But history (and fashion) exploded so quickly in those hungrily feminist days that the slogan on the original shirt run was soon dispersed and copied and broadcast nationwide and abroad, underground and above, sometimes, absent a text to be checked against, changing along the way like a child’s game of Telephone, until Jack’s initial lighthearted liberties had taken wing as quotable lore and soared up into the realm of myth.

When all my shirts from the original batch had been given away to friends and my own worn to a rag, I decided to buy another. Only the new shirt, purchased in an uptown bookstore, sported a different picture of Emma—this time in a floppy hat—and a different version of the by now legendary legend, different still from the one I sometimes flaunt on a button. But, hey, if you can’t wear what you like, who wants to be in your revolution?

Related in this issue