The Spectre of Terrorism Haunts the World

THE SPECTRE OF TERRORISM HAUNTS THE WORLD

CAUTION! There are terrorists among us. 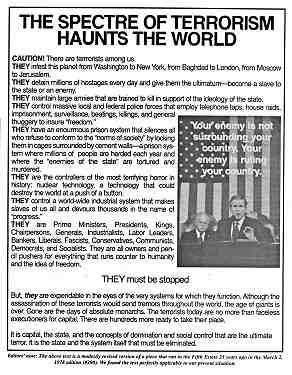 THEY infest this planet from Washington to New York, from Baghdad to London, from Moscow to Jerusalem.

THEY detain millions of hostages every day and give them the ultimatum—become a slave to the state or an enemy.

THEY maintain large armies that are trained to kill in support of the ideology of the state. THEY control massive local and federal police forces that employ telephone taps, house raids, imprisonment, surveillance, beatings, killings, and general thuggery to insure “freedom.”

THEY have an enormous prison system that silences all who refuse to conform to the “norms of society” by locking them in cages surrounded by cement walls—a prison system where millions of people are herded each year and where the “enemies of the state” are tortured and murdered.

THEY are the controllers of the most terrifying horror in history: nuclear technology, a technology that could destroy the world at a push of a button.

THEY control a world-wide industrial system that makes slaves of us all and devours thousands in the name of “progress.”

THEY are Prime Ministers, Presidents, Kings, Chairpersons, Generals, Industrialists, Labor Leaders, Bankers, Liberals, Fascists, Conservatives, Communists, Democrats, and Socialists. They are all owners and pencil pushers for everything that runs counter to humanity and the idea of freedom.

THEY must be stopped

But, they are expendable in the eyes of the very systems for which they function. Although the assassination of these terrorists would send tremors throughout the world, the age of giants is over. Gone are the days of absolute monarchs. The terrorists today are no more than faceless executioners for capital. There are hundreds more ready to take their place.

It is capital, the state, and the concepts of domination and social control that are the ultimate terror. It is the state and the system itself that must be eliminated.

Editor’s note: The above text is a modestly revised version of a piece that ran in the Fifth Estate 25 years ago in the March 2, 1978 edition (#290). We found the text perfectly applicable to our present situation.