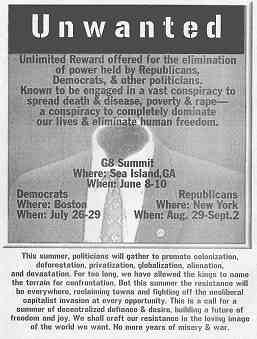 Unlimited Reward offered for the elimination of power held by Republicans, Democrats, & other politicians.

Known to be engaged in a vast conspiracy to spread death & disease, poverty & rape—a conspiracy to completely dominate our lives & eliminate human freedom.

This summer, politicians will gather to promote colonization, deforestation, privatization, globalization, alienation, and devastation. For too long, we have allowed the kings to name the terrain for confrontation. But this summer the resistance will be everywhere, reclaiming towns and fighting off the neoliberal capitalist invasion at every opportunity. This is a call for a summer of decentralized defiance & desire, building a future of freedom and joy. We shall craft our resistance in the loving image of the world we want. No more years of misery & war.