The IWW: 100 Years of Resistance and Repression 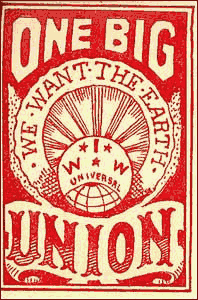 By the last half of the nineteenth century, working conditions in American factories, mines, and mills were deplorable. Industrialists were ruthless about making money at the expense of the health and safety of the workers. They looked upon their employees as less than human.

No labor laws existed to protect the men, women and children who poured into northern industrial centers. The cheapest of laborers were the freed slaves from the South and poor immigrants from all over Europe, escaping famines, devastating wars, and repressive regimes. Slavery was officially outlawed in the United States, but the treatment of black people was little different than before the Emancipation Proclamation.

Disease-ridden slums made up of sub-standard tenements with no sanitation did not make their home lives any easier than their work lives. Mining towns were similar. Immigrants from Europe hoping to find a better way of life found instead that conditions were as dire as those they had left behind.

In addition to poverty-level wages, dangerous machinery, sub-standard and unsanitary sweatshops, and indifferent and cruel bosses who would often lock workers inside, exceedingly long hours were imposed on workers of all ages. Six-day work weeks of 12 to 14 hours each were not uncommon. Any act of resistance on the part of the workers was usually met with government violence.

As a reaction to this state of affairs, a meeting of anarchists, socialists, and trade unionists convened in Chicago on June 27, 1905 to form the Industrial Workers of the World (IWW). Among the nearly 200 assembled radicals were the leader of the Socialist Party, Eugene V. Debs, anarchist priest and editor of Voice of Labor, Fr. Thomas J. Hagerty, editor of the United Brewery Workers German-language paper Brauer Zeitgung, William Trautmann, well-known labor activist Mother Jones, Western Federation of Miners President William D. (“Big Bill”) Haywood, Socialist Labor Party leader Daniel De Leon, and Lucy Parsons, anarchist and widow of Haymarket martyr Albert Parsons, as well as members of the International Working People’s Association. They convened to expressly “do away with capitalism.”

Presiding over the meeting was Haywood, a large and powerful presence. He began with this statement:

“Fellow Workers, this is the Continental Congress of the Working Class. We are here to confederate the workers of this country into a working-class movement in possession of the economic powers, the means of life, in control of the machinery of production and distribution without regard to capitalist masters.”

The delegates present agreed on the need to organize all workers into One Big Union, regardless of skill or trade, race or gender. This concept was in complete opposition to the American Federation of Labor’s craft unionism in which only skilled tradesmen were allowed membership. In fact, the formation of the IWW was a direct response to the AFL’s exclusionary policies. The elitist AFL (referred to disparagingly by the Wobblies as the “American Separation of Labor”) would only organize skilled trade workers, thereby excluding blacks, hobos, immigrants, itinerant workers, and women. In addition, the IWW vowed to abolish the wage system, and allow the workers to take control of industry at the point of production. AFL leader Samuel Gompers tried to persuade and intimidate local AFL members from attending the Chicago convention, and never gave up his fight against the IWW.

The delegates mostly agreed upon the wording for a Preamble (which underwent two changes, one in 1908 and one in 1992), which still stands as the official manifesto of the IWW. However, there was serious conflict among the founders about one clause, relating to the tactics used to bring about the end of capitalism. One faction, consisting mainly of anarchists, was against political activity of any kind, viewing direct action such as strikes and sabotage as more potent tools.

They, like many anarchists of that time, had been radicalized by the Haymarket affair, and were inspired by the courage of the activists who sacrificed their lives for working men and women.

The delegates from the Socialist Party and the Socialist Labor Party subscribed to political activity (ballots, elections, and labor contracts). Many of them having also witnessed the Haymarket incident, saw what can happen to militant labor agitators, and were not willing to make the same sacrifice. Without reaching a satisfactory compromise, there was a split in the IWW by 1908, with Daniel De Leon of the Socialist Labor Party leaving to form the Workers’ International Industrial Union in Detroit. That group never gained the recognition and reputation the IWW did and dissolved by 1915. The direct-actionists gained control of the IWW, and due to their fearlessness and legendary militant activities, the labor movement was never the same.

The IWW members, with their anarcho-syndicalist ideals and direct action tactics of sit-down strikes, general strikes, walkouts, and sabotage, were a thorn in the side of employers, police, government officials, and all capitalists. They rejected labor contracts, believing those hinder spontaneous actions and “sympathy” strikes and could corrupt union leaders given power to negotiate with employers on behalf of workers. This revolutionary union was a threat to the status quo and had proved on several occasions its strength and determination.

Most Wobblies, occupying the lowest rung of the class structure, hadn’t much to lose, so threatening them with jail or unemployment was not an effective approach. So great was their threat, however, that many suffered much worse, such as severe beatings, torture and death, for their activities. By 1907, there were already a number of heated strikes in mines and textile and lumber mills as well as frame-ups of several IWW leaders. ‘Their enemies were powerful and ruthless. Thugs and vigilantes were hired to break strikes, kidnap and beat IWW leaders and sympathizers, and attack members in their homes or union halls. Over the next few years, numerous strikes took place, including the legendary and successful 1912 Bread and Roses strike at Lawrence, Massachusetts, in which 25,000 workers took part.

Various stories surround the origins of their nickname, “Wobblies.” The most likely refers to the large numbers of Chinese immigrants in the U.S. during the union’s first few decades, whose pronunciation of the “w” in IWW came out as “eye-wobble-wobble.” The organization’s ability to appeal to immigrants attracted members other unions could not or would not reach out to. Today, all IWW members are known as Wobblies or Wobs. Their greeting of solidarity to each other is “Fellow Worker.”

In addition to their radical ideas and militant tactics, the Wobblies are renown for their imagination and creativity as writers, poets, singers, and artists. Their wisecracking, inventive, and catchy irreverence gave way to some of the most widely sung labor songs in history. Many religious hymns were appropriated by the atheistic Wobs and new, mocking, anti-boss and anti-preacher words replaced the church’s version. Many people are attracted to the union through its music, art, and merriment.

Their Little Red Song Books, containing many songs by the IWW’s most famous member, Joe Hill, have been a staple on picket lines and at demonstrations throughout the last century. These songs help create a genuine feeling of solidarity in their company.

Trains and hobos also figure prominently in Wobbly culture. Through the 1930s, trains were the most common form of long-distance transportation. Hobos had their own language and subculture and were traditionally impossible to organize. They were perceived as outsiders and usually preferred that status. However, they could be counted on in a pinch, to hop freights, converge on a city or town where there was a fight for free speech or a strike, and turn the tables against the bosses and police. Alone, they were sitting ducks, subjected to various abuses on and off the job, but together they made up a formidable force in the IWW movement.

Some derogatory nicknames for IWW members, such as “I Won’t Work,” “I Want Whiskey,” or “Irresponsible Wholesale Wreckers,” have been used to turn public opinion and potential employers against them, although most IWWs did not deny the monikers. Wobblies played the same name game, sometimes referring to themselves as “International Wonder Workers.” “I Will Win” was another twist they used on the acronym. One of the most common errors in referring to the union is as “International Workers of the World.”

The IWW fought grueling strikes and faced fierce and ultimately debilitating government repression during its early years. Although diminished significantly, the union fought on during the succeeding decades waging battles for workers in mining, lumber, and early auto organizing. In the midst of the post-World War II anti-communist hysteria, the IWW was put on the U.S. Attorney General’s List of Subversive Organizations in 1949 and by the time of its 50th anniversary, the union was almost extinct.

There was some activity in the union from 1950 until the late-1960s which kept it alive. Then, a revival began to take place in university towns in the Midwest and several organizing drives were waged around the country throughout the 1970s and 1980s. The union’s focus since then has been in the natural food, commercial, service, retail recycling, and construction industries as well as non-profit organizations. Politically the union has strongly supported the environmental, antiwar, and other progressive movements for social change. There are currently branches in 25 states in the U.S., plus ones in Australia, Canada, Germany, Great Britain, and Japan. With 1,500 dues paying members, they represent eleven industries, including lumber, marine transport, construction, clothing, motor transport, communications, education, public interest, restaurant, hotel and building service, utility service, and distribution. Their General Headquarters, located in Chicago for 86 years, is now in Philadelphia.

The year 2005 does not simply mark an anniversary of an old labor union. The IWW is a living, functioning organization, with contemporary struggles and dreams of a better world. It may have experienced its heyday over 80 years ago, but it has never died. The ideals and hopes of Wobblies live on, and the famous people who make up its history, as well as the thousands of rank-and-file unknowns are not just remarkable characters; they serve as inspiration to working class people everywhere.

FE note: Our thanks to the University of Michigan Labadie Collection’s curator, Julie Herrada, for the IWW history above. The text also appears in an expanded version as a brochure accompanying the archive’s IWW centenary exhibit. Many of the graphics on these pages are part of the display, as well.

The exhibit runs through Nov. 26 at the Labadie in Ann Arbor. Full details are on page 55.