Society of the Spectacle, 40th anniversary 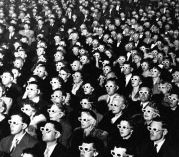 The Society of the Spectacle (La Société du Spectacle), by Guy Debord, is the best-known and most influential text issued by the Situationist international (SI), and it informed–theoretically and practically–the most revolutionary sectors that emerged a year after its publication in Paris during the massive French uprising of May-June 1968.

Departing from Marx, Debord moves from the analysis and critique of production to give priority to consumption. ‘The commodity, Debord posits, is a reified thing that mediates all social relations and activity to the point where genuine human experience is turned on itself, becoming merely an image, an “accumulation of spectacles.” Through the spectacle, genuine social life is now represented back to itself rather than being lived directly.

La Société du Spectacle was first published in French in 1967 by Editions Buchet-Chastel and later picked up by Champ Libre in 1971.

Fredy and Lorraine Perlman translated the first English edition in 1970, self-publishing it at the Detroit Print Co-op under the Black and Red imprint and revised it in 1977. It is available with other titles at blackandred.org. A second translation was done in 1994 by Donald Nicholson-Smith, a member of the British section of the SI. The most recent version (2001) was done by Ken Knabb of the Bureau of Public Secrets. Knabb’s other SI translations are at bopsecrets.org.

The following excerpts of The Society of the Spectacle are taken from the 1977 Black and Red translation. All three translations are excellent and convey the precise sense of the text, as well as its subtle nuances, in their own unique ways.

The original French version of La Société du Spectacle and subsequent translations are available online and can he found by a quick Google search. The Situationists never copyrighted their texts and encouraged the free distribution of them. Additionally, none of the three translations are under copyright.

1. In societies where modern conditions of production prevail, all of life presents itself as an immense accumulation of spectacles. Everything that was directly lived has moved away into a representation.

2. The images detached from every aspect of life fuse in a common stream in which the unity of this life can no longer be reestablished. Reality considered partially unfolds, in its own general unity, as a pseudo-world apart, an object of mere contemplation. The specialization of images of the world is completed in the world of the autonomous image, where the liar has lied to himself. The spectacle in general, as the concrete inversion of life, is the autonomous movement of the non-living.

3. The spectacle presents itself simultaneously as all of society, as part of society, and as instrument of unification. As a part of society it is specifically the sector which concentrates all gazing and all consciousness. Due to the very fact that this sector is separate, it is the common ground of the deceived gaze and of false consciousness, and the unification it achieves is nothing but an official language of generalized separation.

4. The spectacle is not a collection of images, but a social relation among people, mediated by images.

6. The spectacle grasped in its totality is both the result and the project of the existing mode of production. It is not a supplement to the real world, an additional decoration. It is the heart of the unrealism of the real society. In all its specific forms, as information or propaganda, as advertisement or direct entertainment consumption, the spectacle is the present model of socially dominant life.

It is the omnipresent affirmation of the choice already made in production and its corollary consumption. The spectacle’s form and content are identically the total justification of the existing system’s conditions and goals. The spectacle is also the permanent presence of this justification, since it occupies the main part of the time lived outside of modern production.

18. Where the real world changes into simple images, the simple images become real beings and effective motivations of hypnotic behavior. The spectacle, as a tendency to make one see the world by means of various specialized mediations (it can no longer be grasped directly), naturally finds vision to be the privileged human sense which the sense of touch was for other epochs; the most abstract, the most mystifiable sense corresponds to the generalized abstraction of present-day society.

23. The oldest social specialization, the specialization of power, is at the root of the spectacle. The spectacle is thus a specialized activity which speaks for all the others. It is the diplomatic representation of hierarchic society to itself, where all other expression is banned. Here, the most modern is also the most archaic.

24. The spectacle is the existing order’s uninterrupted discourse about itself, its laudatory monologue. It is the self-portrait of power in the epoch of its totalitarian management of the conditions of existence. The fetishistic, purely objective appearance of spectacular relations conceals the fact that they are relations among men and classes: a second nature with its fatal laws seems to dominate our environment. But the spectacle is not the necessary product of technical development seen as a natural development.

The society of the spectacle is on the contrary, the form which chooses its own technical content. If the spectacle, taken in the limited sense of “mass media” which are its most glaring superficial manifestation, seems to invade society as mere equipment, this equipment is in no way neutral but is the very means suited to its total self-movement.

If the social needs of the epoch in which such techniques are developed can only be satisfied through their mediation, if the administration of this society and all contact among men can no longer take place except through the intermediary of this power of instantaneous communication, it is because this “communication” is essentially unilateral.

The concentration of “communication” is thus an accumulation, in the hands of the existing system’s administration, of the means which allow it to carry on this particular administration. The generalized cleavage of the spectacle is inseparable from the modern State, namely from the general form of cleavage within society, the product of the division of social labor and the organ of class domination….

Note. The Revised and Expanded Edition of the Situationist International Anthology is now available.

The SI Anthology presents a rich variety of articles, leaflets, graffiti and internal documents by Guy Debord, Raoul Vaneigem, etc., ranging from their early experiments in “psychogeography” and cultural subversion to their lucid analyses of the Watts riot, the Vietnam War, the Prague Spring, the Chinese Cultural Revolution, the May 1968 revolt in France, and other crises and upheavals of the ‘sixties.

For this new edition, translator Ken Knabb has fine-tuned all of his original translations and added over 100 pages of new material. For more information, see http://www.bopsecrets.org/cat.htm