RNC: Shut It Down!

Welcoming the Republicans to the Twin Cities

The 2008 Republican National Convention (RNC) will descend on Minneapolis-St. Paul, September 1 through 4, as the opening act in the pacifying spectacle of the coming presidential election. The most direct way to oppose a dog-and-pony show is just to stop it. 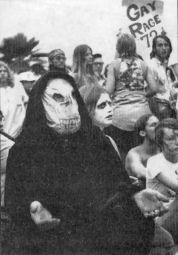 This convention of the rich, the white, and the conservative, is a self-congratulatory event intended as the opening shot in the attempt to convince the hapless voter that John McSame represents patriotism, experience, and “our” values, rather than war, empire, economic royalism, and the rest of the miserabilism known as America. Stopping the convention won’t stop the election, but it will disrupt their spectacle and prove that we have the power to shape our own communities and future.

In this spirit, anarchists and anti-authoritarians from across the US gathered in Minnesota’s Twin Cities last fall to discuss the convention and hash out a framework for resistance. Local anarchists (calling themselves the RNC Welcoming Committee) have been meeting since the convention site was announced for St. Paul, and autonomous cells have popped up around the country under the banner of Unconventional Action.

Through a process of consensus in the main strategizing session and the action breakout that followed, attendees developed a three-tiered strategy for denying delegates access to the RNC on opening day.

Here’s the way it will break down:

Tier One: Establish 15 to 20 blockades, utilizing a diversity of tactics, creating an inner and outer ring around St. Paul’s Xcel Center, where the RNC is to take place.

Tier Two: Immobilize the delegates’ transportation infrastructure, including the buses that are to convey them.

Calling for blockades sets a radical tone for the day without dictating the forms of resistance that people engage in. Anything from a lockdown, to a pile of gathered materials, to a yoga bloc in an intersection, to a good, old-fashioned traffic jam, helps create the desired effect, and the more diverse the actions, the less likely the cops will be prepared to deal with them.

Last summer’s G8 protest in Germany created a change in the landscape of our organizing. Dissent! and Block GS were able to mobilize huge amounts of people because of the open and participatory manner in which it was organized.

The blockading strategy provides ways for large numbers of people who would likely be excluded from other strategies to plug in through large, effective, accessible actions that bring people closer to their comfort level and provide clear avenues of participation for folks who aren’t experienced or aren’t already a part of strong militant networks.

Simultaneously, there is ample room for small affinity groups with the capacity to plan and execute their own actions to do so. The blockading framework creates a way for all of these actions to complement each other, resulting in an output greater than the sum of its parts.

Not everyone is into blockading, so fortunately there are a lot of other effective tactics. More mobile and offensive sorts, for example, are difficult to do well in spaces where large numbers of cops have easy access to sites of potential interest and there is little else going on to hold their attention. Successful execution of the blockading strategy, however, will actually create spaces more conducive to other tactics than we would otherwise see.

How to Plug In:

At the recent national anti-RNC spokescouncil over Mayday weekend, the scenario of Tier One was further developed into what has been dubbed, “Swarm, Seize, Stay.” “Swarm, Seize, Stay” is a simple mantra for September 1, and a big picture to direct all of our collective energies towards. Basically, 3S means:

3. Stay engaged with the situation in downtown St. Paul as long as necessary.

You may move from location to location, but don’t jump ship and bear in mind the ultimate goal of denying access to as many people entering the Xcel Energy Center as possible.

To facilitate the blockades, downtown St. Paul is being broken up into sectors. Each sector will then be taken by groups with some affinity with one another in order to coordinate street-level details. This will ensure that all potential points of access are covered and that complementary tactics will be utilized in close geographic proximity to each other.

Those plugging into this strategy are free to shape their actions as they see fit, using the tactics they consider appropriate. Get your comrades together, discuss your capabilities, look over maps, and start thinking about which sites you might -be interested in. Network with others to form a cluster or call for a certain type of swarm. It will soon be time for groups to plug into a sector and adopt specific areas, intersections, streets, on-ramps, or bridges.

Keep your eyes on www.nornc.org

for strategy updates, housing and rideshare boards, as well as lots of other important information.

See you in the streets!

Twin Cities 2008 RNC is begging to be blockaded!

The geography of the 2008 RNC lends itself quite readily to a blockading strategy. Unlike conventions of past years, this one is being held in a city without the capacity to sustain it alone. St. Paul, especially its downtown, is simply not big enough.

Thus, convention-related events are happening all over the Twin Cities metro area, bringing Minneapolis into the fold. Between Minneapolis and St. Paul, there are still not enough hotel rooms to house the thousands of conventioneers who’ll be descending on our cities for four days.

So, delegates, media, staff and extras will be housed throughout the Twin Cities metro area requiring all of them to be transported to and from their hotels en masse (mostly on several hundred city buses contracted specifically for that purpose).

Thanks to the mighty Mississippi River, they’ll mostly have to be funneled across a small number of bridges, and because of the car culture in which we live, they will only have a limited number of entrances to downtown St. Paul from which to choose.

Few conventions have presented such clear transportation vulnerabilities, and we would be foolish to pass up the opportunities they present.

The 2008 RNC is begging to be blockaded.

The RNC Welcoming Committee has committed to facilitating the protests, including housing, food, transportation (within the cities), legal support, medical care, media infrastructure, and communications.

We need your help! Organize locally, but be in touch if you can be involved in any of these ways.