Shoplifting and the Politics of Instant Gratification

Are individual acts of transgression rebellion?

Lots of anarchists and other radicals shoplift on a regular basis. But the public discussion on the topic seems to oscillate between celebration and denunciation, with almost nothing in between.

On one side you’ve got CrimethInc and Yomango saying shoplifting is authentic resistance. As an anonymous author wrote in CrimethInc’s Days of War, Nights of Love, shoplifting is “the most effective protest” against the worst features of modern capitalism “because it is not merely theoretical–it is practical, it involves action.” Yomango is a European shoplifting community founded in Spain in 2002, whose name in Spanish translates to, “I steal.” 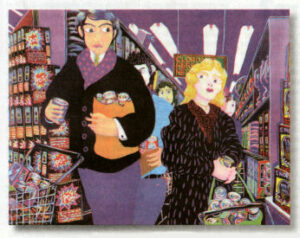 On the other side, critics denounce these views as the voice of white middle-class entitlement. Butch Lee, in a fire-spitting review of CrimethInc’s book published at kersplebedeb.com, wrote that “only super-privileged people talk this phony way, folks sitting on top of the rest of the human race, but playing at being someone else.”

The moral tenor of these arguments is a problem because it stifles any further thought into the matter. There are exceptions, especially works like Abbie Hoffman’s Steal This Book, the zines of Iggy Scam, and Nigel Davis’s Evasion, which focus on the how-to or the adventure of stealing. But even these leave me wondering just what role shoplifting plays in the lives of ordinary radicals who do it regularly, year after year. So I raised the question in my circle of friends and scattered email messages to the digital winds, requesting contact with anyone who was both a political activist and a thief.

The first thing I noticed was how few of the shoplifters who answered believed they were hurting capitalism by slipping cans of cat food or vegan meats into their backpacks at the chain store of their choice. I expected a response more in line with the Crimethinc/ Yomango position. But the politically minded thieves of today seem to conceive of their activity in more humble terms.

It’s a way to procure resources for the local Food Not Bombs.

For the most part, it’s a way to procure food to eat, clothes to wear, and resources for the local infoshop or Food Not Bombs chapter. They might take a devilish joy in stealing beyond their means, snagging an overpriced studded belt from a super-hip Hot Topic store or a box of organic berries from Whole Foods, but, in general, they don’t believe that stealing changes the world or emancipates its people.

Why do they keep doing it, then, even when they attain something close to middle-class status? M., a labor organizer and graduate student who spoke under the condition of anonymity, wasn’t sure himself. He certainly doesn’t believe he’s effectively attacking the corporations he steals from.

“I’ve stolen more than anyone I know,” he said. “I’ve probably stolen more than $10,000 worth of food in the past five years, most of it from Key Foods, and I don’t think I’ve put a dent in their profits.”

Nor does M. need to shoplift to survive. He owns his apartment and is “by no means working class.” He criticizes the arguments that justify stealing, which he says emerge from an “everything-should-be-free sort of entitlement attitude.” And, he distinguishes shoplifting from proper civil disobedience, which is “taking credit for doing something wrong,” while theft “doesn’t call attention to
the problem. You’re just circumventing that for your own benefit.”

If M. is against stealing on every rational level, why does he continue to do it? Maybe it has to do with the rush, he says, or with his indignation at how expensive things are, or with habits that date back to his years in radical environmentalist groups, where he used lawbreaking to prove his daring and political passion.

M.’s story suggests that our decision to obey the law or break it when we’re in a store–one of the places where we interact most directly with capitalism–may sometimes have more to do with the cravings of the body and the emotional parts of the mind than with any ideological belief in the usual sense.

Other cases pointed in similar directions. R. acquired her shoplifting habit while squatting in London, where she would sometimes leave the things she stole on the street for others, so that her disobedience would not be for purely selfish reasons.

Today, she splits her time between holding a straight job and working for a radical publisher, and steals only on occasion. She feels a pang of “middle-class guilt” when she does, yet she still nicks an overpriced bag of coffee every once in a while, especially during times when the brutality of the state becomes glaring, such as the Republican National Convention in 2004. “It’s like a compulsion,” she told me. “I just surprise myself sometimes. It’s some other state of mind, an irrational anger at the system.”

Even those who saw their stealing from a very different perspective gave emotional reasons for engaging in it. Paxus Calta is an anti-nuclear power campaigner who also teaches workshops on “honest seduction” and other elements of personal politics. Unlike some of the other people I spoke with, Paxus sees shoplifting as somewhat useful in cultivating a radical life.

“I do it for lots of reasons,” he wrote in an email. “At the top of my personal list is staying in practice being criminal–remaining cool while committing a small crime.” He acknowledged that shoplifting in itself is not an effective way to confront capitalism, but pointed out that “if done right, it gets people challenging property relations in their minds and hearts.”

But Paxus also emphasized irrational elements in his shoplifting. While it comes “in part from a reasoned place,” he wrote, that there is also “a childish thrill in it,” a feeling of wildness that is crucial to his conception of anarchy.

For each of these individuals, stealing provides an outlet for some of the most primary radical emotions: childish pleasure, impulsive rebellion against unjust authority, and the euphoria of disobedience. All three of our shoplifters acknowledge that it does not add up to effective anti-capitalist resistance. All three say they find other forms of action more politically interesting: M. mentioned labor organizing, R. mentioned sustainable gardening, and Paxus mentioned smuggling, nonviolent civil disobedience, revealing state secrets, and property destruction to advance political agendas.

But there’s an obvious difference between shoplifting and these other tactics. They take rigorous organization and lots of time. Some involve building trusted networks. Some entail serious risk of imprisonment, especially in this era of Green Scare repression.

These are tactics of delayed gratification. And, while they are absolutely crucial to any program for change, perhaps there is room for another, supplementary space, a politics of instant gratification that might give activists more places to direct their spontaneous energy.

If shoplifting satisfies some crucial lust in the radical heart, how can we take that passion–spontaneous, impulsive, even irresponsible–and project it on to other kinds of projects in addition to individualized stealing? I imagine cat-burglar raids on the Exxon Mobil headquarters, spontaneous sit-ins at the offices of temp labor centers or university chancellors, or antiwar protests in Greyhound Bus stations.

These actions should be as spontaneous as possible and just dangerous enough to give you a rush. Imagine the impulses that bring you to steal, and ask yourself if there’s any other way you might gratify them.

This is a call for more improvisational political possibilities, and just as musical improvisation usually depends on practice, political improvisation would require some initial network building. The simplest example I can think of are the text message networks that allow Critical Mass bike rides to split up at the sight of police, then re-integrate twenty minutes later in a completely unplanned location.

It would take work to provide these spaces, but radicals would probably appreciate it. After engaging in the politics of delayed gratification all day, many of them are looking for a quick and easy outlet for their discontent. It won’t bring down the status quo on its own, but increased impulsive and emotional possibilities might help make the arena of resistance more vibrant, satisfying, and ecstatic.