In the spirit of Eugene V. Debs 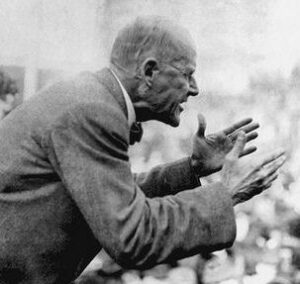 for all the blue proletariat

and struck fiercely against the

to all colors of tears and as

as the Anglo-Saxon monster Grendel!

Strike like a prairie grass fire by the light of the Morning Star at dawn, or

Strike like a heat wave by the light of the scorching sun at noon, or

Strike like a hurricane by the reflective light of the full moon at midnight,

But strike, as passionately as you love to make love.

Photo caption: Labor leader Eugene V. Debs giving his famous 1918 anti-war speech in Canton, Ohio, for which he spent two and a half years in federal prison.