A Detroit Diggers Society has materialized in the Warren-Forest area and is in the process of being “organized” by two neighborhood hippies, Dan Vincent and Cindy Lee. Organization to the Diggers means getting a place to operate out of, scrounging up rent money and donations of money, food, clothing, and housing, all to be distributed freely among the people of the community. 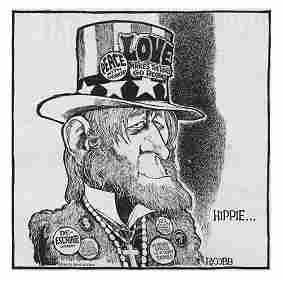 The Diggers movement in its contemporary manifestation originated in the Haight-Ashbury community of San Francisco and has spread to Los Angeles, New York City, Toronto, Seattle, and in other urban centers.

Taking the seventeenth-century English anarchist community action group of the same name as its model, the modern Diggers are committed to overthrowing the tyranny of the dollar by making necessities like food, clothing, music and other art available to people on an entirely noncommercial basis.

The Detroit Diggers Society plans to organize people to provide free mind-expanding concerts, housing for the evicted and wanderers, food for empty stomachs, clothing and a free store, handbills to get the news out, and a program which would “unite soul people, hippies, students, and the human element,” according to their first leaflet. Vincent told the Fifth Estate that he is especially concerned with getting hippies and black people together in street and parks concerts and other happenings so all will see how much they have in common.

In San Francisco the Diggers have provided free food in the Panhandle every afternoon for a year, promoted free dances and concerts in the parks, run two free stores (one in the Fillmore black ghetto sector, one in the Haight), published (through the Communication Company, a member of the UPS) what amounted to a daily mimeographed newspaper for a stretch of months, issued mind-blowing statements, “manifestos,’ and pronouncements meant to turn people on to their own surroundings and possibilities. But their spirit, as evidenced in their actions and in their presence alone, has been the major contribution of the Diggers; they have made it known by example that the so-called American Way (greed and exploitation on all fronts) is not at all the only way things can happen.

The Detroit Diggers want to get as many people together as possible. Anyone who is interested in working on any or all Digger projects, anyone who can provide donations of money, food, clothing, housing (including places for visitors passing through Detroit to stay overnight) or anything else that might be of use to other people can contact Dan Vincent at 5855 4th St. (off Antoinette just north of the Edsel Ford freeway) or leave word at Trans-Love (833-3166), the Fifth Estate (831-6800), or at the Anarchists Workshop (4857 John Lodge).

The Diggers will be using the former Artists’ Workshop building there as their headquarters untilmore permanent arrangements can he made.