An Elegy for Malachi Ritscher

by Jacob A. Bennett 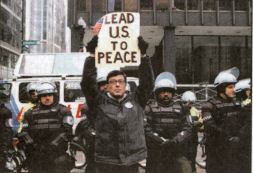 wrote his own obituary. “Reportedly,”

he says, “his last words were

but what he means

is that he lived his life

a quick burst of bloom and

before the pink things wilt away,

falling to the fiery asphalt

underfoot and nothing left of

November when he died.

by flame, he made it

On November 3, 2006, anti-war protester and Chicago art-rock videographer/archivist Malachi Ritscher self-immolated as a demonstration of opposition to the American wars. Near a sign that said, “Thou Shalt Not Kill–As Ye Sow So Shall Ye Reap,” and in front of a steel sculpture called “The Flame of Millenium,” Malachi, draped in an American flag, set himself on fire while his camera filmed his death. His actions received relatively little media coverage, despite (or because of) the poignant immensity of their meaning.