Excerpts from Lives of the Saints 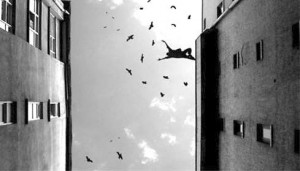 And what happens when you don’t take
the medication?

I’m a danger to myself and others.

Is that your opinion, or someone else’s?

I think we’re in agreement on this one.

What happened before you had the
medication?

I would eviscerate things with my teeth.

What kinds of things?

No, but it was only a matter of time.

I fantasized. The cat. My little brother.

Do you think you really would have done
that?

Maybe not the cat–what does she
know, it’s not her fault.

And your little brother?

Is a swine–I despise him. I’d be doing
him a favor.

Why do you say that?

His life is a torment, so he torments
others.

What are you so angry about?

I sound disgusted. There’s a difference.

And what is that difference?

I would’ve thought as a shrink you could
figure that one out for yourself.

But I’m asking you.

Alright, what about your parents?

What about my parents?

Tell me about them.

It must be hard being you.

Better than being you.

Do you think my life is so bad?

You’re an asshole. And I don’t even think
you’re well meaning.

I’m here to help you.

I can’t. There are rules; you know that.

See what I mean? You’re an asshole.

I’m an asshole because I won’t break the
rules for you?

Because you’re like some kind of gyne-
cologist of the mind. You get your jollies
lording it over women you pretend to
care about.

Pretty sophisticated thinking for a teenager.

Thanks for reminding me– I almost
forgot about the condescension.

And you dye your hair.

Many men dye their hair nowadays.

You dye your hair.

I’m not trying to hang on to the last
vestiges of my miserable youth.

What are you trying to do with it?

I’m trying to get over it.

Who wants to be young in your world?

Other generations have certainly had it
worse than yours.

Other generations didn’t have to live in a
world where everything’s for sale –
even some shrink’s phony compassion.

You know I’m not going to justify my
fees to you.

I don’t see how you could.

This is not about the money.

Well, I think we’ve gone about as far as
we can for this session
What, you’re not going to try and fuck me?

Not today I don’t think.

It doesn’t matter what I think– our
time’s up for this week.

Oh, I get it–you left the viagra in your
other pants. Just as well, I guess.

I think the medication’s wearing off.

When I was discharged they told me the
problem was that I was durable but not
resilient.

Did they explain to you what that
meant?

They said I had worn well, but I didn’t
appear to be bouncing back.

Bouncing back from what?

And so they discharged you?

And where were you discharged from?

It’s difficult to say–either the military
or a mental institution.

Do you know the difference?

Do you know the difference?

Between what and what?

Between the military and a mental
institution.

Oh, yes: in one they make you wear a
uniform.

Do you recall which one?

What did you do when they told you you
were to be discharged?

I said, “You can’t do this to me, I’m the
President!”
You were President at the time?

Or so I thought. They seemed not to credit my claim. Inevitably I began to question it myself.

You don’t think it was inevitable?

I merely raised the question.

You have never suffered the steady erosion of the spirit.

Perhaps, perhaps not–but it is identity we are here concerned with, not the spirit.

Are they so easily separable?

So you came to conclude that you were no longer President?

That perhaps I had never even been President.

Is it so important to be President? Not in itself– I’m not much for honorifics–it’s just that, well, if I’m not the President, who am I?

We all ask ourselves that same question from time to time.

You mean, you think you are the President also?

No, I mean we–the staff here–ask ourselves, if he’s not the President, then who is he?

Well, while it would be going too far to say you are intelligent, you are not without a certain native shrewdness. Your shallow affective life is masked by your skill at anticipating what others wish to hear, then tailoring your self-presentation to their desires. Curiously, in your inability to determine where you end and other people begin, you exhibit symptoms of the narcissism so prevalent in 21st century consumer society, while your simultaneous desires to both dominate and be dominated are the sadomasochistic components of a more archaic authoritarian personality type. In observing you I have been reminded of nothing so much as a quote from Albert Speer, Adolf Hitler’s architect and munitions minister, to the effect that, when surrounded by Hitler and his cohort, he could not shake the suspicion that they were all–himself included–little more than a pack of bullying schoolboys masquerading as great men. While he himself did not seem able to make the larger connection, I think this insight could easily be extended to include all such “great” men, even those supposedly genuine ones he thought they
were impersonating. After all, I think you’ll agree that great men are only great insofar as millions of others are willing to embrace their own diminution, no? So, yes, you could indeed be the President, of this or any country.

I see what you’re saying…not really conclusive, though, is it? Well, if it helps at all, I do recall another difference. Between?

The military and the mental institution. Yes?

In the one you are sometimes required to roll a fragmentation grenade into your officers’ tent, whereas in the other there is generally a strict prohibition on the issuance of munitions to the inmates. But you still don’t recall which is which? No. Should I?

Do you know why you’re here?

You were ordered to follow orders, were you not?

Well, yes, I suppose so…

You suppose so? Were you or were you not?

Yes what? Yes you were ordered to follow orders, or yes you were not?

You are not being very cooperative my friend.

Yes. I want to look on the bright side, you know, like, sunny side up.

Sunny side up–what does this mean? It means, like, the glass is half full. Glass? What glass?

It’s not anybody’s glass, it’s just a way of looking at things. If you say the glass is half full you’re, like, sticking to the bright side, you’re not giving in to despair. Despair? Most people despair when they have no wine –why would you despair with half a glass?

Some people are just built that way, I
guess; they’re always looking on the dark
side.

Are you one of those people?

I’m trying not to be–I’m trying to be
thankful for what I’ve got.

And what have you got? A glass half full
of wine?

I’ve got the sun in the morning and the
moon at night.

These are your personal possessions?

The world belongs to everyone. The best
things in life are free.

No, I mean, like, even if I don’t have
any material goods, I’ve got life, and the
natural world, and God’s bounty.

How will you know, if we put you in
a dark, windowless cell and leave you
there?

Well, I just don’t want to give in to
despair is all.

Perhaps you should. Perhaps it would do
you good to see what it is like. Tell me,
have you ever been tortured?

Americans are not tortured?

Well, I should hope not.

Do you trust that we will not torture
you?

Well, why would you?

Perhaps our glass is half empty. Perhaps
we’ve already given in
to despair. Perhaps we just enjoy seeing
other people suffer. Or perhaps we hate
you and everything you stand for.

I don’t stand for anything, I’m just me.

You Americans, you have such a way
with words.

It wasn’t meant as praise. Tell me, have
you ever wondered what it would be like
if you did give yourself over someday to,
say, despair, or rage, or hatred?

My guess is, bad things happen when
you do that.

Alan Franklin has written for the Fifth Estate, Daily Barbarian and Modern Citizen magazines, though most of his creative energies for the past 25 years have gone into writing and performing with Detroit’s anarcho ska-punk band, the Layabouts. The pieces here are taken from a larger work in progress, Lives of the Saints. Excerpts from this and other works have previously appeared in Dispatch Detroit and Semiotext[e]USA.