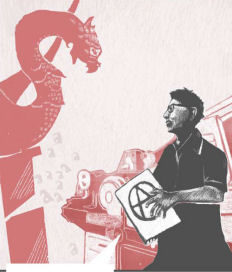 “Underground presses cannot survive within capitalist society. They are created only in order to destroy capitalist relations.”
–Fredy Perlman

FREDY PERLMAN was a radical activist, college professor, writer and publisher whose philosophy has had a significant influence on modern anarchist thought. His most well-known book, Against His-Story, Against Leviathan!, uses Thomas Hobbes’ metaphor of the Leviathan (a huge, monstrous beast that represented the power of a strong government authority) to criticize the rise of modern statist, capitalist civilization. He also helped found the Detroit Printing Co-Op and the anarchist publishing company Black and Red Books. He died in 1985.