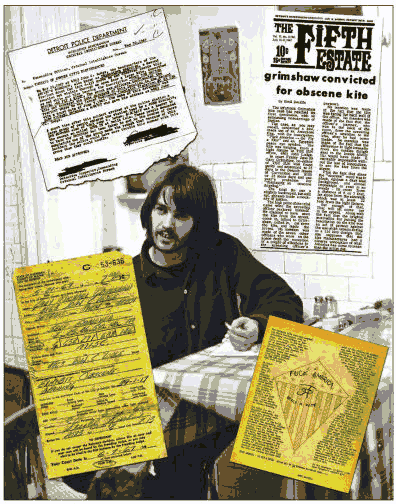 The passing of graphic artist, Gary Grimshaw, is mourned by his family and all those who knew him, as well as the rock and art community.

Gary was internationally known for his rock posters that began with those he created for Detroit’s Grande Ballroom in the late 1960s and early 70s. A friend of Detroit’s influential MC5 band and the Fifth Estate, he designed logos for both including the one for our then tabloid newspaper on the opposite page.

Gary’s posters, now expensive collector’s items, included images of the major rock figures of the early era. He continued working in the genre featuring new bands almost up to the time of his passing.

“The Obscene Kite Incident” occurred in 1966 when the offices of the Detroit Artists Workshop were visited by local cops who arrested Gary, a Navy veteran, after seeing a kite with the legend on it, “Fuck America; Go Fly A Kite.” Charged with obscenity, he was acquitted at trial.

The page opposite is from Detroit Rocks: a Pictorial History of Motor City Rock and Roll: 1965 to 1975, which Gary designed and features many of his posters, plus text and photographs of the era by co-author, Leni Sinclair.

The book is available from detroitrocksbookproject.blogspot.com.