Neither East Nor West

How a small group of anarchists took on the Soviet Union and won!

During the Cold War period, there was a sector of anarchists/left-libertarians in the West who took special interest in developments and repression in the Soviet Union and Eastern Bloc countries.

Their interest was in part due to the ultra-closed nature of Soviet Bloc societies and the lack of information about activism within them that wasn’t Western oriented. 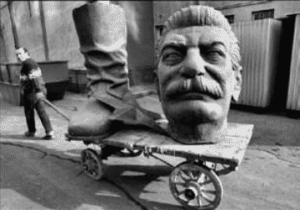 Also among this milieu’s interests was to counter the way even many anarchists treated communism as a secondary concern, if at all. They saw official state communism and fascism/Nazism as twin totalitarianisms, opposing both with equal vehemence, and refused collaboration with Leninist groups on principle.

This changed in 1980 with the formation of Poland’s Solidarity free trade union. With a nationwide general strike and 10 million workers signing on, Solidarity exploded communism’s frontiers.

A group of anti-authoritarians in the New York area took advantage of Solidarity’s opening to form the group, Neither East Nor West-NYC (NENW-NYC), comprised of individual anarchists, members of the Workers Solidarity Alliance, but including the (now disbanded) anti-authoritarian Revolutionary Socialist League, all of who had been doing Solidarity support.

In 1983, along with soviet exiles in the U.S., this crew and others formed the New York Trust Group (NYTG), a sister organization to the Moscow Trust Group (MTG), a semi-above ground and much persecuted anti-nuclear organization in the Soviet Union. Following the lead of the Moscow initiative, other Trust Groups formed in the USSR.

Being involved with fighting dictatorships automatically thrusts one into political prisoner support efforts. The NYTG acted, in part, as a de facto Anarchist Black Cross (ABC) section, bringing prisoner activism regarding the East Bloc to the attention of anti-authoritarians.

One successful campaign after another was launched against repression of the Soviet Trust Groups and for their prisoners utilizing petitions and pickets at the USSR New York consulate. Others around the U.S. and the world also picked up this work, some forming Trust Groups, many being anarchists.

Among the NYTG successful campaigns were freeing MTG member Nina Kovalenko from mental hospital incarceration (where many were tortured and force-drugged as she was), getting Truster Alexandre Shatravka paroled from his 7-year labor camp sentence (an unheard of precedent-setting victory), springing Yuri Popov of Moscow’s counterculture/pacifistic/anarchistic Free Initiative from a mental hospital, and saving MTG leader Nikolai Khramov from being forced into exile. The Soviet Trust Group wanted “mutual citizens based campaigns” to link Easterners and Westerners in common effort.

Although much of the activity was a one-way street with us facing one East Bloc human rights emergency after another, the Soviet Trusters also supported struggles abroad. For instance, the MTG protested the jailing of U.S. draft registration resister Andy Mager, and the Lvov (Ukraine) Trust Group sent a solidarity message to a demonstration at the Pentagon against U.S. imperialism in Central America (linking it to fighting Soviet imperialism in Afghanistan).

The high point of NYTG work culminated on August 3, 1986 in Moscow’s Gorky Park. After months of secretive preparation, American members of the NYTG and Brits from U.K. Trustbuilders accompanied by the MTG in a post-Chernobyl (and symbolically timed for the Aug. 6 anniversary of the Hiroshima bombing) anti-nuclear leafleting at the park entrance. We unfurled a banner reading, “No more Hiroshimas, No more Chernobyls: Peace and Environmental safety for all.”

The team was, as expected, busted in five minutes and detained by KGB agents in dark overcoats. Arrested were Ann-Marie Hendrickson and myself from the NYTG, Peggy Walford and David Barnsdale from the U.K Trustbuilders, and Nina Kovalenko from the MTG.

The action garnered page two and three page coverage in major newspapers worldwide. One week later, Elizabeth Abrahm and Angela Mugan from the U.K. Greenham Common Women’s Peace Encampment repeated the action at the Moscow Zoo, but this time didn’t get detained although they were surrounded by militiamen. Glasnost was beginning to flower (unknown to many is that it began with Chernobyl), and savage repression against the Trust Group was abating, pretty much ending with the Moscow actions.

Sergei Batovrin, the Moscow group representative in the NYTG, concluded that the special support work could then be brought to rest. One reason for the “Mission to Moscow” was to solidify an umbrella of protection Western anti-nukers had provided the Trust Groups (in this case, by brave action and publicity) against complete annihilation such as other dissident groups suffered at the hands of the KGB.

The MTG took a gamble that if they supported disarmament like the Soviet state propaganda machine advocated, then they might survive. The anti-nuke movement in the West was watching and the Soviets didn’t want to risk losing disarmament support if the Trusters were smashed. The Soviets were trapped by their own propaganda.

The Trust Group work was a resounding success. The MTG formed as a brilliant way to prick open a hole in Soviet despotism by creating a “peace portal,” taking advantage of Soviet propagandizing around “peace” the way the West countered with “democracy” propaganda. Though victimized daily (unending surveillance, detentions, house arrest, beatings, torture, and two executions), partly through our help, they survived much to the astonishment of Soviet-watchers, the human rights establishment, and even themselves.

During this period we continued our Polish work and were involved where possible with other East Bloc countries, for instance, in protesting repression of Czechoslovakia’s Charter 77 dissident human rights group.)

In fall 1986, many of those involved above plus others (including New York ABC) formed NENW-NYC to continue the work, but solidifying the agenda of mutual solidarity with all the people in the East. Not only did we picket for imprisoned Polish draft resisters, but the Poles were asked if they could manage (their conditions being far more repressive), to support struggles here.

And, yes, they did; for instance, with petitioning in favor of NYC bike messengers fighting an attempted ban of bikes in part of midtown Manhattan. (Both campaigns winning!)

In fall of 1987, we published our first issue of On Gogol Boulevard, chronicling the news of not only the traditional Eastern dissidents, but of the newer peace, green, gay, feminist, youth, counterculture, anarchist, democratic socialist, and other oppositions.

Political prisoner news was right up front, with a number of OGBs having a section on repression and political prisoners in the U.S., bringing Easterners a trustworthy source (anti-communist, giving us credibility) of anti-Western information. OGB was a networking tool providing contacts, names, addresses, phone numbers, languages spoken etc. for alternative oppositions in East and West. It was an immediate hit; nothing like it was being published anywhere.

Like with the Trust Group, other NENW groups sprang up. Prominent among them in North America: Toronto-NENW, Bay Area CA-NENW, Lawrence KS-NENW, Albany NY-NENW, Latin America/Miami FL-NENW, Mexico City-NENW, Chicago-NENW and others. We formed the North American East/West Network of almost 40 groups, and networked with contacts around the world, many in the East, some of whom by this time were openly identifying themselves as anarchist. OGB was the chief means of communication and networking.

Among NENW-NYC’s activities during the 1980s were numerous campaigns against repression and support for political prisoners, including mutual coordination with Moscow’s Free Initiative, the twinning of Soviet prisoner, Sergei Troyanski of the Free Initiative, and U.S. prisoner, Rainbow Hawk of the Rainbow Family, both busted on fraudulent drug charges in politicized trials involving their peace/counterculture/anarchist activism. We initially twinned him with two Moscow anarchist punk political prisoners. The two and Sergei, and eventually Rainbow, were freed thanks in part to the work of the ex-USSR Confederation of Anarcho-Syndicalists.

We and others petitioned and picketed for Polish anti-authoritarians in the Polish Socialist Party (Democratic Revolution) and anarchists in Poland’s Freedom and Peace group who were denied passports and freedom of travel. All were given their documents.

In communist East Germany, a number of leading anti-authoritarians were arrested. We immediately picketed U.S. East German consulates. All the East Germans were quickly released and expelled to the West, but were allowed to return home after a short time; another precedent setting victory.

We used this needed concentration on Eastern political issues as a doorway to incorporating the concerns of and making contacts with land-based Indigenous peoples, with a particular focus on supporting activists with anti-authoritarian and anti-Stalinist perspectives. We brought contacts and news about the 3rd and 4th world to the East Bloc they wouldn’t ordinarily get, like trustworthy news about the U.S. invasions of Somalia and Haiti. It was done by mailing Easterners anarchist and other anti-U.S. publications and literature that reported on the South.

We and the Workers Solidarity Alliance conducted a large, worldwide campaign for the release of four political prisoners from Nigeria’s anarchist Awareness League: Udemba Chuks, Garba Adu, Kigsly Etioni, and James Ndubuisi. In yet one more precedent, the four were the first prisoners to be allowed bail under an emergency decree.

Fifty-nine articles in 16 languages were published on the case from as far away as Turkey, Estonia, South Korea, and South Africa. There were seven demonstrations at Nigerian consulates on an international day of action in February 1993 including Moscow, Rio de Janeiro, Dublin, New York, London, Berlin, and Hamburg, with Norway and Bulgaria lacking targets. The Nigerian state then left the dissidents alone.

Prior to the Awareness League campaign we ran a similar large scope worldwide protest for NYC’s Tompkins Square Park anarchist activist political prisoner, Kenny Tolia. Tompkins Square Park, on New York’s Lower East Side, was popular among the homeless for hanging out and camping. As part of the city’s gentrification war, the park was closed in August 1988 with the homeless and squatter supporters being violently ejected in a bloody police assault.

Kenny was unfairly found guilty on a riot charge. We were asked to work on his campaign too late, after his trial was over, but he had a great morale boost by actions on his behalf at U.S. embassies as far away as Minsk, Warsaw, Mexico City, and Moscow. People were in the streets for him (with the Poles suffering beatings and arrests for their efforts).

We took on the case of New York City punk promoter, Bob Z, who pasted flyers for his shows on lampposts and abandoned buildings, incurring the wrath of the city. Along comes Big Brother who writes him not one summons, but 3000! We asked the Poles for help and sent them a photo of Bob with a grin and his hands choking with the summonses. The Poles and their Freedom and Peace group responded with hundreds of signatures on petitions.

I handed them to the judge at Bob’s trial through radical civil rights attorney, Ron Kuby, and the embarrassing case folded. Smartly done consistent protest, with planetary coordination, can get the goods.

NENW-NYC was a specialized Anarchist Black Cross group filling a void, dealing mainly, but not exclusively, with East-West matters.

In non-ABC work, we were the first to coordinate planetary demonstrations against the West’s multinational financial imperial agencies such as the World Bank and IMF, with an appeal in 16 languages. We also raised money for Prague’s huge Ladronka squat along with the NYC punk club, ABC No Rio.

By the early 1990s, On Gogol Boulevard ceased publishing, but lived on as a section in many publications such as the Fifth Estate, Profane Existence, Black Fist, The Shadow and The Torch/La Antorcha.), which we mailed to hundreds of our major contacts mostly in the East.

For most of our history, with the strong exception of ABC activists in New York and Toronto, and the U.S. ABC-affiliated Bayou La Rose newspaper, we had little or no contact with other ABC groups.

In fact, ABC seemed to be a mostly nominal affair by this time. Happily, today that’s changed with the renewed formation of organized and coordinated ABCs.

Bob McGlynn lives in Yonkers, N.Y. He is an NYC bike messenger and founding NENW member. An earlier version of this appeared in The Utopian.