An anchor for the anarchist community 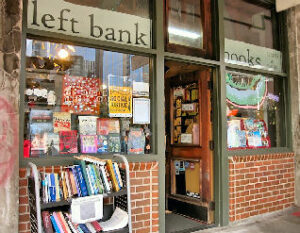 Good news! Seattle’s Left Bank Books is republishing Letters of Insurgents, Fredy Perlman’s historical novel about love and revolution in the East bloc and Western states of the mid-20th century.

The book was written in the mid-1970s and first published by Black & Red and printed at the Detroit Printing Co-op, both projects initiated by Fredy and Lorraine Perlman. The B&R Co-op began in 1970, three years before Left Bank Books (LBB) was established.

B&R publishers, the Detroit Co-op, and LBB were products of the revolutionary ferment of their times. Like the printing co-op, the bookstore was established as a collectively operated project in which all participants have the opportunity to learn and perform all functions involved without the impediment of bosses or managers.

So, it is fully appropriate that LBB is undertaking the republication of this book in response to the interest of a new generation almost forty years after it first appeared.

As a small radical independent bookstore run on a non-profit basis, Left Bank Books aims to earn enough to pay the rent, minimum wage to the core collective members who anchor the record keeping and other essentials, and have enough money left to order books, as well as to publish books and pamphlets of specific interest to anarchists and anti-authoritarians.

The store also serves as a place where anarchists and other radicals volunteer and get to know each other by operating the store, hear anarchist and other authors give readings, view relevant films, and where discussion groups meet.

However, times aren’t easy for any independent radical bookstore, largely due to the machinations of notorious online stores such as Amazon and competition from chain bookstores.

Left Bank Books will continue as the valuable resource it has been for the last 41 years only if we support it by buying books, pamphlets, zines, etc., and donating money when possible.

Visitors are welcome at the store in downtown Seattle. You can purchase books and pamphlets published by LBB online to support the project at leftbankbooks.bigcartel.com.

The latter include, in part, The Ring of Fire Anthology by ET Russian, Origins of the 1%: The Bronze Age by John Zerzan, More Noise Please! by Steven Jesse Bernstein. And older but still relevant pamphlets including, The Kronstadt Uprising of 1921 by one of the LBB founders, Lynne Thorndycraft and Seattle General Strike: Account of the Seattle General Strike of 1919.

See also review of Letters of Insurgents on page 31