Out of this sultry subtropical environment has sprouted Burnpile Press. Founded in 2012, Burnpile is an informal, community supported project dedicated to producing, printing, and distributing radical literature free-of-charge. They often distro as many as 200 Fifth Estates each issue as well as Berkeley’s Slingshot periodical, and many other radical used books, zines, and accessories at no cost to the reader. With no current info-shop location, all material is literally hand distributed through face to face interactions with those living in the region. 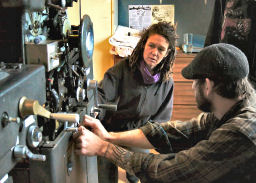 Burnpile Press works for the end of all forms of oppression, hierarchy and domination from within a community saturated in oppression, hierarchy and domination. North Florida, its home base, bleeds with the living memory of occupation. It is a region known for the longest continuously-occupied, European-established settlement in North America. This is the Dixon bioregion, a salty, pine-studded land belonging to the echoes of the long ago exterminated Timucua people, belonging to the alligators sliding into tidal marshes while little blue herons pierce the dark, muddy waters and belonging to the vigil for Jordan Davis, murdered for listening to rap, and the continuing reverberations of loud music humming on quiet nights.

The micro-press cries out from the center of Jacksonville, Fla., a city named for Andrew Jackson and his state-sponsored maniacal ethnic cleansing rampage of manifest destiny against the indigenous of the Southeast.

In this environment, painted over and again with injustice, Burnpile Press shouts out: “Do it yourself. Do it together. Do it now.”

When you first visit the press’s new publishing house a few miles northeast of downtown, this mantra rings true. The dedicated crew has settled into a historic century-old residence where their antique AB Dick offset printing press sits in a quiet room patiently awaiting its next project.

The old bones of the publishing house and the classic footprint of the printing press find purpose in their function, as tools to distribute literature and build community, as entry points for cooperation, as a council for empowerment. There is an undeniable air of revolutionary spirit in these ageless tools, from fiery liberation through ink-stained pamphlets, to impassioned conversation beside brick-lined fireplaces.

Amidst the renovations of the 100-year-old house, there is buzz of the first literary project being created in their new workshop; a seven part micro-zine series entitled “Free Ourselves.” Each title in this series “introduces a topic relating directly to achieving greater autonomy and self-determination in our lives.” The first in the series is titled “Hire Ourselves,” a short introduction to worker-cooperatives, their history, and why they are good for our families and communities. With the next title, “House Ourselves,” an introductory how-to on liberating spaces and establishing social housing, already in the works.

Through the old, Burnpile has pressed into the new. While addressing the need of free print material to educate communities and individuals with limited or no access to the Internet, Burnpile Press is also working to radicalize and embolden the increasingly homogenized world of tech. On the digital side of the workshop even the least adept volunteers are assisted in learning the basics of how the Internet, encryption, programming, and design software work, while coupling the politics of open source software with the purpose and vision of a free and open society.

Although a debate continues about the role of technology in organizing and resistance, Burnpile recognizes the potential of direct democracy through technology, the power of code, the might of social media, the spark of viral action and the vulnerability of the rulers in this increasingly pervasive digital world.

Burnpile Press is a weed sprouting in the widening crack of capitalist empire. It is growing with a slow, steady, stubborn intention, pointing towards the hot Jacksonville sun, warmed by the salty winds of the Atlantic Ocean, reflecting a shadow upon the concrete of the establishment, showing another possible world, a future where decisions are based on consensus, and hands are gripped in mutual aid.

Matt Keene is a journalist and web designer who has written extensively on the Ocklawaha River, the Kirkpatrick Dam, and other Florida environmental and water-related issues. His web address is riverbedammed.org.