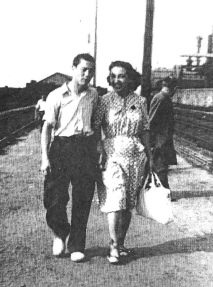 Next year will mark the eightieth anniversary of the beginning of the Spanish Revolution, an event which most of those involved with the Fifth Estate only learned of in the 1970s, but one which profoundly contributed to what the paper and the broader anarchist milieu have become.

The ideas and the practices of solidarity and mutual aid learned from the Spanish anarchists who lived through that moment taught people at the Fifth Estate and many others a lot that shaped who we are now. Knowing people like Federico and Pura Arcos, both veterans of the Spanish struggle who lived in Windsor, Ontario across the river from Detroit, helped younger anarchists think of an anti-authoritarian revolution of everyday life as a real possibility.

Despite the defeats and tragedies of that revolution, these Spanish anarchists witnessed and participated in an actual transformation of social relations, and they helped nurture the hope that it could be created again under new circumstances.

The 1936-39 Spanish Revolution is an inspiring event in many ways. It provides a multitude of real-life examples of how people can create a classless and stateless society, even if only briefly. During that revolution, millions of women and men took control of their own lives and organized themselves in neighborhood and workplace collectives, both urban and rural.

This tremendously creative insurgency gained strength in Spain from the previous seventy years of anarchist social and educational activities and organization building, in combination with rural agricultural communal traditions, all made more potent by the spontaneous inventiveness of individuals and small groups.

The very important role of women in that revolution continues to resonate with many today. In 1936, groups of women in Madrid and Barcelona founded Mujeres Libres (Free Women), an organization dedicated to the liberation of women from their “triple enslavement through ignorance, through the traditional social subordination of women, and through their exploitation as workers.” During the years of the Revolution, Mujeres Libres involved over 20,000 women and developed an extensive network of activities to help individual women grow, realize their potential and fully participate in creating a revolutionary anarcho-communitarian society

The women in the group were all deeply committed to the larger anarchist movement and its goals. But they felt that they also needed an organization dedicated to addressing the specific problems confronting them as women, whether in the movement itself or in the larger society

Pura Perez Benavent Arcos (1919-1995), companion of FE staff member Federico Arcos (1920-2015), was an active participant in Mujeres Libres, and was, for those who came to know her later, a living connection to the ongoing popular resistance to authoritarian domination, and a link to the positive self-organized collective activity which flowered during the Revolution.

She helped perpetuate the traditions of anti-authoritarian solidarity and resistance for younger anarchists living outside the Detroit-Windsor area, as well as those living there.

Pura’s father and grandfather were both transport workers and members of the Confederacion Nacional del Trabajo (National Confederation of Labor, CNT), an anarcho-syndicalist trade union federation. She grew up in Jativa, a village near the city of Valencia, hearing discussions about social injustice, and the need for improving life for all people.

Although most girls and women in Spain did not go to school, or even learn to read and write before the 1930s, Pura was very interested in obtaining an education. She prevailed on her parents to allow her to attend elementary school at the Escuela Moderna (Modern School) with an older cousin who was living in her home.

The Modern Schools were founded in Barcelona by radical educator Francisco Ferrer whose goal was to “educate the working class in a rational, secular and non-coercive setting.” In the Escuela Moderna, students were not forced to memorize lessons, but learned by pursuing their interests.

Pura went to work at age thirteen to contribute to her family’s income, but was able to continue her education in the evening at the Escuela Natura, a rationalist school modeled on the modern schools. In that school she met other young people who were concerned about social issues and became involved in the anarchist movement.

Later, Pura participated in the Ateneo Libertario, an anarchist storefront school and cultural center in Barcelona, where she first met Federico.

In 1936, she became very active in the local federation of the Barcelona Mujeres Libres and was a member of the organization’s national sub-committee.

From 1936 through 1939, she participated in branches of the CNT, FAI (Federacion Anarquista Iberica, the Iberian Anarchist Federation) and the Federacion Iberica de juventudes libertarian (the anarchist youth organization), often serving as recording secretary during meetings.

When the opportunity arose to teach children at one of the rural collectives in Tabernes de Valldigna, south of Valencia, Pura eagerly accepted.

As she and Federico both described it, life in such collectives was like a big family with fulfilling experiences, where people were devoted to each other and to their ideals.

When the Revolution was crushed by the fascists in 1939, Pura chose not to flee the country, but went into hiding. Later, she moved back to Barcelona with her family, living secretly with them for two years. If the fascists had found her, she would have been one more in the long list of those executed by the Franco regime.

In 1959, Pura emigrated to Canada with their young daughter to join Federico. There she learned English, worked as a nurse’s aid, and collaborated by correspondence with the libertarian press, particularly the Boletin de Mujeres Libres (edited in London from 1963 to 1977), and with the magazine Mujeres Libertarias (Anarchist Women), until its demise in 1993. She supported Canadian women’s and peace groups as well.

At a crowded memorial to Pura in 1995, FE staff member Marilynn Rashid observed: “As all their friends knew, Pura always tempered Federico’s romantic memories of the Spanish Revolution with her very sharp, opinionated realism.

“Pura was a woman who, because of her involvement in the Mujeres Libres and the Anarchist cooperatives, knew all about the potential for true liberation and for sexual equality. And so she knew and understood, too, the frustrations we all experience…the failure of those projects to achieve the expectations we have for them.

“Federico, for example, would describe with his characteristic fervor a meeting of the anarchists with [Spanish militia leader] Durruti, and Pura would remind us of the women in the back rooms working and cooking to feed all the men. One story did not negate the other: rather, each enriched the other and made us understand the complexity of that time.”